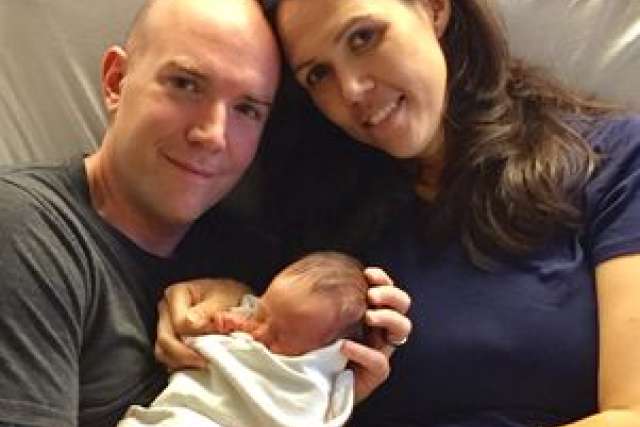 When mom-to-be Malisa was just a few weeks away from delivering her first child, she felt a sudden pain in her chest while at the movies with a friend.

Her doctors ruled out any problems with the pregnancy but did learn she had a rare, life-threatening heart condition called an aortic dissection, a tear in the aorta located just above the aortic valve involving the arteries that take blood to the heart and brain. The condition often leads to sudden death, but with unusual luck she was able to survive.

Once diagnosed, Malisa, who lives about 80 miles from Los Angeles, was airlifted to Ronald Reagan UCLA Medical Center on Tuesday, June 13. Her husband Josh, a master sergeant in the U.S. Air Force, was on assignment in South Korea and quickly made arrangements for the 10-hour flight back to California. (The couple asked that their last names not be included.)

“The doctors explained that they were going to perform the cesarean to save the baby, and while I was still under they would immediately start on the heart surgery,” Malisa recalled. “My first question was, ‘How long can we wait until my husband gets here?’”

But because of the seriousness of her condition, the doctors did not want to delay treatment and she was in the operating room by 9:45 that evening. A team of 23 specialists assembled, including heart surgeons, obstetricians, anesthesiologists, neonatologists, nurses, a perfusionist, plus experts from respiratory therapy and neurophysiology.

“We went ahead and delivered the baby by C-section, which went smoothly after very extensive preparations were made,” said Dr. Carla Janzen, an associate professor of obstetrics and gynecology at the David Geffen School of Medicine at UCLA, who led the team that delivered the healthy baby boy a little after 10:30 p.m.

Then the heart surgeons took over.

“As the baby took his first breath and cried, I immediately knew that I had to go in and save his mother,” said Dr. Richard Shemin, Robert and Kelly Day Chair of Cardiothoracic Surgery at UCLA.

Shemin replaced Malisa’s aortic valve, reconstructed the major arteries to the heart, arms and brain and created a new aorta.

The combined operations ended around 4 a.m. on Wednesday.

A weary and worried husband Josh arrived at UCLA on Wednesday afternoon. The first words he heard from the medical team were that Malisa and baby were fine.

“There are things in life that bring you closer together,” Josh said. “And this is one of them.” The couple now looks forward to their son, Connor, growing up and doing all the family activities they talked about like camping, hiking and going to the beach.

“It’s a once in lifetime opportunity to put together a team of experts to pull this off,” Shemin said. “It’s one of the privileges of working at a place like UCLA where you have everything available to perform complex, multi-team operations culminating in a happy ending.”