UCLA-led research finds vaccines against anthrax, plague and tularemia are effective in mice

If tests in humans are successful, the advance could provide protection against a bioterror attack 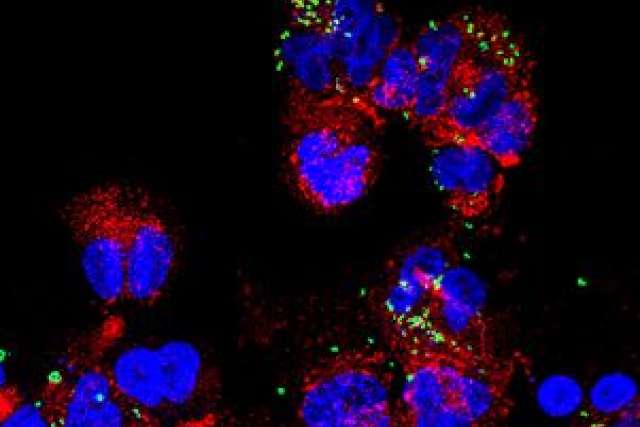 The bacteria that cause tularemia (green), shown infecting a type of white blood cell called a macrophage.

Anthrax, plague and tularemia are three potent agents terrorists would be likely to use in an attack, according to the Centers for Disease Control and Prevention. Each is highly and quickly lethal to humans. But there are no licensed vaccines for tularemia and plague, and although there is an anthrax vaccine, it requires a burdensome immunization schedule and has severe side effects.

Now, a UCLA-led group of researchers may have found a solution that, if found to be safe and effective in humans, could protect people from all three bacteria. The team used molecular engineering to develop vaccines against each that use a common delivery method, or “single vector,” to carry protective antigens to the immune system.

The findings were published May 3 in Scientific Reports.

“Relying on currently available antibiotics to counter an intentional outbreak of anthrax, plague or tularemia is not a pragmatic public health plan — vaccines offer the only practical protection,” said Dr. Marcus Horwitz, the study’s senior author and a distinguished professor of medicine and of microbiology, immunology and molecular genetics at the David Geffen School of Medicine at UCLA.

“Vaccines utilizing a single vector that could be administered concurrently and protect against all three pathogens would be more acceptable to people than multiple unrelated vaccines requiring different immunization schedules, and be less costly because they would be simpler to manufacture.”

The delivery vehicle the researchers used is a weakened version of an unlicensed tularemia vaccine known as live vaccine strain, or LVS, which in turn is a weakened version of an organism closely related to the one that causes tularemia. The unlicensed live vaccine strain vaccine is toxic to humans; the researchers made it safe and nontoxic by deleting a gene from the original version. They used this delivery method to formulate vaccines against each of the three pathogens, which are classified as tier 1 select agents because U.S. government agencies have determined that they are among the likeliest to be used in a bioterror attack.

The researchers immunized laboratory mice with the three vaccines. Four to six weeks later, they administered lethal doses of anthrax, plague and tularemia bacteria by replicating the airborne method terrorists would be likely to use in an attack.

The researchers then compared their new anthrax vaccine to the licensed anthrax vaccine. The one they developed was more effective, especially when administered via injection, than the existing vaccine.

They also compared the tularemia vaccine they created with the unlicensed LVS vaccine. The new vaccine was safer and as potent — or more potent, depending on how it was administered — in protecting mice from respiratory distress caused by tularemia bacteria. When it was administered twice by injection, the new vaccine protected about half of the animals; when it was given twice or three times through the nose, it protected all of them.

The researchers’ next steps will be to improve the vaccines and test them for safety and efficacy in a second animal model, as required by the U.S. Food and Drug Administration. After that, the vaccines would be tested in humans.

The research was funded by the National Institutes of Health. The study’s co-authors are Qingmei Jia, Barbara Jane Dillon, Saša Masleša-Gali?, Brennan Chang and Austin Kaidi of UCLA, and Richard Bowen of Colorado State University.