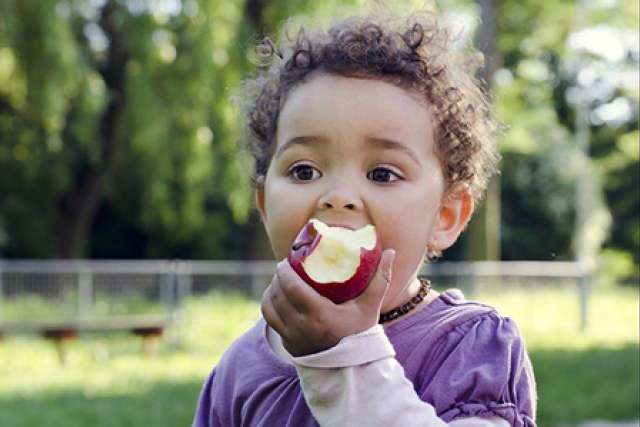 In 2009, WIC added fruits, vegetables and whole grains to its food packages, and reduced the amount of juice, milk and cheese it included.
April 23, 2019
Estimated read time: 4 minutes

Sweeping changes designed to make the food more nutritious in a federal assistance program for low-income families reduced the risk for obesity for 4-year-olds who had been on the program since birth, according to new research.

The study of the Special Supplemental Nutrition Program for Women, Infants and Children, or WIC, was conducted by researchers from the UCLA Fielding School of Public Health, Tulane University and Los Angeles-based PHFE WIC, the nation's largest local WIC agency and a program of Heluna Health.

WIC is a federal nutrition assistance program for pregnant, breastfeeding and postpartum women, as well as infants and children under the age of 5 who live in low-income households.

In 2009, the program overhauled its food packages to make them more healthful by adding fruits, vegetables and whole grains, and reducing the amount of juice, milk and cheese. It also cut the fat levels allowed in milk and calibrated infant formula amounts to meet the caloric needs of young infants from birth to age 1.

Published in the American Journal of Clinical Nutrition, the new research is among the first to use a rigorous research design to demonstrate the impact of those changes on the obesity risk and growth trajectories for different groups of children in the program. It is the most comprehensive study of the effect of these changes on obesity risk in Los Angeles County, where more than half of all children under age 5 are enrolled in WIC.

The findings could apply to children in other parts of the U.S., said Catherine Crespi, a co-author of the study and a professor in residence of biostatistics at the Fielding School.

"Our study shows that providing healthy foods early in life reduces obesity rates among young children in low-income families," Crespi said. "And because heavier children tend to become heavier adults, our study suggests that improving the diets of young children is an important strategy for addressing our national obesity epidemic."

The researchers examined health and population data from more than 180,000 children served by the WIC program in Los Angeles County. WIC serves more than 400,000 residents per month in the area, and PHFE WIC has compiled extensive health data on participants since 2003, with funding from the nonprofit First 5 LA.

When researchers examined growth trajectories between those two groups, they noticed the sharpest differences began to develop at 6 months of age, suggesting that a more nutritious diet set a course for healthier growth early in life.

"The beneficial effect of being exposed to the new food package, compared to the old one, was much stronger during the 6 months-to-1-year age interval," said Pia Chaparro, the study's lead author and an assistant professor of nutrition at the Tulane University School of Public Health and Tropical Medicine. "This difference between the two groups during this age interval was large enough to set children in the new food package group on a healthier growth trajectory through age 4."

Analyzing statistics for children who joined WIC at age 2, researchers found an 11 percent lower obesity risk for boys receiving the new food package but no reduced risk for girls. It is not clear whether the disparity in risk reduction was due to biological or sociocultural differences, Chaparro said.

The study was funded by the American Heart Association.