A CT scan surprisingly revealed a clue to the cancer. 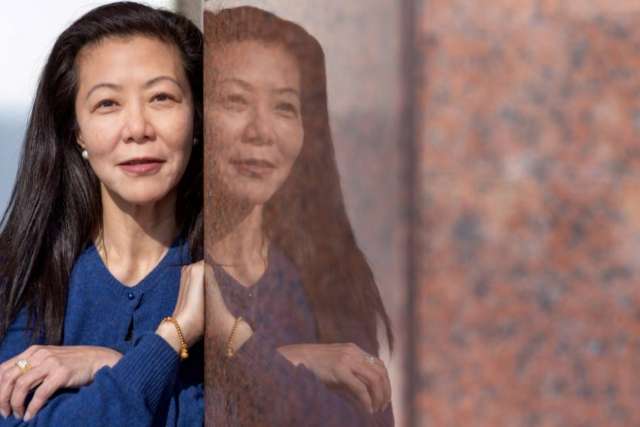 Diana Wei was pretty happy when she lost 5 pounds without trying.

But when her weight kept dropping, despite maintaining her regular diet and exercise routine, she started to worry a little. It was probably stress, she reasoned. She and her husband moved from New York to Los Angeles just as the COVID-19 pandemic started shutting things down across the country in March of 2020. Then she started a new job.

Wei mentioned the unexplained weight loss to her new doctor at UCLA Health, Shih-Fan Sun, MD. All her tests came back normal, so Dr. Sun asked Wei to return in six months. During that time, she had lost an additional 13 pounds, so he ordered a full-body scan.

About a week later, Dr. Sun called her just after 7 a.m. one morning.

“He said, ‘I wanted to catch you before you leave for work,’” Wei recalls. “‘We saw something on the scan. I think you should reach out to a pulmonologist.’

“That’s when I started to panic,” Wei says.

Wei had always been meticulous about preventive care, getting regular mammograms and pap smears “like clockwork.” She kept her blood pressure and cholesterol levels in the healthy range. She never smoked. Yet, at 59, she was diagnosed with lung cancer.

“When they told me I had lung cancer, my initial reaction was, ‘What are you talking about?’ I didn’t understand,” Wei says. “At first, I was really quite angry. I did everything I was supposed to do. I always get my checkups.”

The number of patients diagnosed with lung cancer who have never smoked has increased significantly in recent decades, says thoracic surgeon Jane Yanagawa, MD, a member of the Jonsson Comprehensive Cancer Center.

Wei’s case “points out how much more research we need in figuring out risk factors and demographic factors to help provide the same screening benefit we are making with patients who have a smoking history, to see how we can expand that for patients who are never-smokers,” Dr. Yanagawa says.

The National Lung Screening Trial — a large study examining how low-dose CT scans affect lung cancer outcomes in current and former smokers ages 55 to 74 — found that screening these patients could reduce their risk of dying from the disease by 20%. Lung cancer is the leading cause of cancer death in the U.S.

But there are other risk factors for lung cancer besides smoking, such as occupational and environmental exposures, genetic susceptibility and exposure to second-hand smoke — all of which are more difficult to quantify and investigate, Dr. Yanagawa says.

Lung cancer screening, however, is only recommended for current and former smokers.

“Right now, we have no way to identify who, among people who do not have a significant smoking history, will be important to screen,” she says.

Wei’s lung cancer was discovered incidentally — her doctor ordered a CT scan hoping for insight into her unexplained weight loss – not because of any suspected lung issue. The exam revealed a lung nodule that led to the cancer diagnosis.

Because the cancer was caught so early Dr. Yanagawa performed a “segmentectomy,” a smaller resection than the traditional lobectomy, which removes less tissue, thus preserving more lung function.

“It was a minimally invasive lung cancer that was caught really early, for which she had a lung-preserving resection, due to the small size of it,” Dr. Yanagawa says. “Her life is not expected to be impacted by this. She is essentially considered to be cured.”

The doctor adds, however, that a second cancer can develop, so patients are followed with regular CT scans.

So far, nearly a year after Wei’s diagnosis, her scans are clear.

The experience has given her “a brand new outlook on life.” “I don’t take my health for granted now,” she says.

She’s profoundly grateful to her doctors. And even though they never discovered what caused her weight loss, Wei is thankful that she listened to her body and asked for help.

“If it wasn’t for the weight loss, I would have continued doing what I was doing without a clue,” she says. “As women, we are so busy caring for our family and our work that we can kind of let things slide. But we have to be aware of our bodies and be vigilant – trust your instincts, and if something doesn’t feel right, tell your doctors and have it checked out.”