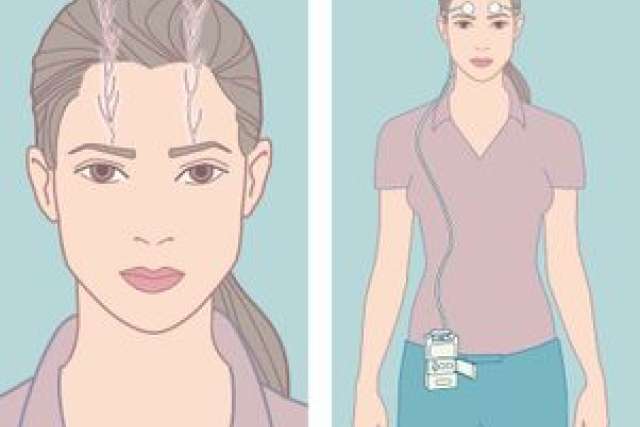 But in a just completed clinical trial, a unique nerve-stimulation treatment for intractable epilepsy reduced the number of seizures by more than 50 percent. In the March edition of the journal Neurology, UCLA neurology professor Christopher M. DeGiorgio and colleagues report the results of the long-term pilot trial, which demonstrated the effectiveness of the new treatment, called trigeminal nerve stimulation (TNS).

The trigeminal nerve extends into the brain from the face and forehead and is known to play a role in seizure inhibition. The stimulator, about the size of a large cell phone, attaches to a belt or can slip into a pocket. Two wires from the stimulator are passed under the clothing and connected to electrodes attached to the forehead by adhesive. The electrodes, which can be covered by a cap or scarf, transmit an electrical current to the nerve.

"People with intractable epilepsy who have continuing seizures are often drug-resistant," DeGiorgio said. "In addition, anti-seizure drugs can have significant side effects on thinking and alertness."

Epilepsy brain surgery can be very effective, he said, but some patients are not ideal candidates because there is no single focal point in the brain for their seizures.

A larger clinical trial to further test for safety and effectiveness is now underway. The investigators hope that eventually a device can be permanently implanted above the eyebrow that would stimulate the trigeminal nerve and replace the external device.

"TNS is a promising alternative mode of neurostimulation because the trigeminal nerve can be stimulated in minimally invasive fashion," DeGiorgio said. "The major branches of the trigeminal nerve in the face are located close to the surface of the skull; that allows physicians to assess response prior to permanent implantation of a future device.

"For all of these reasons, we need to find non-drug and non-surgical alternatives," he said. "The results of our study are very encouraging and support further investigation into the safety and efficacy of TNS.”

DeGiorgio and his colleagues are currently recruiting 50 patients, age 18 and older, with intractable epilepsy for the next phase of the clinical trial, which will stimulate the ophthalmic branch of the trigeminal nerve and will compare the use of a higher level of stimulation to the trigeminal with a lower-level frequency. For more information on this trial, call Diana Murray at 818-364-3104.

The UCLA Department of Neurology encompasses more than a dozen research, clinical and teaching programs that cover brain mapping and neuroimaging, movement disorders, Alzheimer's disease, multiple sclerosis, neurogenetics, nerve and muscle disorders, epilepsy, neuro-oncology, neurotology, neuropsychology, headaches and migraines, neurorehabilitation, and neurovascular disorders. The department ranked No. 1 in 2005 and 2006 among its peers nationwide in National Institutes of Health funding.