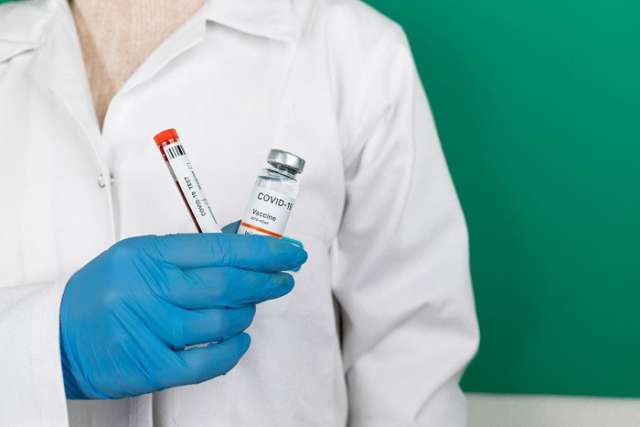 “These findings should be reassuring for the general public because lower amounts of virus might translate to decreased transmissibility,” said the study’s lead author, Dr. Paul Adamson

Vaccinated health care workers who experienced breakthrough COVID-19 infections during the winter of 2020–21 had lower viral loads than their similarly infected but unvaccinated co-workers, according to a new UCLA study.

The findings, published this week in the peer-reviewed journal Open Forum Infectious Diseases, show that infected workers who were fully or even partially vaccinated with either of the two mRNA vaccines authorized for use in U.S. had less of the virus in their test samples and were therefore less likely to “shed” — or orally or nasally expel — viral particles.

While the research was conducted prior to the recent delta variant surge, the findings are consistent with current data showing that those who are vaccinated are less likely to spread the virus, said the study’s lead author, Dr. Paul Adamson, an assistant professor of infectious diseases at the David Geffen School of Medicine at UCLA.

“These findings should be reassuring for the general public because lower amounts of virus might translate to decreased transmissibility,” Adamson said. “This is another benefit of the vaccines and yet another reason to get vaccinated against COVID-19.”

For the study, the researchers analyzed 43,516 COVID-19 tests administered to approximately 11,930 UCLA health care workers between Dec. 16, 2020 — roughly the time the two-dose Pfizer–BioNTech and Moderna mRNA vaccines became available at UCLA — and March 31, 2021. During the course of the study, 880 individuals tested positive for infection

The research team examined these workers’ vaccination status at the time of their infections to see who had received either of the mRNA vaccines and who had not been vaccinated. They also specifically measured cycle threshold, or CT, values from the COVID-19 tests of infected individuals. These CT values have an inverse relationship to the amount of virus one has: The lower the CT value, the higher the viral load, and vice versa.

Of the 880 total COVID-19 infections, 616 (70%) occurred among unvaccinated employees, while 264 (30%) occurred among those who had received at least one vaccine dose. The researchers then examined CT values for each infected employee, broken down into vaccination status and time categories:

The researchers noted that recent data suggest that viral loads of the delta variant — which became the dominant strain in Los Angeles County in May 2021, after the study period had ended — are similar in both vaccinated and unvaccinated people. But data also indicate that vaccinated individuals experience a more rapid decline in delta variant viral loads and clear the virus faster than unvaccinated people, which also helps to reduce viral transmission.

“SARS-CoV-2 viral loads are known to be a critical driver of transmission,” the researchers wrote. “Thus, our findings, using real-world data, suggest that COVID-19 vaccination might translate into decreased transmissibility of SARS-CoV-2 infections.”

The researchers said the study may have some limitations. For instance, they may not have captured variables such as age, infection onset and severity of symptoms, and collection and testing methods, which might have had an impact on CT values. In addition, the number of people with mild or asymptomatic infection may have been undercounted, possibly affecting the overall lower CT values across all categories.

This study was supported by the National Institutes of Health.