What is ataxia and how does it affect your brain? 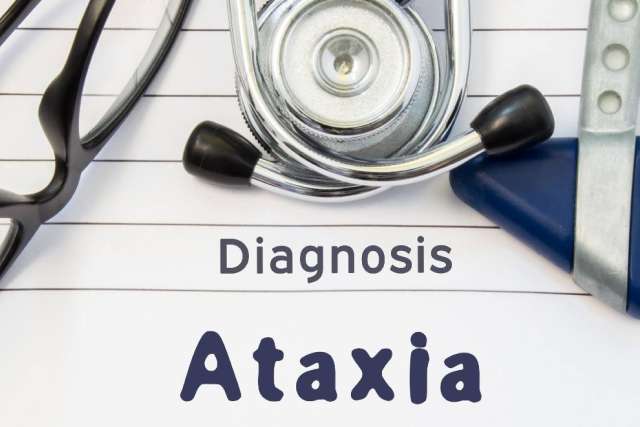 November 9, 2022
By Chayil Champion
Estimated read time: 3 minutes
In October, the NFL was forced to amend its concussion protocols for players following an investigation that determined the Miami Dolphins misdiagnosed their starting quarterback after a concussion. In doing so, they brought awareness to a medical term people may not have heard before: ataxia.

The revised protocols direct that any player diagnosed with ataxia would not be allowed to re-enter the game. That left many wondering: What is ataxia?

“Ataxia is defined as an impairment in any coordination of voluntary muscle movement,” said Daniel Rafie, MD, a neurologist with the UCLA Steve Tisch BrainSPORT Program. “It often is associated with people who are unable to control their balance.”

On Sept. 18, just before halftime in a game between the Dolphins and the Baltimore Ravens, Dolphins quarterback Tua Tagovailoa was knocked to the ground by a Ravens defender. He got to his feet and then dizzily stumbled back to the ground as teammates rushed to his aid.

What people assumed was a concussion, which can cause ataxia, was later reported as a back injury. Tagovailoa returned in the second half and finished the game. But later that week, in a game against the Cincinnati Bengals, he was again slammed to the turf by another defender and immediately showed signs of neurological distress in his extremities.

Tagovailoa was taken to a nearby hospital, where he was diagnosed with a concussion. The sports world went into a frenzy as people wondered if he had been misdiagnosed in the earlier game.

Ataxia can result from a traumatic brain injury (TBI) such as a concussion. It can also be a result of progressive diseases, such as multiple sclerosis, that are unrelated to TBI.

Symptoms of ataxia are a sign of neurological distress. These include:

“Poor balance is the most pronounced symptom of ataxia,” Dr. Rafie said. “From what we saw with Tua in that first game, it was very clear he was suffering from ataxia. He wasn’t able to control the muscles that help him keep his balance."

Dr. Rafie said people with ataxia often have trouble pronouncing words, as well as with fine-motor skills. Tying shoes or holding a pen would be challenging for a person with ataxia.

Other causes of ataxia

Ataxia is a common symptom of a concussion. However, there can be other unrelated causes.

People who drink alcohol excessively can develop persistent ataxia, said Dr. Rafie. In addition, certain medications, such as chemotherapy, barbiturates and some sedatives, can cause ataxia-like symptoms.

Some patients who were diagnosed with severe cases of COVID-19 developed ataxia, as well. The neurological disorder is also linked to autoimmune diseases such as celiac disease and to viral infections such as HIV and Lyme disease.

There are multiple forms of ataxia, including some that are hereditary, and there is no cure other than time. Supportive treatments help manage the symptoms.

Some treatments may include speech therapy to address language difficulties, or physical or occupational therapy to improve motor function.

For those who experience minor symptoms of ataxia following a TBI, rest and time are, in most cases, the best remedies, said Dr. Rafie.

“Ataxia attained by concussions can hardly be treated, but the symptoms do resolve on their own,” he said. “In some cases, those symptoms may not resolve fully, and right now we don’t have any real treatments to ameliorate ataxia after a concussion.”