What's it like to donate a kidney? A sister shares her story

‘I knew that if it was me, if I was a match, I was going to do it,’ says Yadira Ortega 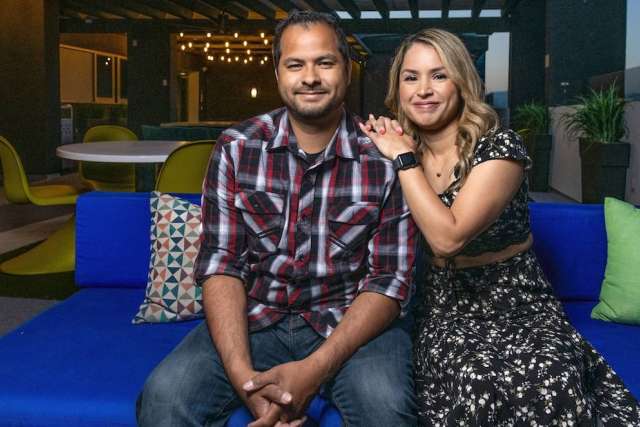 As told to Sandy Cohen

In December of 2020, Yadira Ortega, now 37, learned that she was a perfect match to donate a kidney to her brother, Ricardo, 32, who had severe kidney disease. Here, she shares her experience of becoming an organ donor and participating in UCLA Health’s transplant tolerance program. Launched in 2021, the multidisciplinary approach combines organ-transplant surgery with radiation and stem cell infusion to eliminate the normally requisite need for a lifelong regimen of anti-rejection drugs. 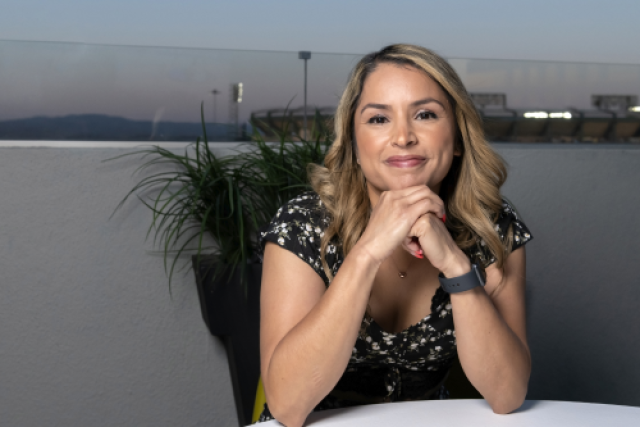 Yadira Ortega was a 100% match with to donate a kidney to her brother Ricardo. (Photo by Joshua Sudock/UCLA Health)

By the time my brother found out he had kidney disease, his kidney function was at something like 7%. It was scary for him and I think it was scary for all of us in the family. It took him a while to come to terms with the fact that he needed to do dialysis, because he couldn’t be put on the transplant list without it.

There’s seven of us kids, so we were all going to see if we were a match to donate. I have three sisters and three brothers. Since my sisters and I are oldest, we tested first.

Once the testing came through, we found out that I was a 100% match — 12 out of 12 of the components they checked. My other sister was nine out of 12 and the other was seven out of 12. So I was the best candidate.

It was a happy moment but an eye-opening moment, because, oh my God, it’s me. I’ve never had surgery before.

Once we found out, that’s when all the intensive testing started. They wanted to make sure everything was good with me. They did a CAT scan to examine blood vessels around the kidneys. They did X-rays to measure my kidneys. There were a lot of appointments and a lot of blood draws.

Because it was still COVID, we did a Zoom orientation with other potential donors where the doctors told us what to expect.

Then I got a call from Rhonda (Hutley), the coordinator. She was just so awesome. You can tell she does this work for the love of it. She called me and told me that everything looked good to proceed. I remember I couldn’t speak for like 10 seconds. She was like, “Are you OK? Can you hear me?”

I just got so emotional. It was so scary for us. My brother was just in such a bad situation. He never complained or said anything, but you could tell it was draining on him. He looked physically ill. And his wife would tell me that when he'd get home from dialysis, he’d just sleep for hours. He has three boys. And the thought of my nephews — they can’t grow up without their dad. 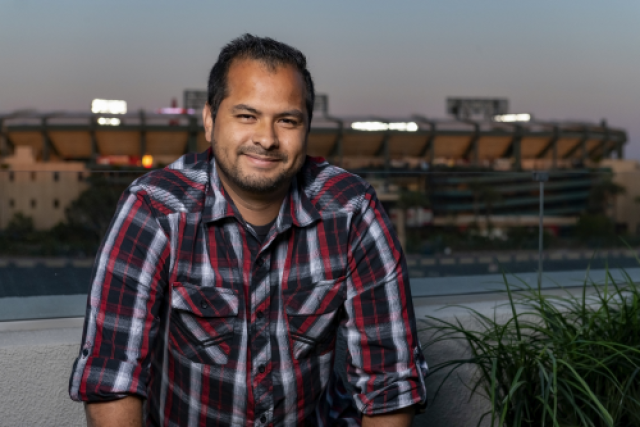 Ricardo Ortega received a kidney from his sister Yadira. The father of three is doing well since the transplant. (Photo by Joshua Sudock/UCLA Health)

So when she told me, “You’re a match. It’s happening,” I got emotional because I got scared but also because he gets a match. We were afraid none of us were going to be a match and he’d be put on this list that could possibly take 10, 12 years before he gets a kidney. So it was a mix of emotions — being afraid, being happy. Rhonda was with me every step of the way. She’s such a beautiful soul.

As soon as I got off the phone with her, I called my brother. Now I see all these stories of how people reveal to their recipient in some creative way that they’re going to be their donor. But I just called him right away and said, “Listen. I got called and it’s all clear and we’re good to go.” I just needed him to know this was going to happen.

More than a kidney

I remember getting another call from Rhonda and she told me that my brother and I were good candidates for this stem-cell research UCLA was running with transplant patients. I felt like if my brother wanted to do it, I was ready to do it. I’m already giving him a kidney, so an extra whatever-it-is doesn’t matter to me. I didn’t know what it would entail.

My brother was interested, but it was scary to me. Research means it’s not proven. So we met with Dr. (Erik) Lum and Dr. (Jeffrey) Veale so they could explain everything step by step.

They said, “We remove your stem cells, then you donate your kidney. Your brother gets a kidney, he has radiation and then we give him your stem cells. The goal is that we trick his body into thinking that your kidney is in your body, because he’ll have some of your stem cells. And then eventually he’s not going to require (anti-rejection) medication.”

I had already made peace with the fact that I was not going to have my kidney, so anything extra was probably not that big of a deal.

You have to give yourself injections to draw out the stem cells. I asked my little sister to do it for me because I don’t do needles.

After five days of shots in my lower belly, I went in to give the stem cells. I was hooked up to a machine with one line going in (my arm) and one going out and I just sat there for five hours, not moving. I had to do it two days in a row so they could get enough stem cells.

The surgery was 10 days later. My biggest fear was the anesthesia — what if I wake up during the surgery?

We had to check in really early on the day of the surgery, like 4 a.m. When I got there, my brother was already there, and he was supposed to check in after me. My mom was there to make sure we were cool. And my brother’s wife was there with him. You could tell they were scared. My friend was with me and she was keeping me calm. I was really surprised that I didn’t feel nervous. 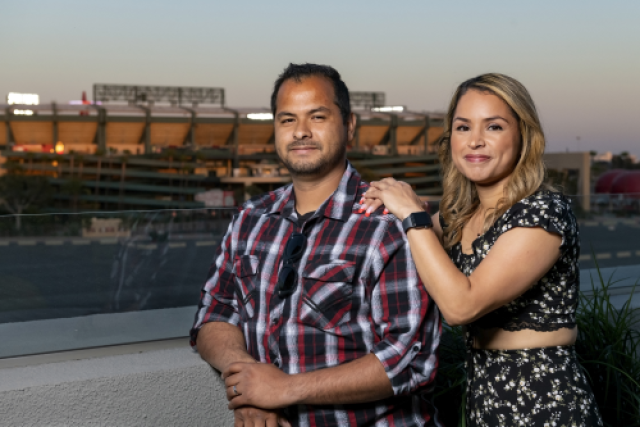 When she found out she was a transplant match for her brother Ricardo, Yadira Ortega says, "It was a happy moment but an eye-opening moment, because, oh my God, it’s me. I’ve never had surgery before." (Photo by Joshua Sudock/UCLA Health)

Everything was OK until the anesthesiologist showed up and gave me some paperwork to sign. That’s when I started to feel really nervous and really shaky. My whole body was shaking. I was like, “I can’t do this. I love my brother, but I can’t do it.”

The anesthesiologist said, “You’re going to be fine.” They told me they were going to give me something to make me feel calm.

As they were wheeling me out, I remember looking up and seeing my brother. I saw his face and he was looking right at me. My voice was so shaky but I tried to play it off, like, “I’ll see you later, right?”

I remember getting wheeled out and I guess in the O.R., but within seconds, I was out.

Then I opened my eyes and I was like, “Where am I?” And the surgery was already done. I was just in and out of sleep that whole day.

They told me they were going to discharge me the next day if everything was fine. I asked if I could see my brother before I left. So they brought me to his room in a wheelchair. And when I saw my brother, it was like night and day. Like he looked physically healthy. It was so weird. He just looked so good, I was like, “This is great. It’s working.”

When I got home, my friend stayed with me for about a week to help me. For the first month and a half, I would get dizzy when I stood up. And I was really swollen. It looked like I was pregnant. My energy levels were really low. Before surgery, I was working out and running six days a week.

After the second week, I started walking one or two miles a day. At week six, the doctor told me I could resume all activities without restriction. I had to build my endurance again. Now I’m back to running six days a week and working out every day. 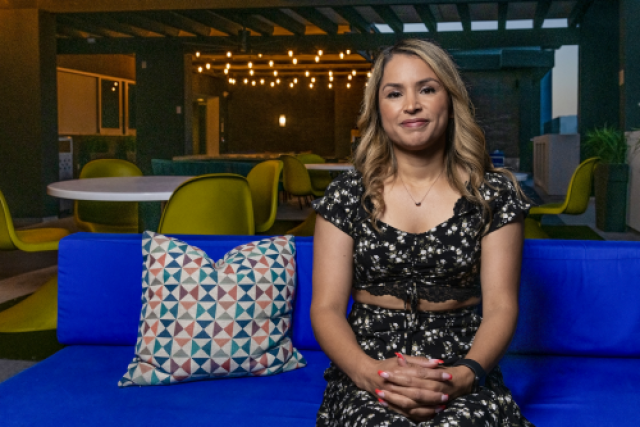 Yadira Ortega is back to her fitness routine after recovering from donating a kidney to her brother Ricardo. (Photo by Joshua Sudock/UCLA Health)

My brother is doing great. He goes to the gym. He’s coaching my nephew’s soccer team. And as of April, he’s off of all medications.

Our anniversary of the surgery was April 26 and my brother arranged a dinner for the whole family. He said he was doing it to thank me, but I just think about his journey. What I did was nothing compared to what he had to go through. I think he’s the one who deserves all the credit.

Learn more about how to become a kidney donor at UCLA.