When psychiatric medications are abruptly discontinued, withdrawal symptoms may be mistaken for relapse 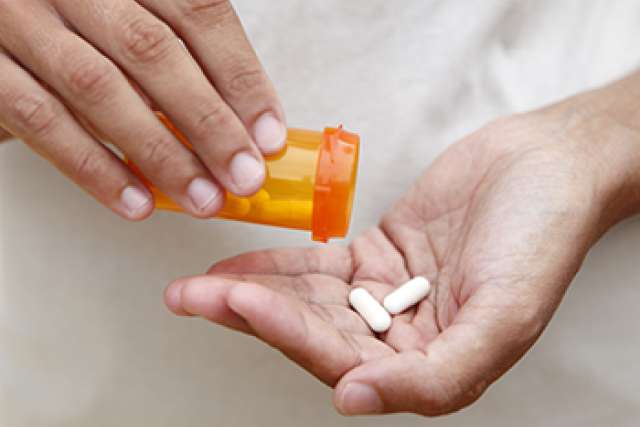 Withdrawal symptoms following the practice of discontinuation, or abruptly "coming off," of psychiatric drugs in randomized clinical trials may be mistaken for relapse and bolster the case for continued use of medication, according to two new studies by UCLA researchers published in the journal Psychotherapy and Psychosomatics.

"For years, observers have asked whether people getting more symptoms when they came off their medication was their disorder returning or the withdrawal effects from drugs that could be reduced by more gradual, patient-centered discontinuation," Cohen said.

In light of the difficulties that people have in discontinuing psychiatric medications, Cohen sought to answer that question, joined by co-author Alexander Récalt, a doctoral student in social welfare at UCLA Luskin who is also pursuing a master's degree at the UCLA Fielding School of Public Health.

They looked at how and why antidepressants, antipsychotics and stimulants were deliberately discontinued from trial subjects in more than 80 randomized controlled trials from 2000–2017. The study also included benzodiazepines, a class of drugs such as Valium, upon which long-term users may become dependent and experience withdrawal symptoms.

In the first study, the researchers found:

The pharmaceutical industry was involved in 70 percent of the 80 studies; in most of the relapse-prevention studies; but in few of the benzodiazepines studies with longer tapering periods, according to the researchers.

Cohen, who also serves as associate dean for research and faculty development at UCLA Luskin, observed across the 80 studies that, in addition to testing relapse prevention, drug discontinuation was employed to chart withdrawal effects and to compare different methods of managing older and frail residents in institutions, given the known damaging effects of drugs taken over the long term.

But only a single study out of the 80 actually employed the discontinuation procedure in order to distinguish clearly between "relapse" and "withdrawal symptoms," the researchers noted.

"This suggests to us that sponsors or researchers of discontinuation studies are really uninterested in exploring this crucial question," Cohen said.

"Distinguishing between them requires careful history taking, an open mindset from the clinician and a degree of suspicion that the discontinuation process itself may be contributing."

In many first-person accounts, patients have complained that they were not warned about these effects or told how slowly they should come off, Cohen said. Instead, their prescriber told them that the effects confirmed that the patients were better off taking the medication and therefore should continue to take it.

"The disconnect continues to drive a wedge between patients and their prescribers and is increasingly discussed in the media, as about one in six adult Americans take — increasingly for years — psychiatric drugs," Cohen said.

"Our findings, if confirmed by other researchers looking at this literature, contribute to helping decide whether industry-funded drug trials in psychiatry are — as critics have maintained for years — infomercials for drugs or credible scientific investigations," he said.

In their second study, Cohen and Récalt focused on whether they could detect evidence in the relapse-prevention randomized control trials that an actual misclassification — a confound — of relapse with withdrawal was occurring.

"Most publications do not raise the issue openly, so they do not provide the data to examine this issue directly," said Cohen, explaining that an indirect method to test their hunch was used. Because withdrawal symptoms are known to begin to occur within an interval of time after drug discontinuation, the researchers focused on the timing of symptoms for drug-continued vs. drug-discontinued participants. They looked for evidence that end-of-study symptoms might already have been present during the study at set discontinuation times. A 50 percent rate of occurrence was chosen to indicate a substantial, non-trivial possible misclassification, Cohen said.

Few studies provided the data to actually test the hypothesis, even indirectly. Among the 14 studies that did provide the necessary data, about three-quarters showed evidence that withdrawal may be mistaken for relapse.

In line with a stream of previous warnings in the literature, the two studies show that more justifications are needed for why and how these discontinuation trials are conducted. Clinicians and consumers should not accept conventional interpretations of what is actually occurring to deliberately drug-discontinued participants in the trials, Cohen said, "and what this could mean for long-term use of psychiatric medications by ordinary people around the world."