While modern life may exacerbate depression, it may also give us the tools to treat it 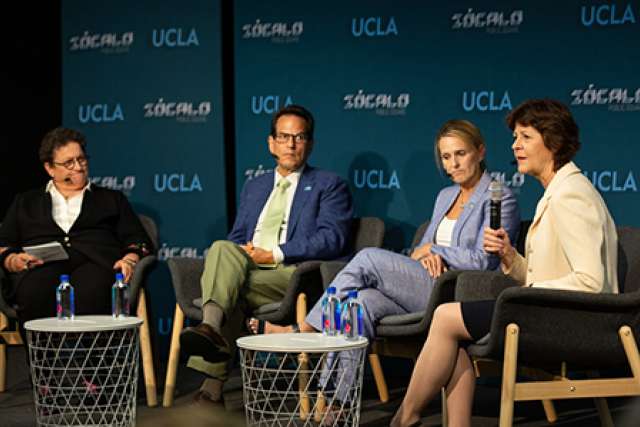 Worldwide, rates of depression increased by 15 percent between 2005 and 2015, according to the World Health Organization. Almost everyone has been touched by depression, if not their own then that of a friend or family member. As depression becomes our new normal, the question of how to diagnose, prevent, and treat it becomes ever more urgent, said a panel of experts at a Zócalo/UCLA event titled "Is Depression a 21st-Century Epidemic?"

Before a full audience at the House of Sweden in Washington, D.C., the event began with a question from moderator Amy Ellis Nutt, former science writer for the Washington Post, that underscored the complexity of the task of treating the disease: "How can we truly assess the rate of depression in the U.S. or the world without an adequate definition of what depression is?"

The panel featured two researchers who are working on the UCLA Depression Grand Challenge, which aims to reduce the health and economic impacts of depression by half by the year 2050. Psychiatrist Dr. Nelson Freimer, director of the UCLA Center for Neurobehavioral Genetics, and Michelle Craske, director of the UCLA Anxiety and Depression Research Center were joined on the panel by Shelli Avenevoli, deputy director for the National Institute of Mental Health.

Depression, which spans emotions ranging from sadness, to the inability to work, to thoughts of suicide, may not be one disease, said Freimer. "We really have to start thinking of depression as a group of illnesses which have many features in common," he said. But Freimer cautioned this fact should not deter us from determining what forms depression takes are so we can understand and treat them.

Craske explained that increasing access to mental health care, while important, would not be enough to address the problem of depression. "When you think of the rates of depression and anxiety and related conditions, and especially among youth, it's almost impossible to think we'll ever have enough clinicians to do the job," she said.