With $8.6 million grant from NIH, UCLA-led consortium will map the heart’s nervous system

Seven-university initiative could lead to new treatments for cardiovascular diseases 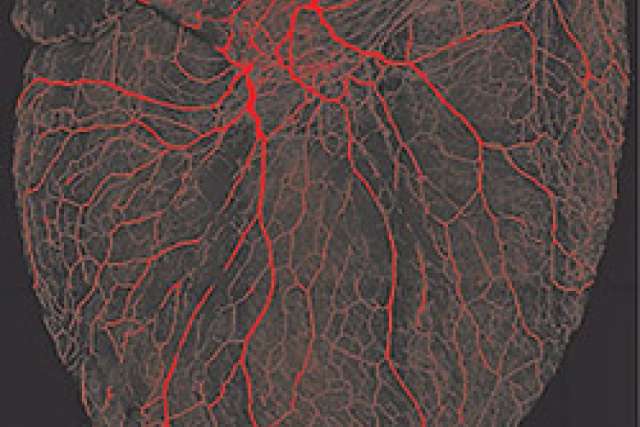 Scientists at UCLA and Caltech generated this image of the nerves in a mouse’s heart.
December 22, 2016
Estimated read time: 3 minutes

More than 800,000 people in the U.S. die each year from cardiovascular diseases such as heart failure, arrhythmia and hypertension. These problems often are linked to the autonomic nervous system, the part of the nervous system that signals the heart to beat and controls breathing, digestion and other body processes that typically happen without conscious effort.

Researchers believe that modulating those electrical signals holds promise as a way to treat heart failure and other common cardiovascular problems.

“Understanding the nervous system’s control of the heart is such a complex problem that it requires a collaborative approach, and we’re pleased that so many experts are coming together for this initiative,” said Shivkumar, the study’s lead investigator and director of the UCLA Cardiac Arrhythmia Center and Electrophysiology Programs. “Our goal is to precisely map the heart’s anatomy and code the function of the nerves that control the heart from a very basic level all the way to clinical studies in humans.”

UCLA is one of seven institutions participating in the project. Principal investigators at the other universities are Dr. Viviana Gradinaru of Caltech, Dr. Stephen Liberles of Harvard University, Dr. Charless Fowlkes of UC Irvine, Dr. Irving Zucker of the University of Nebraska Medical Center, Dr. Beth Habecker of Oregon Health and Science University and Dr. David Paterson of Oxford University.

The information the consortium produces could point the way to new therapies that target neural structures, and it could suggest ways for scientists to create more effective electrical stimulation therapies based on the methods being used today, said Shivkumar, who is also chief of the UCLA Cardiovascular Interventional programs and a professor of medicine, radiology and bioengineering at the David Geffen School of Medicine at UCLA.

“Understanding how the nervous system controls the heart offers researchers a tremendous opportunity to open up new paths to treat cardiac disease,” said Dr. Kelsey Martin, dean of the David Geffen School of Medicine. “We are thrilled that our UCLA team is leading the charge on this exciting new research.”

The award is from an NIH program called Stimulating Peripheral Activity to Relieve Conditions, or SPARC, which supports research on how the electrical signals of the peripheral nerves that connect the brain and spinal cord to the rest of the body control internal organ function. The UCLA-led consortium is one of 27 multidisciplinary research teams that received SPARC awards in 2016; the grants totaled more than $20 million.