‘You are our angels’

Family thanks eight strangers who saved their young son’s life 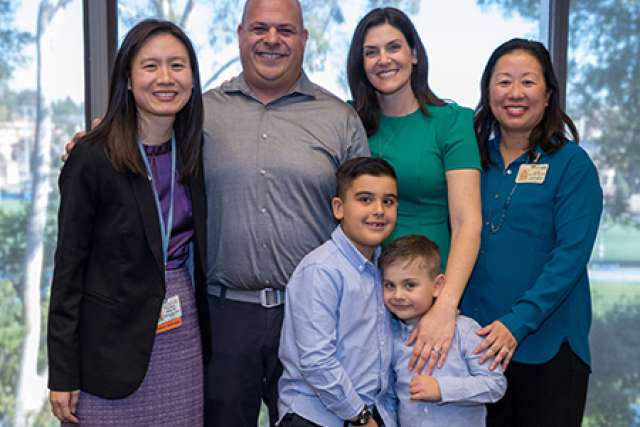 Her words hung in the hushed air.

"Thank you for saving our boy," the mother said, her voice choked by emotion.

Devra Schwartz, and her husband, Jeff, recently had a chance to express their gratitude to eight of the 100 strangers whose blood donations provided a lifeline for their son, Judah, now 4. The Santa Monica youngster nearly died last year when his kidneys failed due to foodborne E. coli infection.

Toxins in the E. coli bacteria ruptured Judah's red blood cells, leading to massive blood loss. His platelets — critical to clotting and preventing hemorrhage — plummeted to 13,000. A healthy person's platelet count is 250,000 to 450,000.

"At Judah's first transfusion, we were terrified and hopeful," recalled Jeff Schwartz, during a Jan. 10 event organized by the UCLA Blood & Platelet Center to recognize its top blood donors. "We sat by his bed and prayed that platelets would be the answer to his recovery."

When his kidneys shut down, Judah required 24-hour dialysis to clean his blood. Seizures and small strokes wreaked havoc in his brain. To lessen stress on his body and support his breathing, UCLA doctors placed Judah on a ventilator and induced a medical coma.

"We were not confident that Judah's story would have a positive resolution," Dr. Patricia Weng, his pediatric nephrologist and an assistant professor of pediatrics, told the audience. "Without you, his recovery would not have been the same."

UCLA collaborated with Loyola Marymount University, where Devra and Jeff work in campus security and instructional technology, respectively, to quickly organize a blood drive on the LMU campus. Thanks to a huge outpouring of community support, within 30 days the organizers collected all of the O-positive blood, platelets and plasma that Judah needed to survive.

"You feel like someone's hero without even intending to," said Naomi Mimila, one of Judah's blood donors, told KNBC-TV. "It's so rewarding, especially when you get news like this."

Fellow donor Dr. Anthony Bejjani, a hematology/oncology fellow at the David Geffen School of Medicine at UCLA, agreed. "I just assume that my blood will go to someone who really needs it. But it's nice to actually put a face to it."

UCLA is sharing Judah's story as the nation struggles with a severe blood shortage. The blood center's stock of type-O blood — which can be transfused into anyone, regardless of blood type — has dropped to half its normal inventory.

"We hope that people can be inspired by Judah's story and donate," said Devra, her eyes brimming with tears. "You are our angels. From the bottom of our hearts and souls, thank you."

To donate blood or platelets, a person must be 17 or older, weigh at least 110 pounds, be in good health, not take aspirin or anti-inflammatory drugs within 48 hours of donation, and be willing to allow one hour for donating blood or two hours for donating platelets. To schedule a donation, contact [email protected] or 310-825-0888, ext. 2.