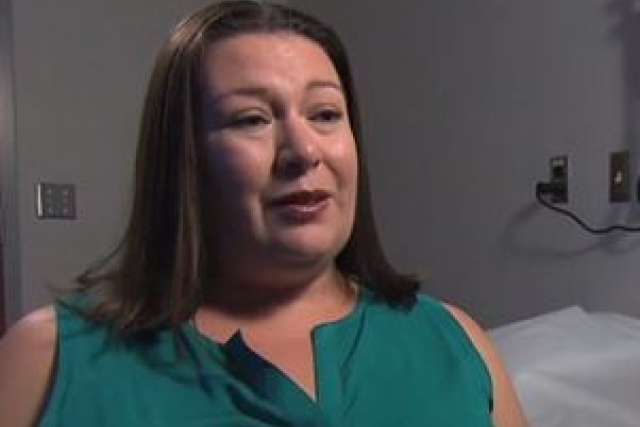 Because she was so young, Reilly assumed it was nothing. She was wrong.

She was having a stroke.

The numbness recurred off and on for several days. Then one night she had a piercing headache, an uncommon event for her. She mentioned her symptoms to a work colleague, who urged her to see a doctor.

Reilly saw several doctors and finally landed at UCLA in the neurology department, where she saw Dr. David Liebeskind, professor of neurology and director of outpatient stroke and neurovascular programs. After a battery of tests, Reilly was diagnosed with Moyamoya disease — a rare, progressive cerebrovascular disorder caused by blocked arteries at the base of the brain, which cuts off blood flow. One of the first symptoms of Moyamoya is recurrent transient ischemic attacks, or TIAs, commonly referred to as “mini-strokes,” which are exactly what Reilly was experiencing.

She had no idea the danger she was in, said Liebeskind, who is also director of the neurovascular imaging research core at UCLA.

“The worst and a very likely possibility is that she would have had a significant stroke,” he said, one that could have been extremely debilitating or even fatal.

Reilly was referred to Dr. Neil Martin, chair of neurosurgery at Ronald Reagan UCLA Medical Center and head of the neurovascular surgery section.

“He told me I needed to be admitted into the hospital immediately, and that I would be in surgery within 24 hours,” she said. “It was such a shock. I can’t fathom what my parents must have been going through. We had a few tears, and they stayed very strong for me.”

Dr. Nestor Gonzalez, an associate professor of neurosurgery and radiology, performed two nine-hour brain surgeries on Reilly to reroute arteries that normally bring blood to the scalp to instead supply blood to her brain. Over time, the arteries formed new branches and restored blood supply to the brain.

Gonzalez highlighted the importance of Reilly acting quickly after her symptoms began.

“The good thing is that she sought attention when she started having those symptoms and we were able to diagnose her condition very early,” he said. “We were able to avert a stroke that could have devastated her life.”

“A stroke is not a disease limited to elder individuals,” he said. “It is a condition that can affect younger individuals, even kids. The moment someone feels any of the symptoms of a stroke, they need to seek immediate emergency attention.”

It’s been nearly six years since her mini strokes and surgeries and today Reilly is embracing life. She got married and will celebrate her third wedding anniversary next June.

“Since my recovery I have an absolutely newfound perspective on life,” she said. “I really try to stop and appreciate that I was given a second chance.”