Your body to spec 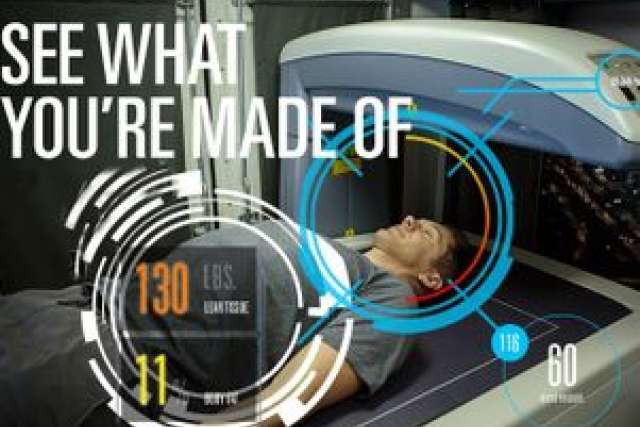 Would you want to know how much of your body is bone and lean muscle tissue? Do you really want to find out how much fat tissue you carry around all day?

From competitive athletes and CrossFit enthusiasts to those who simply want to improve their health, finding out exactly what one is made of is becoming another arrow in one’s fitness quiver.

UCLA Anderson School of Management alumnus Bryce Luken’s first experience with dual-energy X-ray absorptiometry (DXA) technology came while he was a cadet at the U.S. Air Force Academy in Colorado Springs. These scanners measure bone density, typically in hospitals to diagnose bone maladies such as osteoporosis. The scans also provide a comprehensive analysis of body composition, identifying the amount and location of fat and lean tissue.

As a player on the academy’s football team, Luken underwent DXA scans as part of his training regimen. The team’s medical staff used DXA to monitor the effectiveness of his workouts and to achieve specific fitness goals. But when Luken enrolled at UCLA Anderson, he found that getting a scan as a civilian would be expensive and inconvenient.

Luken then experienced a pair of epiphanies. First, he realized the same DXA scans used by his academy trainers could be used by gym trainers and other fitness buffs in Los Angeles, where getting and staying in shape are ubiquitous to the culture. Second, he believed bringing the technology to the masses was a great business idea. If easy access to DXA technology was the problem, his company, BodySpec, would be the solution.


As an Anderson first-year student, Luken investigated ways to make DXA technology more readily available. He accessed DXA equipment on the UCLA campus and performed tests and demonstrations with athletes and the CrossFit crowd.

While Luken came to Anderson looking to start a business, his classmate Elaine Shi wanted to change things up in her career. “I was looking for something challenging,” she says. “I was working at a nonprofit, and after being here I thought it would be most fulfilling to build something up from scratch.”

As first-year Anderson students, Luken and Shi were taking core courses together and got to know each other. But it wasn’t until spring quarter in “Entrepreneurship and Venture Initiation” that their partnership formed. “In that class, if you have an idea, you have to pitch it,” Luken says. So he pitched his idea for DXA body scanning.

“I honestly don’t remember his pitch,” Shi says. “I do remember from our accounting class that I was really impressed with his prep work. I personally had no interest in athletics, but I felt comfortable partnering with him.”

Their relationship turned out to be an ideal business marriage. “Bryce is very big picture. He had the vision, has pure grit, and he never stops working and trying to get everything to work,” Shi says.

Luken says the business needed to focus on process in order to make it scalable, and Shi was great at seeing those avenues and solidifying processes to grow the business. “Elaine was the glue that kept the team together. I was going from gym to gym developing relationships,” says Luken.

Jeff Scheinrock is president and chief financial officer of Originate, a digital-product development and venture firm. He also teaches a variety of entrepreneurial courses at Anderson as a lecturer, heads up the Business Creation Option component of the Applied Management Research (AMR) Program and serves as an advisor to both AMR and Global Access Programteams.

“I pushed them hard on the financial model, to come up with what the business actually is, and then building a financial model that would guide them toward what they needed to do to make good on their investment,” Scheinrock said.

“Everybody loves marketing and sales, but hates doing the financial modeling,” he said. But with a financial model in place, the BodySpec team was able to figure out what to charge to break even and control overhead, and how much debt they could take on. “I advised them not to consider the brick-and-mortar, and they listened,” he said. So they started with a truck to prove the concept.

It’s important to note that Scheinrock served as a trusted advisor, not a boss giving orders. “They did a lot of good research,” he says. “They looked at their competitors. They researched the legal issues and mitigated the risks before they started. They researched the right way to do it; they were ready.” And while they didn’t agree with everything Scheinrock advised, they asked for his opinion as well as a ton of questions. "They used me as an advisor the right way,” he says. “I’m really proud of them.”

Since graduating from Anderson in 2014, Luken has returned to the Air Force Academy where he’s committed to teach through 2017 in exchange for b-school. And Shi has moved to Texas since she earned her Anderson M.B.A in 2014. But neither wanted to wait to launch the business.

“We were originally just doing CrossFit gyms in West L.A. and Orange County,” says Luken. “Now we’re doing testing in San Francisco and Sacramento. We’re also doing scans at Google, Facebook and LinkedIn — getting into the corporate space through Anderson connections and classmates.”

A change in their pricing model has also proven to be effective. “We cut prices — a scan now costs $45 — and further discounts are available depending on how many are purchased at once,” she says. “It’s probably the lowest price in the nation now. Originally, we thought our customers would be CrossFitters with high incomes. Now we’re operating on high volume.”

With the business model proven — January 2015 was their biggest month to date with more than 1,000 scans performed — the company opened a brick-and-mortar BodySpec location in West Los Angeles in the spring.

Luken says the scanner removes all doubt regarding the effectiveness of your exercise and diet program. “When you work 45 hours a week and have almost no time to work out, that feedback is important,” he says. “And it’s even more so for those who are dialed in. The value comes not from the first scan, but from the progress you see in multiple scans over time.”

This story is in the summer 2015 issue of Assets Digital, an online magazine of the UCLA Anderson School of Management.