Approach could help people who might not otherwise receive a transplant 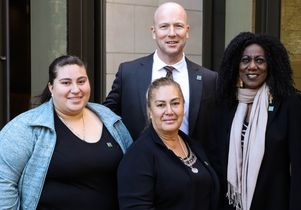 Dr. Jeffrey Veale with (from left) Linda and Eva Maldonado and Vertis Boyce, the recipient of a re-donated kidney.

Sometimes, the gift of life can be “re-gifted.”

That is, a kidney previously donated to one person can be re-donated to a new patient after the initial recipient dies, saving yet another life. Procedures in which people receive previously transplanted kidneys are virtually unheard of, but the surgery could save the lives of hundreds of people in the U.S. each year — people who might otherwise die while waiting for a traditional kidney transplant.

One beneficiary of the surgery is 70-year-old Vertis Boyce, a Las Vegas resident who was freed from the limitations of dialysis in July 2017, when she received a re-gifted kidney from the family of Beto Maldonado.

After suffering from kidney disease for most of his life, Maldonado received a kidney transplant in 2015. But he died in an auto accident two years later. Rather than discard the still-usable kidney, his family agreed to donate the organ.

For Boyce, the power of the “gift of life” was no less meaningful because it was a re-gift.

On March 5, when she met Maldonado’s mother, Eva, and sister, Linda, the trio barely spoke. Instead, they exchanged hugs. Eva reached out and held her hand over Boyce’s abdomen and let it linger there, tears flowing from her eyes.

Veale sums up the re-gift this way: One kidney helped three people live.

“In the United States about 25 percent of those who receive a donated kidney die while their kidney transplant is still functional,” said Veale, director of the UCLA Kidney Exchange Program. “Re-gifting that viable organ to another patient on the waiting list gives new hope to patients who otherwise may not be considered for a transplant.”

With a re-gifted kidney, people who had been reliant on dialysis for years could live normal lives, spending time with their loved ones, traveling or doing anything else that people who aren’t on dialysis may take for granted.

Each year in the U.S., less than 20 percent of patients on the United Network for Organ Sharing kidney transplant waiting list will receive a transplant, and 13 people on that list die each day. If transplanting kidneys a second time were standard practice, it would open up a currently unutilized pool of donors. 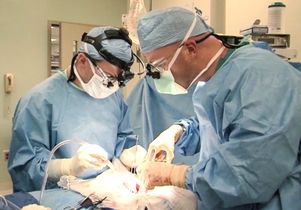 Dr. Jeffrey Veale (right) and colleague in the operating room

Linda Maldonado said it had never occurred to the family to donate her brother’s kidney to someone else until a health care provider asked her about it. She thought about the fact that Beto had more time with his family than he would have otherwise, thanks to the gift of a kidney from a teenager the Maldonados had never met.

“We just thought, ‘They gave him that gift, why … not give that gift to somebody? Why not help another family if we can?’” Linda said.

Boyce is overwhelmed and grateful. In fact, thanks to the “re-gifted” kidney transplant she recently flew to her nephew’s wedding, where she saw family members she hadn’t seen for nearly a decade because of her need for regular dialysis.

“It’s just like a blessing,” Boyce said. “That's the best way I can explain it. I feel freer, and I know I’m on the road to a more fulfilled life. I have a 6-year-old grandbaby that I thought I wouldn’t live to see grow up. I think I will be there now.”