Dr. Lawrence graduated from Dartmouth College and was awarded his M.D. degree with honors from Harvard Medical School. His surgical residency and vascular fellowship were done at Columbia-Presbyterian Medical Center in New York City. In 1978, he joined the faculty at the University of Utah, where he served as chief of surgery at the Veterans Administration Hospital, chair of the Division of Vascular Surgery and president of the medical staff.  He moved to UC Irvine in 1998 to become the associate dean for clinical affairs, vice president for specialty services, and professor of surgery. In 2003, he moved to UCLA to become the Chief of vascular surgery and Director of the Gonda (Goldschmied) Vascular Center, as well as the Bergman Chair in vascular research. More >

David A. Rigberg is an Associate Professor of surgery in the Division of Vascular Surgery at the David Geffen School of Medicine at UCLA. He earned his bachelor's degree at the University of Pennsylvania and his medical degree at the University of Arizona in Tucson. He completed his internship and residency in general surgery at UCLA, and a fellowship in vascular surgery at UCLA. This training included open vascular surgery as well as catheter-based endovascular interventions. He has published extensively in the basic and clinical sciences, including work in the field of outcomes from aortic operations. He has also written on a variety of topics, including Takayasu's arteritis and Thoracic Outlet Syndrome. Other research interests include the development of new devices for vascular procedures. He is a full-time faculty member at UCLA, and is also the section chief of vascular surgery at Santa Monica-UCLA Hospital. In addition, he has an appointment at the Veteran's Administration Hospital. More > 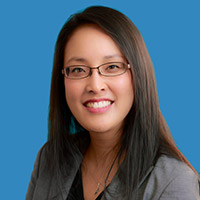 Dr. Woo is an Associate Professor of Surgery at UCLA. She sees patients in the vascular surgery clinic, hyperbaric medicine and the wound care and limb salvage clinic. More >