A new therapy for cystic fibrosis (CF) that targets the genetic root of the disease has been shown to dramatically improve patients’ lung function and could benefit the vast majority of patients with the disease. Data from clinical trials was so persuasive that the Food and Drug Administration approved the new three-drug combination therapy in October 2019, five months earlier than expected.

“This is the closest therapy we have to a cure, and soon we hope to be able to successfully treat all CF patients,” says Douglas Li, MD, codirector of the UCLA Mattel Children’s Hospital Cystic Fibrosis Center, which is accredited as a Core Center by the Cystic Fibrosis Foundation and includes both pediatric and adult programs.

CF is the most common, life-limiting recessive genetic disorder in Caucasians, though it occurs in all ethnicities. It is a progressive disease that results in the buildup of thick mucus in the lungs, causing persistent lung infections and limiting the ability of patients to breathe. While the median survival for patients with CF has, over the decades, increased from 2 years to 47 years of age, there have, until recently, been no treatments that did more than alleviate symptoms.

That is not the case with the new therapy, elexacaftor/ivacaftor/tezacaftor, which is part of a new class of drugs — cystic fibrosis transmembrane conductance regulator (CFTR) modulator therapies — designed to correct the underlying defect that causes CF. While not cures, these drugs have dramatically improved the outlook for those patients who have the specific mutations targeted by the drug therapies. (More than 1,700 mutations in the CFTR gene have been identified, some of them common and others extremely rare.)

Dr. Li notes that the CFTR modulator therapies have a beneficial impact on lung function, as well as decreasing pulmonary exacerbations and weight gains. “Previously, we had made large strides in life expectancy by mitigating the end-organ effects of CF. What’s exciting about these new therapies is that, for the first time, we are able to treat the underlying cause of the disease,” he says. 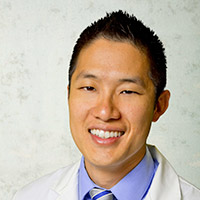 Elxacaftor/ivacaftor/tezacaftor was approved for patients 12 years and older with the most common CF mutation. Marlyn S. Woo, MD, codirector of the UCLA Cystic Fibrosis Center, and Dr. Li note that nearly half of CF patients can benefit from one of the two earlier available CFTR modulator therapies that target the malfunctioning protein encoded by the CF gene, which regulates the flow of water and chloride in and out of cells in the lungs and other organs. This new medication expands the proportion of CF patients eligible for CFTR modulator therapy to approximately 90 percent.

“Before these CFTR modulator therapies, we could only symptomatically treat CF patients with drugs to help them with malabsorption or to thin the thickness of the airway mucus,” Dr. Woo says. “But we couldn’t really go after the source of the disease, which is the dysfunction of the CFTR protein. Now we have directed therapy.”

Care for patients with CF has significantly improved over the years. As recently as the 1980s, the median life expectancy was 14 years of age. That began to change dramatically with newborn screening to detect the disease early, mechanical therapy to loosen thickened mucus and help patients expel it from their lungs, improved antibiotics, nutritional enhancement and digestive enzymes. By 2016, according to CF Registry data, the median predicted survival was 47 years — a jump from 41 the previous year, thanks to the introduction of the firstgeneration CFTR modulator therapies. More than half of the CF patient population is now older than 21. “This is no longer a pediatric disease,” Dr. Woo says.

Coupled with advances in genetic therapies, theratying, a recently developed process to match medications with mutations, will enable more patients with rare mutations to benefit from modulators.

Will there someday be a cure for CF? Dr. Woo believes one will come within the next 10 years. “The CF Foundation is committed to finding effective treatment for all CF patients,” Dr. Woo says. “The motto of the CF community is ‘CF means cure found!’ It may not come about from correcting the protein or getting the protein to function; it may come from some other direction. But I believe that it will come,” she says. “We are very close.

Cystic fibrosis is the most common, life-limiting recessive genetic disorder in Caucasians, though it occurs in all ethnicities. Until recently, therapies aimed only to alleviate the symptoms of the disease.

A new class of drugs that targets the genetic root of the disease is changing the outlook for an increasingly large percentage of patients. Elexacaftor/ivacaftor/ tezacaftor is the latest addition to this armamentaria that, together with previous genetic therapies, is expected to expand treatment to up to 90 percent of eligible patients.