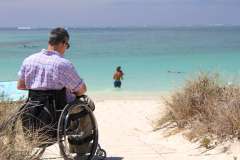 Image by Tony Laws from Pixabay

Melissa Spencer, MD, of the David Geffen School of Medicine at UCLA, along with collaborators at the University of Washington, have been awarded a 5-year, $2.8 million grant from the NIH to develop targeted gene therapy for a rare form of muscular dystrophy.

The disease, called limb girdle muscular dystrophy type 2A (LGMD2A), comes on in adolescence. First, it may become difficult to get up from a chair. The muscles in the hips and upper legs start to weaken, followed by the shoulders. As the disease progresses, walking or raising the arms becomes impossible, and by around age 40, the affected individual will be wheelchair-bound, requiring assistance with feeding and other tasks. “If you look at an MRI, their hamstrings are gone,” Dr. Spencer said.

Muscular dystrophy is inherited, and the particular version Spencer is studying arises from defects in a gene that makes a protein called calpain 3. Calpain 3 plays an important role in healthy muscle development, but much remains unknown about the protein’s exact function.

“It’s not a well understood disease,” said Spencer. “There’s no treatment, and none of the therapies that have been attempted have worked.” 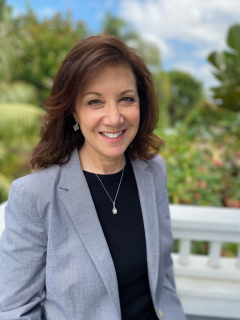 Calpain 3 appears to help coordinate the muscles’ ability to respond to exercise. “When you don’t have calpain 3, the muscles fail to know they’re being worked,” explained Spencer. “It’s like being in zero gravity all the time.”

Gene therapy allows researchers to put a functioning copy of the gene back into the cells. But there’s a catch. While calpain 3 is necessary for skeletal muscle, such as in the arms and legs, it can be toxic to heart muscle. Spencer’s project, therefore, will focus on designing a delivery system that sends the gene where its needed, while keeping it out of the heart.

In gene therapy, viruses carry a healthy copy of the gene into the body. The virus can’t make the patient sick, but delivers the needed gene into the sick person’s cells. The cell “reads” the DNA and translates the genetic instructions into protein.

Our bodies comprise a stunning variety of different cell types, and all of those cells contain the same full set of genes. What differentiates muscle from brain from bone is their ability to turn on different genes. Every gene is associated with a short sequence of DNA called a promoter, usually near the beginning of the gene, that tells the cell to activate the gene. A cell will only turn on genes that have the correct promoter for that cell type. 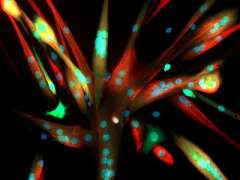 "Muscle Cells Grown in Culture" by National Institutes of Health (NIH) is licensed under CC BY-NC 2.0

Spencer and her collaborators will test many different promoters to find one that will tell skeletal muscle cells to turn on the gene but not heart cells. With the right promoter sequence, “even if the virus gets to the heart, the gene won’t be active,” Spencer said.

The gene therapy candidates will consist of a string of DNA containing the gene for calpain 3 attached to a promoter. These candidates will be carried by viruses into mice that lack calpain 3, and the researchers will then examine the animals’ individual muscle fibers using specialized microscopy techniques. If the gene therapy restores calpain 3 to the animal muscles, the next step will be to test the therapy in human cells grafted into mice.