Research Projects in the Lyons Lab

Bone Morphogenetic Proteins (BMPs) in the Growth Plate. We are investigating the roles of BMP signaling pathways in aspects of chondrocyte commitment, survival, proliferation, and differentiation. We use a variety of in vitro, ex vivo, and in vivo approaches. For example, we have generated mice lacking BMP ligands and their receptors. These studies have revealed that there is extensive functional overlap among BMP ligands, but each of the three type I BMP receptors has an essential role. Moreover, BMP signaling is essential for nearly every aspect of chondrogenesis. More recent studies have shown that the majority of BMP signaling proceeds through canonical Smad-mediated signaling pathways. Surprisingly, our studies suggest that these canonical pathways may not require Smad4, a co-Smad generally thought to be essential for canonical pathways. Current studies are aimed at investigating the mechanisms by which canonical Smads exert their functions in the growth plate. BMP Research > 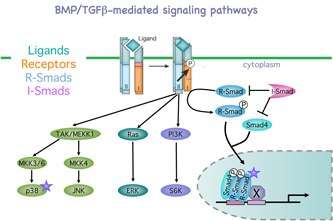 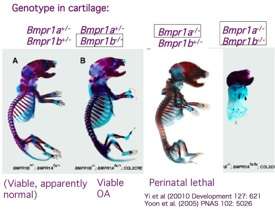 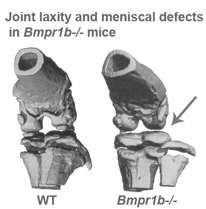 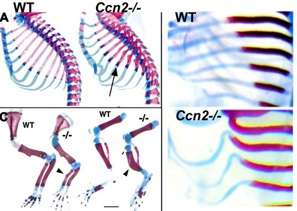 Functions of CCN proteins in skeletal tissues. Matricellular proteins have been defined as residing in the ECM, but having regulatory rather than structural roles. The CCN family of matricellular proteins includes connective tissue growth factor CCN1/Cyr61, CCN2/CTGF, CCN3/NOV, and CCN4/Wisp1. We are defining the functions of these CCN proteins in development and disease. For example, we found that CCN2 is essential for chondrogenesis. Mice lacking CCN2 exhibit profound chondrodysplasia and die immediately after birth. The chondrodysplasia is due in part to defective extracellular matrix production. In addition, expression of integrins that interact with the ECM is defective in Ccn2 mutants. Moreover, CCN2 itself is a ligand for integrins that are essential for cartilage function. We are currently examining other mechanisms of action of CCN2 and related CCN proteins in the growth plate. In addition, we have found that several other members of the CCN family are essential for the formation of cartilage and bone, and are currently investigating the mechanisms of CCN action in these tissues. CCN Research >