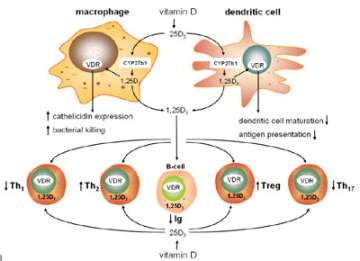 We now know that in addition to its classical effects on the skeleton vitamin D is a potent regulator of other important physiological responses. Prominent amongst these effects is the interaction between vitamin D and the immune system (Figure 4). In collaboration with Dr. Robert Modlin and Dr. Philip Liu at UCLA, we have established a series of studies to explore the antibacterial properties of vitamin D. 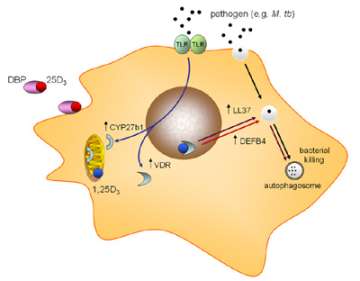 Unlike the skeletal effects of vitamin D, the induction of cathelicidin by vitamin D has been shown to be due to induction of local, monocyte, expression of 1α -hydroxylase (CYP27B1), the vitamin D-activating enzyme. We have also shown that the bioavailability of precursor 25-hydroxyvitamin D (25OHD – the main circulating form of vitamin D) to this enzyme is dependent on the serum carrier of 25OHD, the vitamin D binding protein (DBP). In particular we have shown that genetic variations in DBP differentially affect the antibacterial actions of vitamin D, suggesting that vitamin D supplementation strategies may need to be tailored according to DBP genotype (Figure 6). 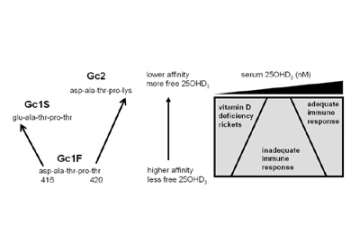 Preterm birth is one of the most significant complications of maternal/fetal health and there is an urgent need for improved understanding of the factors that contribute to this. We have hypothesized that vitamin D is a key factor in the continued prevalence of preterm birth because of three important observations: 1) approximately 50% of total and 80% of early (

Poor vitamin D status during pregnancy may affect a range of physiological responses in utero, with the placenta acting as a major site for vitamin D metabolism and action (Figure 7). 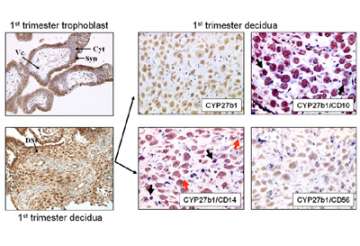 Figure 7. Expression of the vitamin D-activating enzyme CYP27B1 in human placental tissues.
However, we have specifically proposed that an as yet unrecognized function of vitamin D during pregnancy is its ability to act as a modulator of innate and adaptive immunity in the placenta. Studies carried out by our group have characterized the vitamin D system in human and mouse placentas, and we have hypothesized that vitamin D can act to protect against infection-associated preterm birth by activating antimicrobial responses and suppressing inflammation within the fetal-maternal unit. We further hypothesize that vitamin D-insufficiency increases susceptibility to infection and inflammation, leading, in turn, to increased risk of preterm birth (Figure 8). 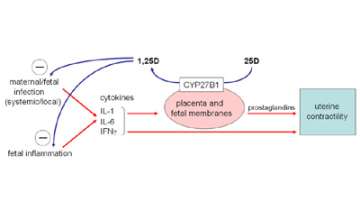 Figure 8. Antimicrobial and anti-inflammatory responses to 1,25D synthesized by placental cells.
Conversion of 25D to 1,25D within the placenta, in proportion to maternal vitamin D status, can act to both suppress infection and any associated inflammation.

To test these hypotheses we have developed novel in vivo imaging mouse models to assess the impact of altered vitamin D status on pregnancy-associated infection and inflammation. The immediate aim of this project is to investigate the effects of vitamin D sufficiency or insufficiency on pregnancy outcome in the setting of infection. The long–term objective of the project will be to establish a rationale for vitamin D supplementation as a novel strategy for the prevention or treatment of infection-associated preterm delivery.

Vitamin D, immune regulation and inflammatory bowel disease.
In recent studies we have shown that knockout of the CYP27B1 gene, or simple vitamin D-deficiency predisposes mice to experimental forms of IBD. We have shown that this is due, in part, to aberant innate immune regulation of enteric bacteria (Figure 9), leading to dysregulation of downstream adaptive (T cell) immune responses (Figure 10). In current studies we have teamed up with Dr. Sarkis Mazmanian at Caltech to further investigate the link between vitamin D and enteric bacteria. Also, in clinical studies we are collaborating with Dr. David Ziring at UCLA to assess the effects of in supplementation with vitamin D on innate immune responses in pediatric Crohn’s disease patients. 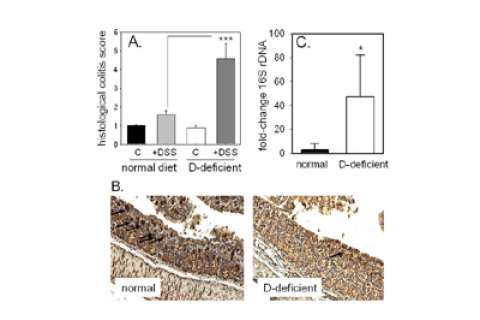 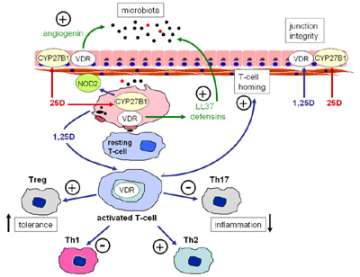 Figure 10. Vitamin D and barrier function in the gastrointestinal tract

Figure 10. Vitamin D and barrier function in the gastrointestinal tract.

Vitamin D, immune regulation and chronic kidney disease.
In previous studies we have shown that impaired synthesis of 1,25(OH)2D by the kidney not only cause problems for mineral homeostasis and skeletal regulation, but it also leads to dysregulation of immune function. This may be a key factor in promoting the macrophage infiltration and inflammatory damage that is characteristic of some forms of CKD. Patients with CKD have low levels of renal CYP27B1 activity but they are also usually vitamin D-insufficient. In view of this it seems likely that CKD will also lead to dysregulation of normal immune responses, particularly in patients receiving peritoneal disalysis who have increased risk of infection. With this in mind current studies carried out in collaboration with Dr. Isidro Salusky at UCLA are aimed at assessing the impact of vitamin D on immune responses using cells isolated from peritoneal fluid. This includes a clinical trial to investigate the possible beneficial effects of vitamin D supplementation in CKD patients.