Similarly, because this specialized form of radiation involves the use of multiple radiation beam angles, expert radiation oncologists specialized in this technique are able to safely deliver high doses of radiation, with very sharp dose gradient outside the tumor and into the surrounding normal tissue (Figure 3). 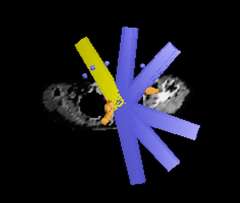 Figure 2. A high potent biological dose of radiation is delivered to the tumor. 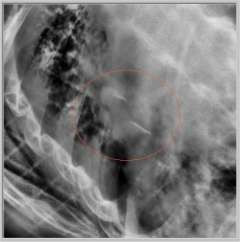 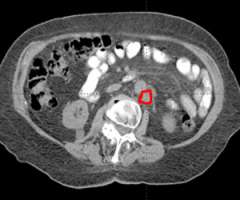 This image shows the recurrent lymph node outlined in red.

This SBRT technique is currently being used in situations where treatment options have previously been limited. It is currently most commonly being used in cases where patients have a limited number of recurrent sites to deliver an ablative dose of radiation.  Examples include limited disease in recurrent lymph nodes, the lungs, the spine, and the liver.

The second row shows images (axial, coronal, and sagittal) of the distribution of the radiation dose that was delivered to this area. One can see that the dose of radiation to this target is very tightly distributed to avoid as much normal tissue as possible.

How does SBRT differ from conventional therapy?

With conventional therapy, radiation is delivered in relatively small doses over the course of several weeks, with patients receiving daily treatments during that time. With SBRT, physicians are able to deliver a greater combined dose of radiation over the course of far fewer treatments. SBRT has shown dramatically better outcomes than conventional radiation therapy. Whereas two-year success rates for conventional treatment range from 30 to 40 percent, the success rates for SBRT range from 80 to 90 percent — comparable to those of resection surgery but with far fewer risks. Despite the fact that SBRT delivers higher biological dosage of radiation, patients have experienced fewer side effects, including radiation pneumonia. Slight fatigue for one week following treatment is SBRT’s most common side effect.

How does SBRT work?

Planning begins with diagnostic imaging to help locate the tumor and determine the area that will be treated. This includes four-dimensional imaging that maps the target area as it moves over time with the patient’s breathing cycle. In the only invasive part of the treatment, gold seeds, called fiducials, are sometimes implanted into the tumor before images are taken. Because the fiducials are visible in planning scans and at the time of treatment, physicians use them to ensure that the high-dose envelope of radiation is accurately overlying the tumor.

Radiation oncologists work with medical physicists to develop a radiation plan that ensures safe exposure to normal structures. Each of the treatment sessions takes 30 to 60 minutes and, unlike with more invasive therapies, the patient leaves each treatment free of significant pain or side effects. Treatments do not have to be administered on consecutive days, but the entire course of therapy is usually concluded within 10 days.

Who can benefit from SBRT?

Lung cancer candidates for SBRT are patients with small tumors — five centimeters or less — who are poor candidates for surgery due to the risk of functional deficit. Patients whose tumors are located centrally or close to airways or the heart have sometimes been considered poor candidates for SBRT due to higher complication rates. UCLA radiation oncologists have successfully treated these patients using slightly lower doses of radiation in combination with radiofrequency ablation. The two treatment modalities offer different toxicity profiles and provide good treatment of tumors with less risk to patients’ breathing function.

What are the indications for Stereotactic Body Radiation Therapy (SBRT)?

SBRT has been used for many localized tumors (up to 6-7 cm), or a few tumors (up to 3-5 usually) throughout the whole body. The list of tumors that has been treated successfully at UCLA and throughout the world with SBRT continues to grow. They include: primary lung cancer, and tumors that have spread to the lung, pancreatic tumors, bile duct tumors, primary and metastatic liver tumors, kidney tumors, prostate cancer, pelvic tumors, sarcomas, metastatic tumors throughout the body (otherwise known as oligometastases), and more. (See a list of other indications).

In certain highly selected circumstances, we may be able to offer SBRT as the modality of choice for patients that have previously received a full dose of external beam radiation therapy and now have recurrent but localized tumors. SBRT is a rapidly maturing technology that requires specialized clinical and technical expertise.

What is required to perform SBRT treatments for a localized tumor?

SBRT requires highly accurate, precise, and focused radiation delivery to be successful because of the high dose of the treatment and the rapid radiation dose drop-off. It utilizes the same principles that have allowed Radiation Oncologists and Neurosurgeons to successfully deliver highly focused and precise radiation treatment to brain tumors, and brain metastases. Unlike the CNS, however, tumors and organs throughout the body can potentially move with breathing and other factors. SBRT treatments require accurate and precise tumor localization at the time of radiation simulation (Figure 4). Our expert team works closely with our interventional radiologists or surgeons to minimal invasively place into a patient's tumor, fiducials (tiny gold seeds, or coils) into a patient's tumor in as minimally invasive a way as possible. These fiducials act as localizing and tracking devices (Figure 5). Fiducials assist us in targeting the tumor more accurately and precisely. The placement of fiducials is a procedure much like obtaining a biopsy for the tissue diagnosis of the cancer and is safely performed under image-guidance.

SBRT requires accurate and custom mapping for each individual patient's anatomy and organ motion so that we may be able to optimally target the tumor and simultaneous spare the surrounding normal tissue. We utilize any and all potential imaging modalities such as PET, MRI, CT, as well as other novel imaging platforms to localize the tumor in four dimensions. It requires highly sophisticated radiation delivery systems not available in most radiation oncology practices. More importantly, it requires clinical expertise and experience which allow our expert radiation oncologists to make sound treatment judgments regarding a recommendation for SBRT. In addition, you can be assured that our expert team will competently follow-through with an efficacious and safe SBRT radiation plan at the time of treatment. Instead of several weeks of conventional radiation therapy, patients complete their SBRT in a short-period of time, usually over a one week period, minimizing the inconvenience of daily trips to the radiation oncology facility. 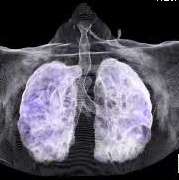 Figure 4. Accurate and precise tumor localization at the time of radiation simulation. 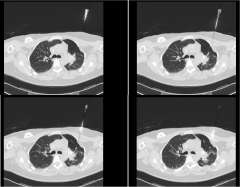 Why should you have SBRT treatments at UCLA?

At UCLA, we have unmatched clinical and technical expertise in performing SBRT that is done in a rational and meaningful manner. At the UCLA SBRT Center of Excellence, which is led by our expert radiation oncologists and medical physicists, you can expect only the best clinical care from the minute you walk into our clinic, until you have completed your SBRT treatments. We have the experience and track record to optimally deliver this type of highly specialized treatment.  At UCLA, we have the technology to implement this potent, accurate, and precise radiation therapy. We utilize the state-of-the art radiation machines such as the Novalis TX to deliver SBRT. Here, we will follow your cancer care after your treatment in our SBRT follow-up clinic on a routine and as-needed basis, in order to assess treatment response, manage any and all potential side effects, and offer any further treatments that may be beneficial. Furthermore, you can expect that our expert radiation oncologists and clinical supporting staff at UCLA will treat you with the utmost care and respect during this period of time.

At UCLA, we have strength in our colleagues, whom we work closely to design, optimize, and implement patient-individualized SBRT treatments. These include our world-class specialists in diagnostic radiology, interventional radiology, surgical oncology, medical oncology, and internal medicine. In addition, we are investigating approaches to combine SBRT with other local treatment modalities. We are cutting-edge, pushing the clinical and technological envelope with the aim to move this treatment modality forward for the benefit of our patients. We have funding support and believe in clinical protocols to continuously improve our results with SBRT.

Finally, we believe that you will get the best SBRT treatment and clinical care at UCLA compared to anywhere in the country - or the world. Our promise to you is that we will deliver cancer care that is second to none. We hold ourselves to this standard each and every day with the goal of improving our patient's treatment outcomes.

What should you expect after SBRT treatments?

On the days of SBRT treatment delivery, you will be positioned carefully on our Novalis TX linear accelerator. Our expert radiation therapists will perform proper measures to ensure that you are comfortable, and that we can confidently localize the tumor in your body that will be treated. Our expert SBRT radiation oncologists and medical physicists will be at the treatment console, utilizing all available on-board imaging technologies to deliver the SBRT treatment as close to the intended original treatment plan as possible. We will also take into account any and all potential patient-specific, tumor-specific, and organ-specific motion in real-time during treatments. You will be awake, and should be able to finish the SBRT treatments without pain. You will be able to walk off the treatment table in a comfortable fashion.

After treatment, we will instruct you regarding care for any potential side effects. You will have follow-up in our SBRT clinics in order to assess treatment response, monitor and treat any delayed side-effects, as well as receive recommendation regarding any future potentially beneficial treatments.

What is the data supporting the use of SBRT treatments?

As previously stated, these accurate, precise, and high-dose treatments require expertise so that the treatments can be delivered properly. Early results suggest that SBRT is as effective as, and likely more effective than standard radiation therapy - especially for early stage lung cancer, gastrointestinal tumors such as pancreatic tumors, and liver tumors. In lung tumors, there is convincing evidence from the United States, Japan and Europe that SBRT may be as effective as surgery for early stage lung cancer. It is certainly the treatment modality of choice for patients who cannot undergo surgery to remove their tumors from either a medical or technical perspective. We cautiously state that our own results with SBRT at UCLA have shown similarly encouraging outcomes.

Stereotactic body radiation therapy is not for everyone. Because of the high-dose nature of treatment, sound judgments have to be made in order to decide who may benefit most from this treatment option.