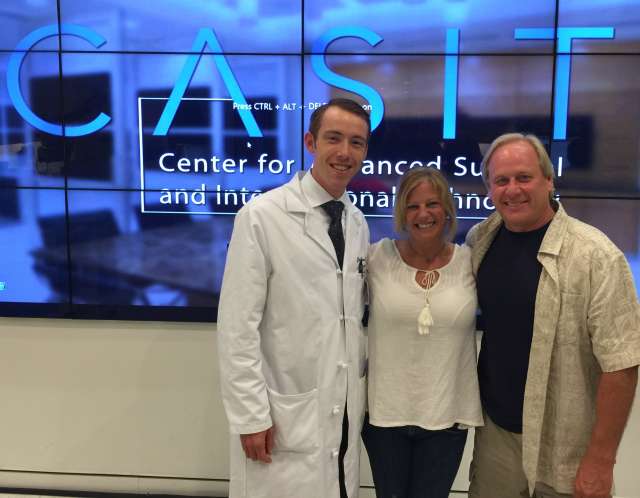 After completing general surgical residency here at UCLA in 2013 I moved to Pittsburgh for specialty training in surgical oncology. I did not intend to focus on robotic-assisted surgery during my time in fellowship and in fact, I was skeptical about the utility of the  robot  for  complex surgical oncology in general. However, upon arriving in Pittsburgh and seeing what groundbreaking clinicians such as Dr. Zeh were doing, including  robotic-assisted pancreaticoduodenectomy, I understood the potential quantum leap this represented. I quickly became involved in formal training with the robot and was able to take advantage of a fledgling training curriculum spearheaded by Dr. Hogg at UPMC. The pre-clinical modules she implemented were instrumental in developing the skills necessary to take part in actual operative cases and by the end of my two-year fellowship I felt well-prepared to translate my training into a clinical practice in surgical oncology here at UCLA.

As in most institutions robotic-assisted surgery has developed relatively slowly since the first commercially-available robotic system became available just over 10 years ago. Urologists and Gynecologists are credited with developing some of the early, clinically-relevant applications. However, thoracic and cardiac surgeons, and now general surgery, ENT and colorectal surgeons have all emerged as specialists with clinically-active robotic surgery programs.

Improvements in the technology as well as an increased awareness of the possibilities afforded by robotic assisted surgery have probably driven a large part of this growth.

As robotic-assisted surgery has developed there has been a growing need to provide training to residents who are increasingly expected to have robotic skills upon graduation. With no formal curricula  available  nationally, resident exposure and competency in robotic techniques is  highly variable across specialties and between institutions. Given this acute need for formalized training, UCLA is in the process of developing and implementing specialty-specific curricula which seek to integrate robotics training longitudinally through the residency training program.

This longitudinal exposure is important since we have learned from laparoscopic surgery training that competency is gained from a sustained combination of didactics, pre-clinical simulator-based teaching, and a graduated exposure to low-complexity- followed by higher complexity operative experience. The robotic platform requires an additional preliminary step of 'learning the instrument' which entails knowing where the controls are and how to use them as well as the technical aspects of setting up and using the instrument. Thankfully this learning is typically accelerated by the intuitive nature of the controls as well as the generally ubiquitous exposure to video gaming in surgical trainees which provides a familiar neurocognitive framework to build upon.

The Department of Surgery at UCLA is uniquely advantaged in our robotic training mission due to the CASIT facility which provides a state-of-the-art space where residents are able to train using simulation-based modules. This includes virtual-reality  simulations as well as 'dry lab' models and 'wet lab' bio tissue drills which are performed  using non-clinical robotic systems which are available 24/7. Extensive research in the field of resident education has  demonstrated that these simulation-based training curricula are effective and allow trainees to achieve a baseline level of competency which then allows a safe transition to their operative experience. The curricula in development at UCLA are incorporating these elements as well as developing new, innovative techniques which aim to extend our ability to simulate clinical conditions in a non-clinical setting.

Month-long intensive training programs have been conducted bi-annually since 2015 and have also included cadaver dissections, live-animal surgeries, and ex-vivo tissue models. Furthermore, CASIT serves a research role both in resident education as well as in the development of new technology.

The minimally-invasive movement has revolutionized a large segment of abdominal/pelvic surgery and continues to evolve. It is impossible to predict what innovations will  come next though it is not hard to imagine that the field will continue to grow as technology improves. Robotic- assisted surgery has the potential to allow the development of morecomplex minimally invasive approaches that may not be practical or feasible to perform 'straight-laparoscopically.' Pancreaticoduodenectomy is a perfect example in that only a few extremely gifted laparoscopic surgeons have been able to safely and consistently perform it laparoscopically, but with the advanced visualization and instrumentation of the robot there can be a blunting of the learning curve which makes such a complex procedure more applicable and clinically relevant.

While robotic-assisted pancreatic surgery has by no means supplanted the traditional open approaches it has certainly established itself as a safe and clinically-equivalent option for treatment of a wide variety of pancreatic diseases, including cancer. This has been shown by work done by Dr. Zeh and others. I envision we will increasingly be able to offer robotic-assisted pancreatectomy as an option for patients who are appropriate candidates.

I feel that robotic-assisted surgery is best thought of as a tool by which complex minimally invasive operations may be performed. A common misconception is that the operating robot has a degree of  autonomy and helps make decisions and this could not be further from the truth. My favorite analogy is that of the use of computers in advanced aeronautics: in order to fly a fighter jet there must be a computer between the pilot and the control surfaces of the airplane (rudder, elevators, ailerons, etc.) to refine and smooth the movements of the pilot. Clearly the pilot is still necessary to fly the plane just as no surgery would be performed without the surgeon controlling the robot.  The operating robot eliminates tremor and scales   the surgeon's movements while also providing magnification and 3D vision and greater degrees of freedom of motion compared to traditional laparoscopic instruments.

The clinical benefit of robotic-assisted surgery always boils down to patient outcomes. Initially, the impetus to develop a robotic-assisted approach  to any given procedure is usually to improve upon the current standard operation.  However, in the development  phase  we  usually settle for outcomes which are equivalent to open operations.  Once  the procedure becomes routine we expect patient outcomes to improve in some way, whether it is a decrease in post-operative pain or need for hospitalization, improved recovery, decreased need for intraoperative conversion of a minimally-invasive operation to an open one, or some other metric. Prostatectomy is a shining example of a procedure where robotic-assisted laparoscopic surgery has     made possible a procedure where outcomes have been reliably improved by the adoption of a minimally-invasive approach. I believe robotic-assisted pancreaticoduodenectomy has the same potential though rigorous study will be required to be able to determine its overall value to patients. 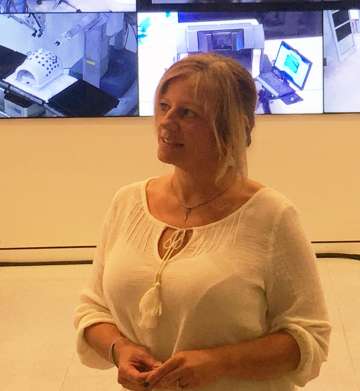 For Rose Lovett and her husband Scott their experience of Robotic Assisted Surgery could not have been any more life changing. “If there is something good  that will come from this whole  experience, then that can only but be a good thing. We are happy to help tell  the story so that other patients will also benefit from this type of procedure.”

Rose was discharged 4 days after surgery. She was thrilled at the rate of her own recovery, so much so that she was able to get back to spending quality time with her family. “My son was really worried about my Surgery”. However, “it could not have been any smoother”, she said. Especially in terms of the more traditional approach to performing this procedure. So much so that it has only been a few weeks and she is back exercising and using the treadmill! What a team, way to go for your belief in this Surgery Rose, in good “hands” of skilled Surgeon Dr. King!

It was very clear to Rose from the onset that Robotic Assisted Surgery was the path she wanted to pursue, she was not intimidated by the Technology in the slightest. If anything the minimally invasive technique made perfect sense. After meeting with Dr. King everything fell into place, the relationship and bond was in place and the Robot became the tool to bring everything together and change Rose’s life.

The smile on Rose’s face, her gratitude and belief in this story meant that no words were needed. When she came to tour CASIT, Dr. King and CASIT staff had all the validation that they needed. The goal had been achieved.

The constantly changing technology in the field of robotic surgery represents both a benefit and a challenge to surgeons. Every development, whether a new type of instrument or improvement in optics or any other incremental change in the robotic console, has the potential to improve upon the way we do things currently. However, we must also evaluate the relative value  of that change in terms of how it will affect patient outcome and cost. With multiple new robotic systems in development there is the potential for decreased costs and also for new possibilities in the creation of new robotic-assisted procedures or improvement in existing ones. There may be a lot of change on the horizon, which makes it an exciting time to be involved in this rapidly evolving field.