There have been incredible advancements in the treatment of clear cell kidney cancer over the past decade largely due to efforts characterizing the disease through advancement in the laboratory. However, for rare kidney cancers such as those found with hereditary leiomyomatosis and renal cell cancer (HLRCC), most centers only evaluate and treat a small number of patients each year. This significantly limits the ability of academic centers to access and collect biological specimens which can be used to study the cancers and develop possible treatments. To address this concern, UCLA physician-researcher Brian Shuch, MD,  Associate Professor of Urology at the David Geffen School of Medicine at UCLA, has launched a unique repository to collect tumors from HLRCC patients around the nation.  Dr. Shuch has leveraged the repository and related research to determine that HLRCC, once believed to be extremely rare, is, in fact, a fairly common condition.  The repository, while in its early stages, is already bringing together important parties to further HLRCC research. 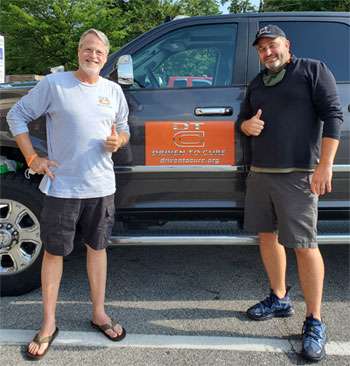 Jeff Kauffman, a resident of Brooklyn, is an HLRCC carrier. Jeff’s younger brother John was diagnosed with aggressive renal cell carcinoma (RCC) in December 2016.  The Kauffman family was able to determine the cause – a  genetic mutation in the Fumarate Hydratase gene which gave rise to the RCC. John went on to be treated at the National Institutes of Health (NIH) and would often talk about “a young man with infectious energy” who was receiving treatment for the same condition. John’s diagnosis catalyzed other family members to be tested for the genetic mutation. Three more members of the family tested positive, including Jeff, his young son and one of John’s sons.

Through his own research, Jeff discovered Dr. Shuch, who evaluated and instituted surveillance imaging with annual abdominal MRI’s for both Jeff and the children.  Despite close follow-up, in June 2020, an MRI revealed a newly developed 4 cm tumor on Jeff’s kidney. Although he was being treated at NYU Langone Health and they hadn’t spoken in years, Jeff emailed Dr. Shuch about the new diagnosis.  To his surprise, Dr. Shuch returned Jeff’s message within hours.  During their conversations, Dr. Shuch provided Jeff with invaluable guidance on his treatment.  He also mentioned the work of Driven to Cure, a nonprofit organization dedicated to advocacy for research on rare genetic forms of kidney cancer, and its leader, Bruce Lee, including the important funding provided by the organization to UCLA and Dr. Shuch’s research. Driven to Cure was founded by Bruce’s son, Andrew Lee, who was diagnosed with HLRCC at the age of 19.  Jeff came to understand that the young patient at the NIH that his brother had bonded with was Andrew Lee.  Jeff’s brother passed away in 2018 and Andrew a year later.  But Jeff and Bruce had made an important and emotional connection, tied together by Dr. Shuch’s efforts.

Jeff went on to learn about Dr. Shuch’s tumor repository in the days before his successful radical nephrectomy surgery. The goal of the registry is to identify and consent patients with HLRCC to collect biological specimens, learn about their journey and characterize specific factors which may have contributed to risk.  While Jeff’s case was advanced, the repository seeks to access HLRCC patient specimens early on as well through saliva and blood collection kits provided to patients identified with HLRCC going for routine scans and treatments. For cases like Jeff’s, the UCLA team works with local medical teams to obtain excess tumor materials after surgery and arrange for shipment to UCLA.  Upon receipt, tumors may be used immediately to establish mouse models (xenografts) of disease or banked for later research.  The laboratory mouse models are used for the assessment of human tumor biology, identification of therapeutic targets, and are an important model for preclinical testing of new drugs for a variety of cancers. In this case, they are key to advancing the science and improve therapy for HLRCC.

Despite being the first attempt at obtaining an out-of-state tumor, “everything coalesced,” said Jeff. The medical team at NYU was able to successfully ship part of his tumor to UCLA and a portion of it was immediately placed in a mouse for future testing. The remaining tumor tissue is currently growing in a petri dish (cell culture) for future research efforts.  Jeff’s willingness to participate in Dr. Shuch’s research came out of a desire to help educate both the patient and medical communities about HLRCC.  To quote Jeff, “the level of care and compassion that I received from Dr. Shuch is unparalleled, and I could only hope to support him in any way possible.”

None of this likely would have occurred without the assistance of Driven to Cure.  The non-profit provided Dr. Shuch with a critical infusion of funding to jump start the research program and development of the HLRCC tumor registry.  It also declared the UCLA Kidney Cancer Program as a center of excellence for diagnosing, treating, and the research of rare, genetic kidney cancers such as HLRCC on the West Coast. This support will also help facilitate further collaboration between Dr. Shuch’s laboratory and other key researchers at UCLA David Geffen School of Medicine including David Shackelford, PhD, Heather Christofk, PhD, Andrew Goldstein, PhD, and Paul Boutros, PhD.  The research team has also engaged various laboratory scientists and clinicians within UCLA’s Jonsson Comprehensive Cancer Center from a wide range of disciplines such as tumor metabolism, molecular biology, cancer genomics and population health to help find novel strategies to prevention, early diagnosis, and treatment.

If interested in learning more about the tumor registry study, please reach out to the UCLA Kidney Cancer Program via email:   [email protected]