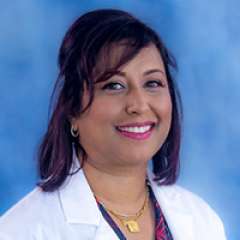 Dr. Gupta completed a PhD degree in psychology, followed by an APA accredited clinical internship at Massachusetts General Hospital/Harvard Medical Center. Her programmatic line of research focuses on the interactions between environmental and biological factors in shaping neurobiological phenotypes associated with stress-based diseases such as obesity. Broadly defined, her research aims to integrate two systems (the brain and the gut) in order to better understand the underlying mechanisms associated with obesity and altered ingestive behaviors. The application of a “systems biology” approach to her research allows her to test the interactions between multiple factors, both inside and outside the body (e.g., sex, race, brain, microbiome, inflammation, environment), in order to better understand the complex pathophysiology of obesity. This is relevant to obesity, as it is a risk factor for many chronic diseases, and disproportionately affects ethnic minorities and women. These alarming projections have led to NIH and Healthy People 2020 priority initiatives directed at reducing ethnic and sex disparities. Her goal is to develop a comprehensive model that provides a powerful and sensitive biomarker that will increase biological readouts of obesity and altered ingestive behaviors, thus bringing to the forefront those individuals who are at increased risk as a result of disadvantaged backgrounds.

In order to pursue this line of research she recently received a R01 grant from NIMHD (NIH) on the “Social Isolation and Discrimination as Stressors Influencing Brain-Gut Microbiome Alterations among Filipino and Mexican American.” She has also received several industry funded grants as PI and till date she has published over 70 peer-reviewed articles. These grants have allowed her to focus on the following main themes of research: 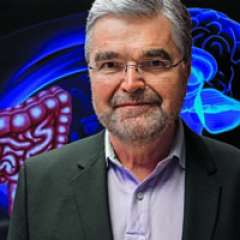 Dr. Mayer received his MD degree from the Ludwig Maximilian’s University in Munich, Germany, in 1976, completed his residency at the Vancouver General Hospital in Vancouver, Canada, and his GI fellowship training at the UCLA/VA Wadsworth Training Program. Dr. Mayer has a career long interest in clinical and research aspects of brain body interactions, with a longstanding focus on the bidirectional communication between the brain and the gut in health and disease. He is recognized as one of the leading investigators in the world of brain gut microbiome interactions in gastrointestinal disorders, including chronic visceral pain, functional and inflammatory bowel disorders, ingestive behavior and obesity. He has been continuously funded by the National Institutes of Health since 1989.

He has been PI of a NIH Center grant on sex differences in functional GI disorders for the past 18 years, and PI on a NIDDK funded U01 consortium grant of brain bladder interactions for 18 years, co-PI on a grant by the Department of Defense on brain gut microbiome interactions in autism spectrum disorders, co-PI on a Crohn’s and Colitis Foundation grant on brain-gut-microbiome signatures of stress-related IBD symptom flares, and co-PI on a NIH U19 consortium grant and a RO1 grant on brain gut microbiome interactions in Alzheimer’s disease.

He has published 401 peer-reviewed articles in the leading GI and neuroscience journals, including 100 reviews and book chapters and has co-edited three books. His articles have been cited 56,187 times and his h-factor is 121. He has published two books for the general public on brain gut microbiome interactions (the bestselling The Mind Gut Connection, and more recently The Gut Immune Connection) which have been translated into 14 languages. 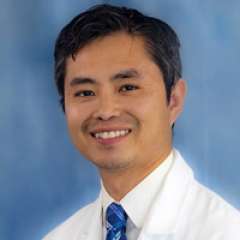 Dr. Dong graduated with distinction from Stanford University with a BS in biological sciences. He subsequently received his MD from the University of Chicago. He completed his internal medicine residency at the University of Chicago, where he stayed on as faculty for an additional year as a liver hospitalist. While at the University of Chicago, he trained in the laboratory of Dr. Eugene Chang where he investigated the role of the gut microbiome on microRNAs and colon cancer. He then joined UCLA as a gastroenterology fellow in 2016 and continued his research training at UCLA through the Specialty Training and Advanced Research (STAR) program under the mentorship of Dr. Joseph Pisegna and Dr. Jonathan P. Jacobs. He finished his PhD in molecular, cellular and integrative physiology in 2020. Dr. Dong is board certified in internal medicine and gastroenterology. 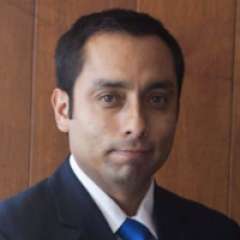 Dr. Beltrán-Sánchez' research focuses on population dynamics of health and aging with particular focus in Latin American countries. He studies the link between socioeconomic disadvantage and health from two different angles; first, how socioeconomic disadvantage makes some people die young and populations as a whole have worse health outcomes, and second, how indicators of physiological functioning link with individuals’ health outcomes, disease and disability and with populations overall survival. He co-founded the Latin American Mortality Database, the largest data repository of mortality from 19 countries in Latin America (including data from around 1850). In 2018 he received the early career achievement award from the Population Association of America. 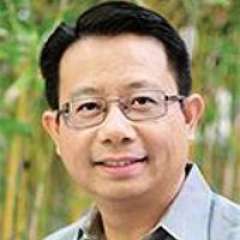 Dr. Gee's research focuses on the social determinants of health inequities of racial, ethnic, and immigrant minority populations using a multi-level and life course perspective. A primary line of his research focuses on conceptualizing and measuring racial discrimination, and in understanding how discrimination may be related to illness. He has also published more broadly on the topics of stress, neighborhoods, immigration, environmental exposures, occupational health, and on Asian American populations. 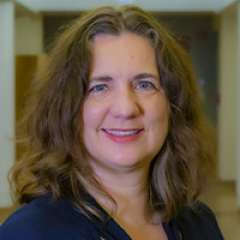 Dr. Kilpatrick graduated from UCLA with a BS with honors in cognitive science and a BS in mathematics. Subsequently, she earned a MA in experimental psychology from Radford University and a PhD in biological sciences from University of California Irvine (UCI). At UCI, she trained with Dr. Larry Cahill, investigating sex differences in the role of the amygdala in emotional memory. Dr. Kilpatrick returned to UCLA to train with Drs. Bruce Naliboff and Emeran A. Mayer as a postdoctoral fellow, who continued to foster her interest in sex differences in the neurobiological correlates of emotional processes, including pain, stress, and resilience, in the context of irritable bowel syndrome and other pain conditions.

Her work has focused on the brain-related aspects of the connection between the brain and body that positively or negatively impact health in multiple research areas with a brain-body aspect, including disrupted brain-gut communication in obesity, brain signatures related to self-body perception before and after cross-sex hormone therapy in transgender individuals, facial dysmorphia-brain morphological relationships in children with attention deficit hyperactivity disorder due to prenatal alcohol exposure, and the impact of mind-body interventions on brain functional organization in late-life depression. Further, she has sought to understand the influence of sex on brain-body dysregulation, as an important step towards tailoring effective and beneficial therapies to the individual. 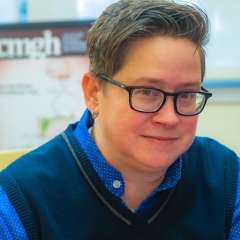 Dr. Labus is the director for the Biostatistics and Bioinformatics Core in the G. Oppenheimer Center for Neurobiology of Stress and Resilience at UCLA and director of the Bioinformatics Core in the UCLA Microbiome Center. She has made seminal contributions to mapping neural networks underlying visceral pain and elucidating brain-gut–microbiome axis in humans. Dr. Labus is an applied statistician with expertise in biostatistics, bioinformatics, treatment-outcome research, multimodal brain imaging, microbiome, metabolomics, and multi-omics integrative analysis using systems biology approaches including machine learning and network analysis. Her current research focused is on determining biological markers (e.g., brain, microbiome, metabolomics, cytokines, and microRNA) of disease, including chronic pain, obesity and Alzheimer’s disease. Using state-or-the-art computational, biostatistical, and bioinformatics approaches, she assesses the interaction between various levels of biological data (e.g. microbiota, metabolites, immune markers, multimodal brain imaging data) with clinical data. The overall goal of this systems-based approach is to identify and target the key regulators of multi’omics-biological disease-interaction networks in order to understand the pathophysiological mechanisms and provide new targets for treatment. 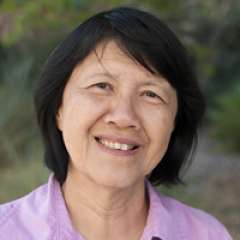 Dr. Wang's research focuses on social and physical environmental influences on child nutrition, growth and health, and the contributions of policies, systems and the environment to nutrition and well-being. She is especially interested in addressing social disparities in child nutrition and the well-being of migrant families with a global perspective, and in applying systems science methods to advancing translational obesity-related research. 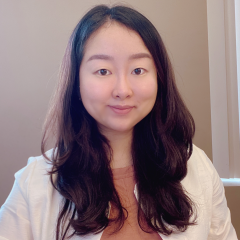 Dr. An obtained her PhD in cognitive neuroscience from Korea University, Seoul, South Korea. Previously, she worked on the association between the hormone and functional brain activity response to stress-induced eating behavior in mood disorder. She is currently working on a project investigating the brain-gut alteration of obesity in relation to discrimination and sex difference in Dr. Annie Gupta’s lab. 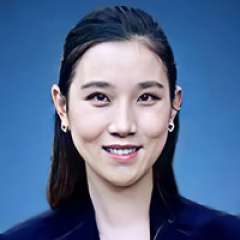 Dr. Zhang received her PhD in psychology from the University of Southern California. Her studies were focused on brain mechanisms involved in monetary and food decision-making. Her dissertation examined the impact of nutritive and non-nutritive sweeteners on value-tracking, food decisions and nutrition pathways in the brain. 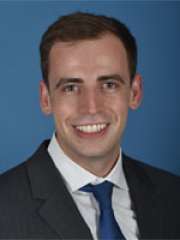 Dr. Osadchiy attended UC Berkeley and graduated with highest honors, majoring in microbial biology. Prior to medical school, he worked as an analyst at a biotech startup focused on delivering an at-home model of clinical trials to patients with rare diseases. 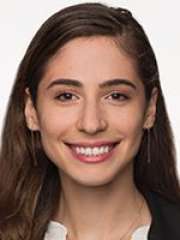 Dr. Sarnoff is currently training as a resident physician at UCLA's Internal Medicine Residency Program. Her research interests focus on the interplay between the brain, gut microbiome, and chronic diseases. She currently is investigating the brain-gut-microbiome changes in irritable bowel syndrome under Dr. Arpana Gupta. 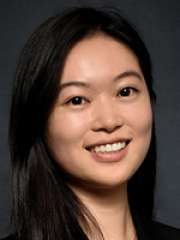 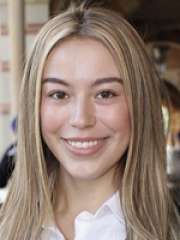 Jasmine is an undergraduate psychobiology major at UCLA. She is a work-study student for Dr. Gupta at the Center for Neurobiology of Stress and Resilience (CNSR). Under this role, Jasmine assists the study coordinator Allison Vaughan with all tasks related to study recruitment, retention, and helping with running the studies, including the clinical trials. 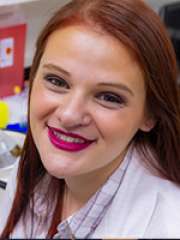 Allison is a recent graduate of Stony Brook University in New York with a master’s in public health and data analytics. Before she joined the G. Oppenheimer Center for Neurobiology of Stress and Resilience, Allison was a study coordinator investigating caregivers’ perceptions of asthma and obesity in their children. She also assisted with a beta-trial of a new app to help caregivers track their child’s asthma.