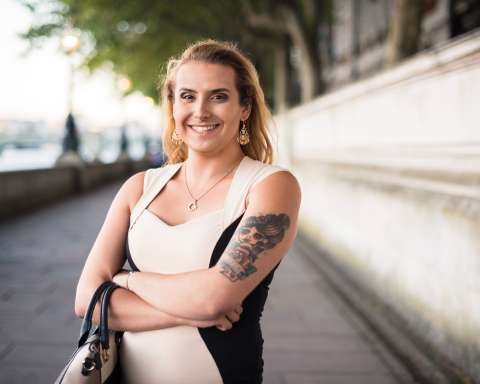 UCLA Health is a safe and supportive environment for transgender and gender diverse patients. Call 310-267-4334 to make an appointment.

Sex: Typically refers to the sex assigned at birth, based on genital anatomy and/or chromosomes. Also referred to as "birth-assigned sex" or "natal sex".

Gender identity: An individual's internal sense of being male, female or another gender.

Gender expression: The outward expression of masculinity and/or femininity. May include style of dress, hair, speech, mannerisms, peer associations and/or interests.

Transgender: Adjective referring to a person whose gender identity differs from their assigned sex at birth. May use the shortened version "trans." Use as a noun ("a transgender") or verb ("transgendered") is generally considered derogatory.

Cisgender: Non-transgender; refers to a person whose gender identity matches their assigned sex at birth. May use the shortened term "cis."

Transgender male: A person whose birth-assigned sex was female, but identifies as male. Related terms include: "transman, transmasculine." In medical care, may be referred to as "female-to-male," but this is not typically used socially.

Transgender female: A person whose birth-assigned sex was male, but identifies as female. Related terms include" "transwoman, transfeminine." In medical care, may be referred to as "male-to-female," but this is not typically used socially.

Gender non-binary: Refers to a person who does not identify exclusively as male or exclusively as female. People may have varying gender identities or identify somewhere along the spectrum between these binary genders. Related or alternative terms include: "genderfluid, genderqueer, gender non-conforming, agender, gender-diverse."

Transition: The process of developing a gender expression that matches one's gender identity. May include social, legal, hormonal and/or surgical transitions.

Transsexual: Historically refers to an individual who has pursued some medical or surgical treatment to support gender transition. Generally considered outdated.

Pronouns: A personal choice of how an individual would like to be referred to. Typical choices are masculine (he/him/his), feminine (she/her/hers), and gender-neutral (they/them/theirs, which is now considered an acceptable singular pronoun). Should be asked directly, rather than assumed from one's gender expression, sex or gender identity. 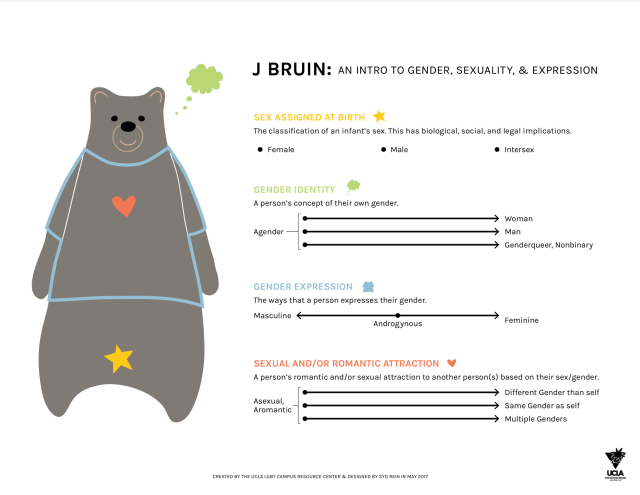 This diagram, created by the UCLA LGBTQ+ Center, is a starting point and cannot fully capture the entirety of these spectrums. Should you need a walk through of this diagram or have clarifying questions, please feel free to contact our UCLA Gender Health Program care coordinator at 310-267-4334.

MyPronouns.org is a practical resource dedicated to the empowering and inclusive use of personal pronouns in the English language.