Throat Cancer and How to Prevent It

Our head and neck surgeons consistently rank among the best in the nation. To find out more about our services, call 310-206-6688.

UCLA Health oncologist explains throat cancer and how to prevent it

Though the prevalence has climbed steadily in the past decade, long-term prognosis is good.

The diagnoses and a death of some high-profile celebrities in recent years have shined a light on oropharyngeal cancer — sometimes generically referred to as throat cancer. 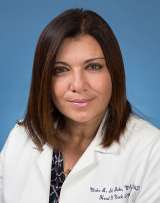 Oropharyngeal cancer is a disease in which malignant cancer cells form in the tissues of the oropharynx, which includes the back of the throat, the base of the tongue and the tonsils. Between 70% and 90% of cases are caused by HPV-16, one of the subtypes of the human papillomavirus (HPV), a disease transmitted primarily through oral sex, says Dr. Maie St. John, MD, PhD, FACS, Chair of the Department of Head and Neck Surgery and co-director of UCLA’s Head and Neck Cancer Program.

Despite the recent incidents, oropharyngeal cancer remains relatively rare, says St. John, who also is the Director of Cancer Research Career Enhancement at the UCLA Jonsson Comprehensive Cancer Center. Each year, about 12,000 cases of HPV-associated cancers of the oropharynx are diagnosed in the U.S., and more than 80% of cases are in men.

The number of lifetime sexual partners is a risk factor for developing HPV-positive cancer, as is a history of smoking, St. John says. In recent studies, prevalence was 15 percent among men who smoked and reported five or more lifetime oral sex partners, compared to less than half that (7 percent) for men who reported five or more lifetime oral sexual partners but did not smoke.

“This is in contrast to head and neck cancers linked to smoking and drinking, where the five-year survival rate is 25 to 40 percent,” she adds. St. John notes there are ongoing studies and strategies for using biomarkers to determine people at risk for oropharyngeal cancer, but no test has been validated to predict whether someone can develop it.

So, who should get screened? People who have a history of alcohol or tobacco use, a history of exposure to radiation therapy or symptoms including a neck mass, hoarseness, pain or difficulty when swallowing or chewing and a change in voice, she says.

A vaccine has been developed to protect against high-risk HPV infection and has been approved for use in people starting at age 9. However, St. John cautions vaccinating adults does not appear to protect them from developing cancer and it does not treat adults already infected.

Treatment for oropharyngeal cancer can include surgery, radiation therapy, chemotherapy and immunotherapy. New technologies have vastly improved treatment, survival and side effects from the disease, St. John says.  She calls the use of robotic-assisted surgery to treat HPV-positive cases “revolutionary;” with UCLA being the first in Southern California to perform robotic surgery on patient using the latest model Da Vinci (SP) single port robot. “It can be done transorally (by mouth), and the patient can often go home within two to three days after surgery,” she says.

UCLA is developing a specific camera-imaging system to screen for those who might be at risk for developing HPV-positive cancers and has launched educational programs for high school students, undergrads and medical students to promote HPV vaccination and to educate them on the risks of HPV-related cancers.