If you’re admitted to the hospital, your primary care physician will ensure that you receive care from a UCLA Health hospitalist. Please call us at 855-488-9550 if you have questions.

Find a provider
Our locations

Howard Brenner had his first heart attack at 41, and soon after, became a UCLA Health patient. In the past 20-plus years, Brenner, now 67, has had various imaging studies and procedures, including the placement of nine stents to open up his coronary arteries. All of this is documented in his electronic medical record.

The benefit of having his extensive medical history in one place became important in mid-January, when Brenner experienced severe chest pain during a particularly stressful day at work. He knew he should go straight to the emergency department, and decided to meet his wife, Lynda, at Providence Tarzana Medical Center, a midway point between his office in Glendale and their Westlake Village home. 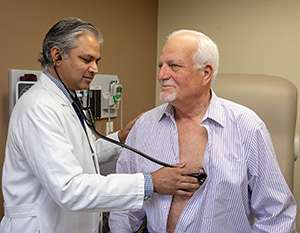 When he arrived in the emergency department, Brenner was given a medication to lower his blood pressure. He was then admitted for testing and moved to a private room. Soon after, Dr. Emily Law, a UCLA Health hospitalist physician, came in and introduced herself. She let Brenner and his wife know that she'd already reviewed his chart through the online portal, and would reach out to his cardiologist, Dr. Ravi Dave, UCLA's director of interventional cardiology, to let him know what was going on.

Immediately, Brenner says, he felt relieved. "It was so reassuring to have a UCLA physician there in Tarzana, with access to my entire medical history," he says. When he received a call from Dr. Dave, who told him he knew he was hospitalized and felt confident in the plan, Brenner says he felt even better.

Dr. Law also called Encino-based UCLA Health cardiologist, Dr. Boris Arbit, who visited Brenner in the hospital the next morning. "I already had a very clear picture of his medical history when I arrived," Dr. Arbit says.

This coordinated, patient-centered approach is by design. "We work as a team to make every experience in the hospital as comfortable and stress-free as possible," Dr. Law says.

When it was time for Brenner to be discharged, Dr. Arbit explained how they had increased his blood pressure medication and scheduled his follow-up appointment with Dr. Dave in a few days.

When Brenner went in for that visit, he told Dr. Dave how impressed he was with his inpatient care. "Going to the hospital with chest pain can be scary," he says, "but having UCLA physicians there made me feel thankful and calm."