As leaders in COPD care, we deliver effective treatments and support. Call 310-825-8061 to connect with an expert.

Chronic Obstructive Pulmonary Disease (COPD) is a common, preventable, and treatable disease that is characterized by persistent respiratory symptoms and airflow limitation that is due to lung abnormalities. This disease is most commonly caused by significant exposure to noxious particles or gases, and mostly affects former and current smokers. However, those exposed to significant air pollution, including smoke, dusts, and gases may also develop COPD. COPD is also seen among individuals with genetic predisposition, especially in a condition called Alpha-1 Antitrypsin Deficiency.

COPD is projected to be the 3rd leading cause of death in United States by 2020, currently leading to over 140,000 deaths and over 700,000 hospitalizations annually in US, and more than 3 million deaths (or 6% of all deaths) worldwide. Progressive disease may lead to severe debilitation, muscle and weight loss, chronic respiratory failure requiring oxygen therapy, and death. Early diagnosis is crucial to slowing progression of the disease, and treatment is tailored depending on the presenting symptoms and diagnostic tests. 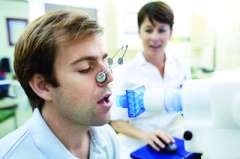 The following are the most common symptoms for Chronic Obstructive Pulmonary Disease:

The symptoms of chronic obstructive pulmonary disease may resemble other lung conditions or medical problems. Consult a health care provider for a diagnosis. To learn more about COPD, including treatment, visit our health encyclopedia >