As leaders in COPD care, we deliver effective treatments and support. Call 310-825-8061 to connect with an expert.

What is Alpha-1 Antitrypsin Deficiency?

Alpha-1 Antitrypsin (Alpha-1) Deficiency is a genetic condition that results from inheriting an abnormal gene from parents. Each parent passes one copy of the Alpha-1 gene on to their child, and if two abnormal copies of the gene are passed down, Alpha-1 deficiency can occur, while if just one copy is passed down, the child may be an asymptomatic carrier of the abnormal gene without being affected by deficiency. The Alpha-1 gene produces a special enzyme in the blood that helps keep the balance between tissue growth and breakdown, and deficiency can result in increased susceptibility to damage in the lungs, liver, and skin, including emphysema of the lung, leading to COPD, as well as cirrhosis of the liver. For more information about this disorder, check out the American Thoracic Society’s educational video > 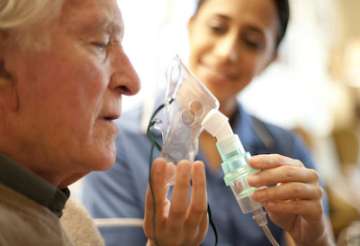 What are some signs or symptoms of deficiency?

While most patients may not have any symptoms when they are young, eventually symptoms often develop, including:

Alpha-1 Antitrypsin Deficiency testing is recommended for certain groups of people, including those who have these at-risk conditions:

We provide Alpha-1 testing in our clinics, as well as through a partnership with the Alpha-1 Foundation’s research testing registry >

Alpha-1 Antitrypsin Deficiency is a treatable, but not yet curable disorder. Currently, infusions of Alpha-1 supplement are given on a regular basis to reduce the risk of the disorder in select patients who meet certain criteria. In advanced disease, lung and/or liver transplant may be necessary. For more information about how Alpha-1 Defiency is treated, make an appointment with a member of our team, or you can learn more from some of the resources below.