How to Prepare for Surgery

The most important thing is to maintain your emotional and physical well-being.

Eat well, stay hydrated, and get plenty of rest. The night before surgery, you will need to stop eating or drinking at midnight. The morning of surgery, it is okay to take your medication with small sips of water. 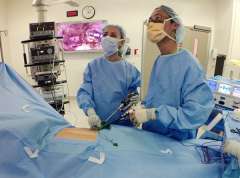 What to Expect on the Day of Surgery

You will be given a time to report to the hospital. After you are checked in, you will be brought into the pre-operative area. You will visit with all of your team members – nurses, anesthesiologists, and the surgery team. There will be time to ask questions and discuss the plan during and after surgery.

How is Adrenal Surgery Performed?

There are several ways to approach an adrenal surgery. 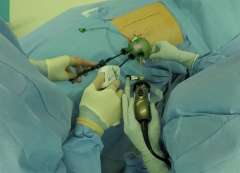 Prior to the 1990s, adrenal surgery was performed through a large open incision and required a hospital stay of approximately one week. Open adrenalectomy is still required for patients with adrenal cancer. The newer minimally invasive techniques are usually reserved for non-cancerous adrenal tumors. Read more about these minimally invasive, endoscopic approaches below.

Retroperitoneal adrenalectomy using a posterior approach is done using 3 small "band-aid" incisions on the back. This technique was developed in the late 2000s, and slowly being used more and more at a small number of expert centers.  Retroperitoneoscopic adrenalectomy was adopted by UCLA in 2013.

At present, UCLA Endocrine Surgery is the only center in the United States offering this new single-incision technique instead of three.

What are the Advantages of Retroperitoneoscopic Adrenalectomy? 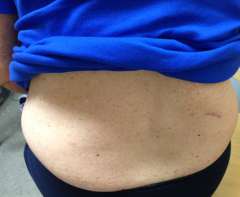 We have been performing retroperitoneal adrenalectomy at UCLA since 2013. The operation is performed under a general anesthetic, with the patient positioned lying on their belly on a specially padded operating table. A single 2.5cm incision is made just beneath the bottom rib on the back, on the same side as the adrenal mass. A fiberoptic camera and two laparoscopic instruments are placed through this incision. The operation usually lasts 1.5 hours.

Am I Eligible for Retroperitoneoscopic Adrenalectomy? 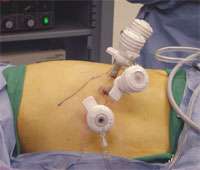 Port placement for laparoscopic adrenalectomy. Patient is positioned lying on the right side.

During the 1990s, laparoscopic transperitoneal adrenalectomy became adopted by expert centers across the nation. This was a major advance that greatly reduced pain, complications, blood loss, and recovery time for patients.

Laparoscopic transperitoneal adrenalectomy is generally done using 4 small “band-aid” incisions through which ports are placed to accommodate the endoscope and instruments.  This technique remains widely used today and continues to be a part of our practice for patients with extremely large adrenal tumors.

The surgeon's view of the operation is via a lighted fiberoptic camera placed through one of the ports.

Patients who have had previous abdominal surgery are still eligible to undergo laparoscopic adrenalectomy in most cases.

At UCLA, we have successfully removed tumors >7 cm in diameter using the laparoscopic approach without event. The operation is performed under a general anesthetic, with the patient positioned lying on one side. Four 10 mm (3/8 in.) small cuts are placed just beneath the rib cage on the same side as the tumor.
A fiberoptic camera is used to guide the operation, which typically lasts 1.5 to 2.5 hours.

What to Expect After Surgery

Most patients experience little pain and are able to leave the hospital 1-2 days after surgery, though this varies depending on the type of adrenal tumor being treated. Full recovery is rapid. Patients are generally able to return to work 1 week after surgery.