A mother of 3 reflects on her children's battle against a one-in-a-million genetic disorder. 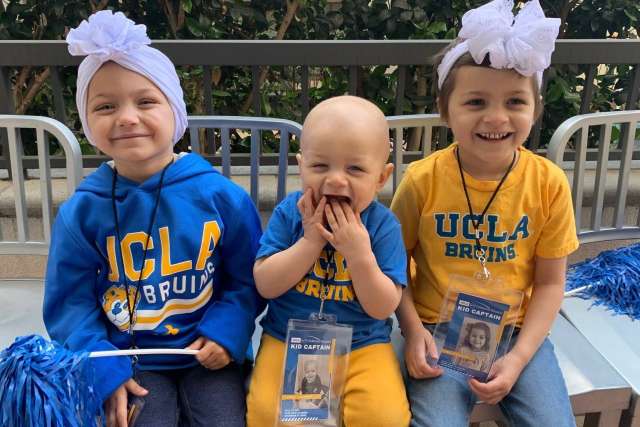 Olivia Langenhop, the fourth child in the world to undergo treatment – offered only at UCLA Health – for her deadly genetic disorder, gleefully waved a blue pom-pom a week after leaving the hospital.

During a special Zoom call with the Bruins football team in December, Olivia, 3, sat between the second and third patients to ever receive that same gene therapy – treatment for a rare disorder called Leukocyte adhesion deficiency-1, which hobbles the immune system.

Olivia laughed and played with the other kids, who happened to be her older sister, Ava, 5, and baby brother, Landon, 1. In a celebratory moment for the siblings, they served as honorary Kid Captains for the Dec. 12 game against USC.

Their parents, Jon and Alicia Langenhop, temporarily moved the family from Ohio during the middle of the COVID-19 pandemic to give the siblings the best chance for survival. And with Olivia’s release from UCLA Mattel Children’s Hospital, their treatment was complete. 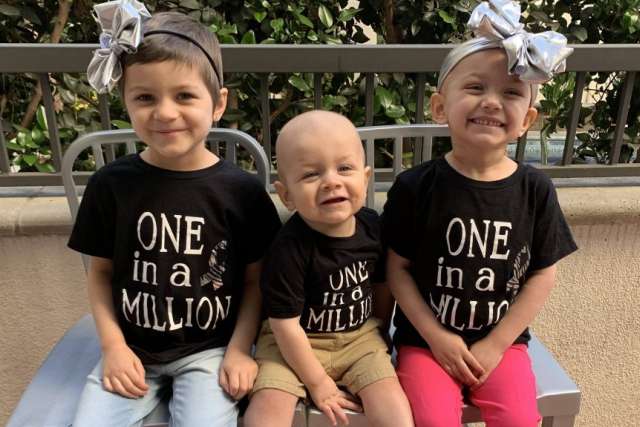 Landon Langenhop, center, with his sisters Ava, left and Olivia, all received treatment at UCLA Health for a one-in-a-million genetic disorder. (Photos by Alicia Langenhop)

“In a way it’s kind of a blessing that all three of them are going through it together,” Alicia, 31, said. “They’re bonding so much.”

A matter of odds

In the summer of 2019, Alicia and Jon were a few months away from the birth of their third child when they found out their daughters shared a condition that prevents their white blood cells from fighting infection because of a missing protein.

Leukocyte adhesion deficiency-1, or LAD-1, occurs in about 1 in 1 million children worldwide. The recessive disorder is caused by mutations in a gene carried by both parents.

By the time Ava was 8 weeks old, she had been hospitalized twice for infections. Olivia constantly had colds, ear infections or rashes and also required hospital stays.

Meanwhile, Alicia worked as assistant director of a child care center that the girls attended.

It was only after Ava visited a dentist who expressed concern that her gums bled so easily that the Langenhops sought genetic testing. With the diagnosis, they were told the girls, then 3 and 2, would need bone marrow transplants, which offered a success rate of about 75%.

The best hope was that the new baby would be a match for one of them. But after Landon’s birth in October, the couple found out before leaving the hospital that he too had inherited both copies of the defective gene. 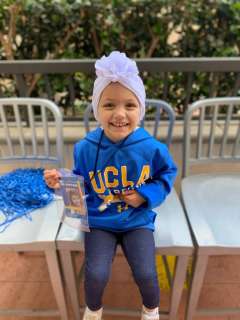 “They say about 1 in every 1 million people have LAD-1,” Alicia said. “We really felt like we must be the unluckiest family in the entire world.”

The odds of any one of the Langenhop kids having LAD-1 were 25%. The chances of all three were about 1.5%.

“Lightning doesn’t strike that many times. There’s no way our third kid will have it,” Alicia remembered thinking before receiving the results. “My jaw just hit the floor. I was in disbelief that all of the babies would have to go through the same thing.”

A call from Los Angeles

As the Langenhops sought media publicity to find bone marrow matches, their plight caught the attention of Donald Kohn, MD, a researcher in the UCLA Eli and Edythe Broad Center of Regenerative Medicine and Stem Cell Research.

He was leading a new clinical trial for children with LAD-1 that used gene therapy in a months-long process that would eliminate the potential rejection risks of a bone marrow transplant. The treatment works by harvesting the defective blood-making stem cells, correcting the mutation in a lab, and then transplanting the properly functioning cells back into the child’s body.

“The whole idea of gene therapy is the patient is their own donor so they’re a perfect match,” said Dr. Kohn, professor of pediatrics and of microbiology, immunology and molecular genetics. 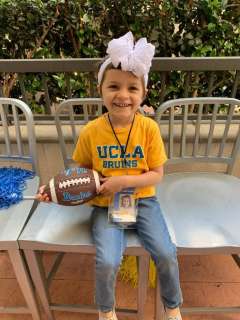 Dr. Kohn reached out to the family’s medical team in Ohio and Ava was the first of the three to enroll in the trial sponsored by Rocket Pharmaceuticals of New York.

“There was essentially no risk for this,” Jon said. “This is kind of a no-brainer decision for us to at least attempt to get it done.”

Dr. Kohn said all three children had severe cases that generally mean an expected life span of one year. Symptoms include delayed detachment of the umbilical cord stump after birth, bacterial and fungal infections, severe gum inflammation and slow-healing wounds. He said white blood cells are made in the bone marrow and then enter the bloodstream to fight infection. But with LAD-1, the cells can’t get to the site of infections, he said, likening them to fire trucks ready to respond but unable to reach the scene.

“A simple infection that should normally be cleared up can just expand and grow and be very hard to treat,” Dr. Kohn said.

Treatment and then a pandemic

In December 2019, Ava received medication that causes the stem cells to enter the blood stream where they are then collected through an IV line over about four hours. Not enough were retrieved, however, so she underwent the procedure again in February 2020. 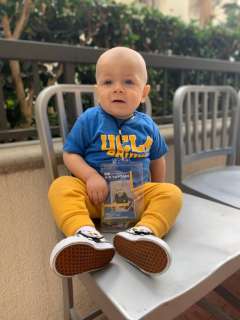 Her stem cells were sent to a lab where the missing gene was added using a virus that infects the normal gene into the DNA of the stem cell.

“That’s the critical piece of the technology,” Dr. Kohn said. “Once it’s in there, it’s in there permanently.”

Although that process only takes three days, the lab needs about two months to test all the cells for contamination as well as ensure that enough cells took the gene and can still grow, Dr. Kohn said. Once transplanted, they will replicate to make new white blood cells with the necessary protein.

The plan was for Ava to undergo her transplant in May, but then the COVID-19 pandemic threatened to delay the process.

“We didn’t want to hold off,” Jon said. “We wanted to go as fast as possible. We had three kids that needed to go through this.”

In late April, the family boarded a near-empty flight to Los Angeles. The company sponsoring the trial put them up in a Westwood apartment within walking distance of the hospital.

Before the transplant, Ava underwent chemotherapy at UCLA Mattel Children’s Hospital to clear the bone marrow of the defective stem cells and make room for the new ones to grow and become the source of new blood production. Her own cells were then injected back into her bloodstream.

“The process of the transplant took 10 minutes, max, and it’s over,” Jon said.

Ava stayed in the hospital for monitoring for almost a month. Because of the pandemic, the Langenhops decided against returning home in between each child’s treatment.

Landon’s transplant came next and he celebrated his first birthday on Oct. 1 in the hospital. He handled the chemo the best, although he stopped eating, drinking and smiling for a time afterward.

COVID-19 also curtailed visits from family, leaving them largely on their own, with one parent staying in the hospital and the other tending the two at home. Jon continued to work remotely for a bank, logging on from the hospital.

Their UCLA care team helped fill the void. Nurses would come by to say hello even during shifts when they were assigned to other patients. Dr. Kohn invited the family over to swim at his house over the summer, earning him the role of surrogate grandfather.

“We really just felt like every single person there was invested in our story and our family,” Alicia said. “They really couldn’t wait to come check on the kids.”

Olivia’s transplant came last and she was released from the hospital Dec. 2.

“It was better than the alternative but it was still a lot to go through,” Dr. Kohn said. “The parents really pulled off a heroic thing to go through this with three kids.”

Before the call with the football players, the girls were thrilled to dress up in the fan gear sent over by the team. Ava wore a gold UCLA T-shirt, Olivia sported a UCLA cap backward over her bald head and Landon played with a blue foam hand.

The players took a break from practice two days before the game to give the children a virtual tour of their facility and teach them the famous Eight Clap.

Linebacker Shea Pitts asked the girls to introduce themselves and share their favorite color and sport.

“Yeah! That’s what we like to hear,” Pitts replied.

When Olivia said football was her favorite sport, the team applauded her.

On game day, the family watched in their apartment, pointing out to the kids the cardboard cutout images of themselves at the stadium.

Prognosis for the future

So far, Ava has been able to stop taking antibiotic and antifungal medication three times a day to preemptively ward off infection. Her brother and sister will follow suit.

“The amount of working cells they have should be enough to sustain a normal life,” Jon said.

Dr. Kohn said the Florida patient who was the first to participate in the trial before the Langenhop siblings is perfectly fine a year and a half later. Gene therapy for so-called bubble baby disease has so far proven successful more than a decade after cells were first treated.

“We avoid using the c-word – cured – because you don’t know that until they’ve lived their entire life without a problem, but we hope they are,” Dr. Kohn said of the Langenhops. “It’s magic. It’s amazing.”

The Langenhops flew back to Ohio in time for Christmas. Alicia said the children were thrilled to explore their house again and run into the backyard to see snow.

They’ll return to UCLA for follow-up appointments, with their first visit potentially in May.

“We just feel like we’re so lucky to have this available, to live in a time where science is at this point,” Alicia said. “We couldn’t be happier. We feel really lucky this is the place we were brought to.”

Find out more about the Broad Stem Cell Research Center.