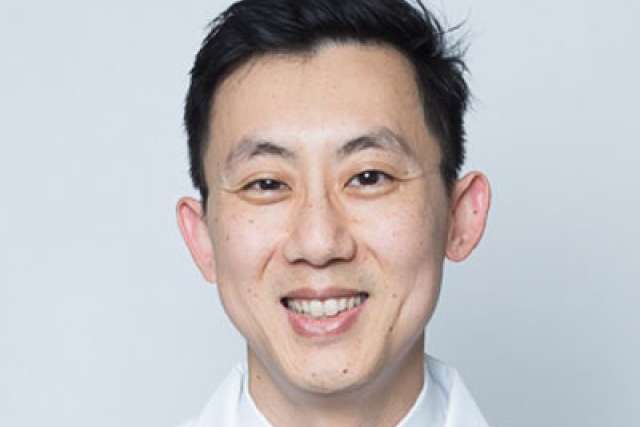 Dr. Robert Chin, a radiation oncologist with UCLA Jonsson Comprehensive Cancer Center, will describe recent research on personalized treatment for HPV-associated oropharyngeal cancer – particularly for patients with an inherited variant KRAS gene – during a panel discussion on radiation and cancer biology at ASTRO, the annual meeting of the American Society for Radiation Oncology. This research represents current and future efforts to identify patients uniquely sensitive to innovative targeted treatments.

The research builds on studies led by Dr. Joanne Weidhaas at UCLA Jonsson Comprehensive Cancer Center, who found that about 16% of head and neck cancer patients have inherited a variant KRAS gene. When these patients receive standard chemoradiation treatments for their HPV-positive squamous cell cancers of the oropharynx, they have both worse toxicity and worse rates of cancer control, Chin said. However, these poor outcomes may be reversed with the addition of a short course of cetuximab.

“In standard clinical practice, tumors are assumed to be different, but patients mostly uniform,” Chin said. “Thus, we spent a lot of energy analyzing tumors. However, we have since come to understand that our body’s own immune system is crucial in making treatments effective. Matching the right body to the right treatment may make our treatments less toxic and more effective.”

Chin said UCLA researchers are conducting a clinical trial in which patients with this unique combination – having both the KRAS-variant and HPV-positive squamous cell oropharyngeal cancer – are randomized to either standard of care treatment or standard of care plus cetuximab. “We think this approach of identifying unique clusters of patients may be a way for us to design new treatments that are more personalized and effective,” he said.

In 2006, researchers discovered the KRAS-variant, an inherited genetic mutation found in up to 25 percent of people with cancer. The variant, a biomarker that disrupts a class of important regulators called microRNAs, has been shown to predict response to cancer therapy for many cancers.

Chemotherapy and radiation therapy, the current standard-of-care modalities for HPV-positive squamous cell carcinoma of the oropharynx, typically have about a 5-10% treatment failure. The failure rate is much higher in KRAS-variant patients. However, the addition of a short course of the monoclonal antibody cetuximab has been found to reverse this effect. Weidhaas’ research team found that cetuximab may be working by helping the immune system of people with the KRAS-variant better fight their cancer.

HPV, the most common sexually transmitted infection in the United States, is thought to cause about 70% of oropharyngeal cancers in the United States, according to the Centers for Disease Control and Prevention. This is increasingly becoming the most commonly diagnosed cancer of the head and neck. Chin’s discussion will address current studies focusing on treatment for this specific patient population.

This and related research at UCLA Jonsson Comprehensive Cancer Center has provided evidence that patients with variant KRAS may have an altered immune system. This likely explains both elevated cancer risk as well as benefit from cetuximab for these individuals. Chin’s discussion will describe how new insights are being exploited to identify people who respond differently to therapies that depend on the immune response. Additionally, the use of this and similar biomarkers may be used to design personalized radiation therapy and immune therapies for cancer.