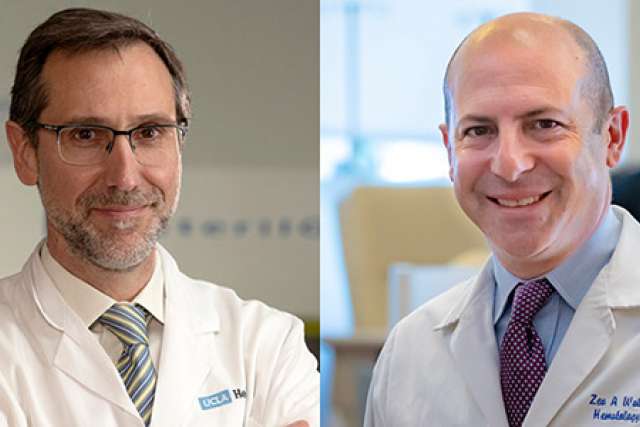 LOS ANGELES – Patients with advanced colorectal cancer may be spared from a toxic side effect caused by a type of targeted therapy used to treat the cancer with the help of another drug normally used to treat melanoma, according to a study led by researchers at the UCLA Jonsson Comprehensive Cancer Center and Memorial Sloan Kettering Cancer Center.

For the past decade, epidermal growth factor receptor (EGFR) inhibitors have helped prolong the lives of patients with many advanced cancers, including cancers in the lung, head and neck, colorectal, breast, bladder and pancreas. While these targeted therapy drugs are highly effective at keeping the cancer at bay, they can cause patients to develop acneiform lesions, a type of skin rash that looks like acne bumps and frequently leads to impaired quality of life and drug discontinuation.

Between 75% to 90% of patients on this treatment suffer from acneiform rash, and there is currently no FDA approved treatment for this side effect.

“A majority of patients with advanced colorectal cancer are treated with these types of drugs at some point in their treatment,” said study co-author Dr. Zev Wainberg, associate professor of medicine at the David Geffen School of Medicine at UCLA and director of the early phase clinical research program at the Jonsson Cancer Center. “And when patients experience this type of difficult rash — which is very common — we have very limited options other than antibiotics, decreasing the dosage or discontinuing the treatment altogether.”

In order to eliminate the rash, researchers looked to BRAF inhibitors, a relatively new cancer therapy used to treat melanoma. In the laboratory, UCLA researchers discovered that BRAF inhibitors could also be used to help speed up how the skin repairs itself from injury and lessen skin-related side effects.

BRAF inhibitors given in pill form work by blocking a mutated gene found most commonly in melanoma, which rapidly shrinks the tumors. This can also set off a cellular cascade in other skin cells in a process called paradoxical MAPK activation, which lead to increased signaling and proliferation.

A team at Lutris-Pharma working with Dr. Antoni Ribas, professor of medicine and director of the tumor immunology program at the Jonsson Cancer Center, developed a topical BRAF inhibitor that can be applied directly on the skin, called LUT014. They found in laboratory models that the therapy induces paradoxical MAPK activation of skin cells and offsets the negative effects of EGFR inhibitors. The cancer is being inhibited by the EGFR inhibitor, but the cream is letting the skin go back to normal by activating this pathway, said Ribas.

“It’s a new, original idea to address the more common toxicity from the class of drugs that have improved the treatment of patients with colorectal cancer,” said Ribas, who is also the senior author on the study. “We saw a dramatic improvement using BRAF inhibitors in the laboratory and hoped it might improve the EGFR inhibitor-induced rashes in patients.”

To test the topical administration of LUT014, researchers enrolled 10 patients with metastatic colorectal carcinoma who developed grade 1 or 2 skin rash (with grade 2 being worse) while on therapy with EGFR inhibitors cetuximab or panitumumab. They were separated into three different cohorts with dosages of 0.3, 1 or 2.5 mg/g of LUT014 and were treated for 28 days.

Overall, 6 out of the 10 patients showed a reduction in severity of the rash and the improvements were maintained a month after treatment. The lower dosages of the treatment fared better than the higher dose. No dose limiting adverse effects were noted.

“Until now, we haven’t had any original solutions to really address these common, painful rashes,” said Wainberg, who is also the co-director of the UCLA gastrointestinal oncology program. “This study demonstrated that you can eliminate the rash in a more logical and mechanistic way.”

The study was published in Cancer Discovery, a journal of the American Association for Cancer Research.

The next phase of the trial, conducted by Lutris-Pharma is designed to include nearly 120 patients in center across the U.S. and Israel. Interim results are expected by the end of 2021.

LUT014 is developed by Lutris-Pharma, a clinical stage biopharmaceutical company focusing on topical therapies for reducing dose limiting side effects of cancer agents.

Ribas is the founder and director at Lutris-Pharma.