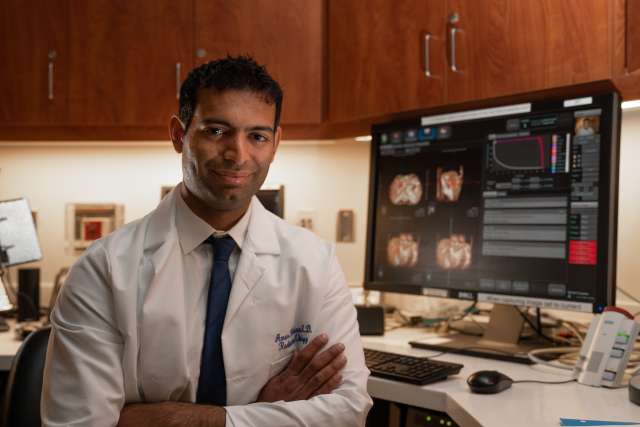 UCLA Jonsson Comprehensive Cancer Center researcher Amar Kishan, MD, associate professor in the department of Radiation Oncology at UCLA Health, has received a $1.15 million grant from the Department of Defense (DoD) to spearhead a project that explores important basic science concepts in the treatment of prostate cancer: evaluating and optimizing the physics of radiation delivery and dissecting the biology of the tumoral response to radiation.

Prostate cancer is the most common non-skin cancer among American men, with over 190,000 new cases diagnosed every year. While radiation treatment offers a high chance of cure, radiation’s impact on the urinary system has remained a challenge to minimize, as the prostatic urethra and the trigone (part of the bladder neck) are difficult for clinicians to visualize and can change shape or position frequently during radiotherapy. Meanwhile, a substantial minority of men have a poor response to radiation, with the cancer not responding or the disease recurring years later. Though radiorecurrent prostate cancer is common, it remains poorly understood in large part because the biology of the radiation response (and thus mechanisms of radioresistance) are unclear. This is critically important: local failure after radiotherapy is a poor prognostic marker and can portend a very aggressive disease course.

With the new grant, Dr. Kishan –under the mentorship of Jonsson Comprehensive Cancer Center members Dr. Ke Sheng in the Department of Radiation Oncology and Dr. Paul Boutros, director of Cancer Data Science, will evaluate two separate-but-linked hypotheses. The first is that by allowing real-time adjustments of radiotherapy dose delivery based on changes in the shape and position of the urethra and trigone, clinicians can significantly decrease the proportion of patients in whom these structures are overdosed during radiotherapy. The second hypothesis is that by evaluating the genome of patients with viable or visible tumor two years after radiotherapy, the group will identify a significant increase in markers of aggressiveness.

“This project will have a major impact by improving radiotherapy delivery technology and enhancing our understanding of the underlying biology of radioresistance,”said Dr. Kishan. “This work will be directly responsive to three of the DoD’s Prostate Cancer Research Program Overarching Challenges: improving quality of life to enhance outcomes and overall wellness for those impacted by prostate cancer, developing treatments that improve outcomes for men with lethal prostate cancer, and defining the biology of lethal prostate cancer to reduce death. This work will address multiple important gaps in our understanding of prostate cancer and will lead to high impact findings.”