Lives You Save: Patient Stories

Family thanks eight strangers who saved their young son’s life

“Thank you for saving our boy.”

Devra Schwartz, and her husband, Jeff, recently had a chance to express their gratitude to eight of the 100 strangers whose blood donations provided a lifeline for their son, Judah, now 4. The Santa Monica youngster nearly died last year when his kidneys failed due to foodborne E. coli infection.

Father of two thanks blood donors who saved his life

"Because you showed up and donated, my parents still have a son," Bacon said. "My children have a dad. My wife has a husband."

It took a team of UCLA medical professionals and the generosity of 71 strangers to save 2-year-old Skye Savren-McCormick’s life.

The toddler from Ventura, California, required frequent blood and platelet transfusions, often on a daily basis, while undergoing three grueling bone-marrow transplants, surgery to remove her swollen spleen and seven rounds of chemotherapy for leukemia and lymphoma. She received 77 units of blood and platelets during a 10-month stay at UCLA Mattel Children’s Hospital.

Jorge Sincuir, a frequent donor at the UCLA Blood & Platelet Center, who found himself in need of multiple blood transfusions following a near-fatal car accident.

As UCLA undergraduates, brothers Jorge and Andrew Sincuir donated blood and platelets often. In fact, after Andrew learned that a patient responded well to his platelets, he began donating every two weeks, racking up 67 donations over four years.

On January 30, 2015 Brandon received the rare opportunity to meet with 40 of the people who helped saved his life through blood donations. Brandon nearly died in a motorcycle accident on April 27th and in efforts to save him received over 200 units of blood products. During the event, Brandon was able to share his story with the donors that helped save his life and personally thank them by saying "...a part of you is inside of me and that's why I'm standing here today."

Due to confidentiality laws, most blood donors never know who receives their blood. Similarly, patients never learn the identities of those who donated their time and blood to save their lives. But a rare reunion organized by the UCLA Blood and Platelet Center changed that. A young mother who nearly died from massive bleeding after giving birth to her premature son was able to meet seven blood and platelet donors who sustained her life with their generous donations.

On January 31, 2014, Jennifer expressed her gratitude for the 24 units of donated blood, plasma and platelets that preserved her life — and allowed her sons to have their mother. Jennifer suffered uterine hemorrhaging after a high-risk cesarean section at Ronald Reagan UCLA Medical Center in April 2013. Only 5-feet tall, she lost five liters of blood — nearly her entire supply — and was hospitalized at UCLA for two weeks, with two days in intensive care. 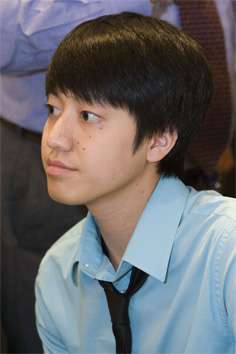 "Thank you for saving my life"

Ho, 17, of Orange, Calif., will express his gratitude for the 72 units of donated blood, plasma and platelets that helped make his 2010 organ transplant successful after his heart failed. Accompanied by his 10-year-old brother, parents, grandparents and great-grandmother, he'll also encourage more people to donate blood and platelets for patients requiring lifesaving transfusions due to organ transplants, cancer, trauma and heart surgery.

It is unusual for donors to meet the recipient because of confidentiality laws. The UCLA Blood & Platelet Center made it possible after an extensive series of consent forms for the donors and the recipient. The annual event emphasizes the impact blood and platelet donors make each time they donate. 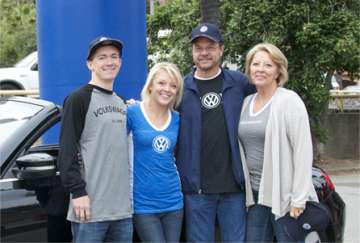 Twenty-one year old college student Jennifer Golden from Las Vegas, Nevada received 24 units of blood products during her double lung and liver transplant surgery. Jennifer was diagnosed at 5 months old with cystic fibrosis, which affected her lungs and deteriorated her liver. At the time Jennifer received the transplant, her lung capacity was at 12% and she was constantly coughing and having to catch her breath. The 13 hour surgery performed at the UCLA Ronald Reagan Medical Center in 2011 was a success. During an interview, Jennifer was asked what she planned to do in the future and she answered "...I never really got a chance to think about what I wanted to do. It was always day by day. Now I can think about a future." 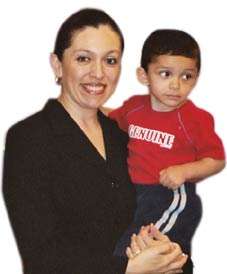 "Because of a rare form of anemia that my 3 year old son has, he needs blood transfusions every two to three weeks in order to survive.

So I urge you... make that call, make the time and donate blood. It doesn't cost a thing and it's worth more than all the money in the world - It's the gift of life and you can give it." 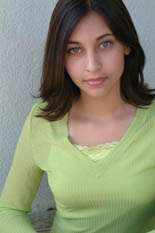 "You don't know how important donating blood is until you're sick." That's what Alyssa Gomez tells people and she knows it's true. In the fall of 2004, Alyssa was diagnosed with leukemia and her treatment requires that she receive both whole blood and platelets. Thanks to everyone who donated at the UCLA blood drive for Alyssa at Canterbury Elementary School and, thanks to many UCLA Blood & Platelet Center donors, Alyssa is getting the treatment she needs.

"We're proud to be a part of Alyssa's team, helping provide community support so that Alyssa, with her amazing attitude and big smile, will be able to do all the things a 9th grader wants to do: dance, act, model and enjoy the company of her good friends and loving family. You became part of Alyssa's Team, a team that included doctors, nurses, family and friends and now you!"

"When the third of my three consecutive bone marrow transplants worked, I didn't know who was happier, me or the nearly 80 people who came into the UCLA Blood & Platelet Center and donated blood and platelets for me. Almost daily, for the entire three months that I was a patient at UCLA my friends, my family, and/or my fellow officers from the Beverly Hills Police Department came into the donor center to donate. Without fail, their experiences were fantastic.

Their time constraints were accommodated and any scheduling issues were handled. Even today, 4 years later, many of them still donate; and they do because they believe it's just the right thing to do. When people talk about donating as giving The Gift of Life they mean it. The more than 184 units of blood, platelets, and plasma I received helped save mine."

Lauren Larsen became a multi-gallon blood recipient during the near-fatal birth of her only child. Several of her actual blood donors talk about what it was like to meet Lauren-and her family-in person four years after helping to save her life. This narrative underscores the direct connection between blood donors and the people whose lives they impact. This blood donation advocacy video was produced by In The Telling with educational funding from Johnson & Johnson.