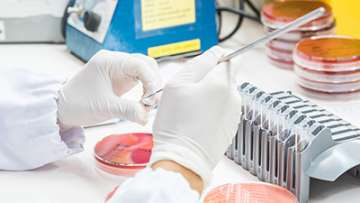 Sepsis can be defined as the body’s response to an infection. An infection is caused by microorganisms or “germs” (usually bacteria) invading the body, and can be limited to a particular body region (eg. open wound) or can be widespread in the bloodstream (often called “septicemia” or “blood poisoning”). Sepsis is a medical emergency just like a heart attack or stroke because there is an interruption of oxygen and nutrients to the tissues and vital organs such as the brain, intestines, liver, kidneys and lungs. 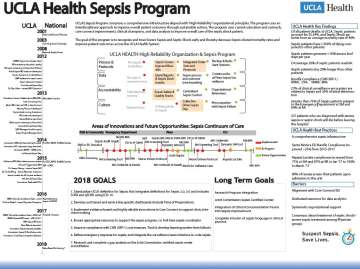 At UCLA we place a strong importance on the early recognition and treatment of Sepsis. We have developed a multidisciplinary team to lead the system-wide implementation of a sepsis screening assessment, which helps identify those patients who show signs of Severe Sepsis and/or Septic Shock.  The Core Measure CMS Bundle Compliance elements are rapidly implemented to treat a patient who has screened positive for Severe Sepsis and/or Septic Shock.

The goal of the UCLA Health Sepsis Initiative is early recognition and treatment of Sepsis, Severe Sepsis, and Septic Shock through the use of the sepsis assessment screen and the implementation of the Early Management Bundle for Severe Sepsis/Septic Shock. The objective is to reduce sepsis related mortality rates and improve patient outcomes across the UCLA Health System.