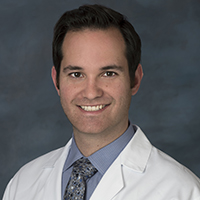 Dr. Richard Everson specializes in neurosurgical oncology, the treatment of benign and malignant tumors of the brain, spine, and skull base. He practices at Ronald Reagan UCLA Medical Center in Westwood and at Harbor-UCLA Medical Center in Torrance. He is an assistant professor of neurosurgery at the David Geffen School of Medicine at UCLA.

Dr. Everson was recruited to UCLA to provide expertise in complex surgery for tumors affecting the central nervous system. He employs the full spectrum of neurosurgical techniques to ensure that tumors are removed as completely and safely as possible. He offers the strategic use of minimally invasive, laser ablation, image-guidance, endoscopic, microsurgery, awake brain mapping, conventional-open and reconstruction techniques.

As a member of the UCLA Brain Tumor Center, Dr. Everson collaborates with other UCLA experts in the fields of neuroradiology, neuropathology, radiation-oncology, neuropsychology, basic and translation science, neuro-rehabilitation and care coordination to offer the world’s most advanced treatment options for patients suffering from central nervous system tumors. Unique at UCLA, Dr. Everson possesses an advanced fellowship training from MD Anderson Cancer Center which provides him with the insight of how to best combine surgery as part of a comprehensive care plan for neuro-oncology patients who may require combination therapies such as chemotherapy or radiation. His involvement in laboratory science allows him to be a co-investigator on several active clinical trials and translate information learned "from bench to bedside" and back again.

Dr. Everson developed his interest in neurosurgery during his undergraduate studies at the University of Michigan where his thesis on central nervous system regeneration earned him honors for his degree in molecular biology. His long-standing interest in brain tumor immunotherapy began as a medical student at Duke University. There, he worked under the mentorship of Drs. Matthias Gromeier and John Sampson to identify the mechanisms governing the ability of the oncolytic polio virus (now in clinical trials) to selectively kill tumor cells as well as to identify ideal immunotherapy targets for cancer vaccines, respectively. He was awarded the prestigious Eugene A. Stead scholarship for these research efforts.

During his neurosurgical residency at UCLA, Dr. Everson continued his research in brain tumor immunotherapy with Drs. Linda Liau and Robert Prins where he helped conduct clinical trials of dendritic cell vaccines and advance engineered T-cell immunotherapy for CNS tumors. He received multiple grants and awards including the NIH R25, AANS NREF, and JCCC Seed Grant. Dr. Everson has been invited to and presented his research findings at numerous scientific society meetings nationally. Since becoming faculty at UCLA, he has continued to advance care for patients both in the operating room and by continuing laboratory investigations to develop next-generation immunotherapy treatments for central nervous system cancers.

Dr. Everson has been named to the Southern California Super Doctors® Rising Stars 2019 and 2020 lists.

Dr. Everson's research is focused on:

Richard G. Everson, MD click here to update your profile
Back to search