Combination Therapy Leads to a New Approach to Brain Cancer 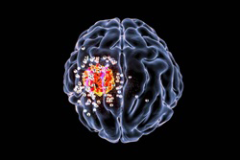 An orthogonal approach may lead to a new strategy to treat brain cancer. Glioblastoma (also known as “GBM”), the most common primary brain tumor, is a fast-growing cancer that that is usually fatal. Less than 5% of patients survive 5 years following diagnosis. Survival rates for patients with GBM have shown no notable improvement in population statistics in the last three decades. Scientific research into new treatments for GBM has been intense, with findings in brain cancer tumor receptors and brain cancer cell death mechanisms. These findings generated great excitement each time that they occurred, that there might be a “magic bullet” for GBM. If a drug could target a brain cancer receptor that is unique to the tumor, then this therapy might kill the cancer and not produce many side effects. However, the brain cancer mutates, and develops resistance so that each new possible therapy has not produced a change in life expectancy.

If a combination therapy could be developed, that attacks brain cancer from completely different directions, then there might be an effective way to kill brain cancer cells. In other words, if a treatment approach could be orthogonal, where two drugs come together from non-overlapping directions, this might provide a better way forward.

Enter Dr. Tim Cloughesy and Dr. David Nathanson at UCLA. These two neurologists and neuroscientists found that treatment of GBM with a brain cancer receptor blocker produced only a limited effect. This receptor is the epidermal growth factor receptor (“EGFR”), and a mutation in this receptor causes a substantial amount of GBM and other cancers. Blockers of EGFR were a hoped-for magic bullet several years ago. Cloughesy and Nathanson discovered that the cancer cells just switched gears and dodged the main effect of the EGFR treatment. However, when these cells switched gears, the UCLA team discovered that they became vulnerable to a second, unrelated approach. After treatment with EFGR inhibitors, Cloughesy, Nathanson and their team found that GBM could be effectively killed by promoting function of a second, previously unrecognized system, which acted when the EGFR inhibitors came together with this second approach (termed a “p53 activator”). In a further important finding, the vulnerability of a GBM tumor to this orthogonal treatment strategy can be determined by a brain scan, a PET scan. This serves as a biomarker for possible treatment of patients with GBM. Their paper was published in the influential journal Nature Medicine.

This work sparked an intense effort to develop a clinical trial for patients with GBM, an orthogonal cancer treatment. In this approach, orthogonal studies developed two distinct and complementary ways to treat brain cancer.

Next Story: Brain Repair in Patients and Mice—a Clinical Trial