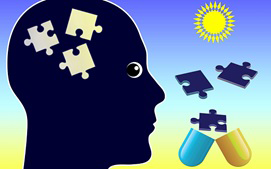 Dementia has been a hard nut to crack. Yet our ability to understand the biology of brain deterioration in Alzheimer’s disease and other forms of dementia is unprecedented. The scientific field has used advanced studies of the genome, sophisticated animal models, newly developed human stem cell models of dementia, and truly global human cohorts of patients with dementia. Still, there have been repeated failures in clinical trials that have come from this impressive pipeline of research. That may be changing.

Dr. Dan Geschwind and colleagues in UCLA Neurology and the Semel Institute for Neuroscience and Human Behavior recognized these failures, and turned to orthogonal studies of dementia biology to identify new directions for therapies.

Dr. Geschwind used multiple independent ways to identify molecules that underlie brain degeneration. His group then identified where these independent methods of investigation provide data that arrive at the same conclusions—the same molecules that pop up in each method. These results, published in an important paper in the high impact journal Nature Medicine, used an approach that is fundamentally grounded in orthogonal studies: systems biology. In systems biology, investigators use data from multiple sources that cross disciplines (human genetics, mouse disease models, cell culture experiments) and intersect this data to weed out the less significant findings and bring forth only those findings that come out through many different types of studies. In this approach, Dr. Geschwind and colleagues used multiple mouse models of dementia, multiple “-omics” approaches (such as transcriptomics in studies of the genome and proteomics in studies of the cell’s proteins), genetics from human dementia, and then separately tested a distinct cohort of patients with dementia. They write:

“In functional genomic studies, each experimental system on its own, whether in vitro systems, in vivo mouse models or postmortem human tissue, has significant limitations. In this study, we show how a multistage systems biology analysis coupled with substantial in vitro experimental validation provides a framework for discovery of new disease mechanisms and therapeutic targets. We leverage the benefits of animal models of human disease, which permit the temporal assessment of changes before substantial atrophy and cell loss while mitigating the potential bias introduced by a single genetic background.”

This approach identified modules of disease molecules—groups of molecules that together go up or down in the very early stages of brain cells with dementia in humans and in mouse models. This concept of modules is important. There is not one specific gene that drives dementia, but instead it is a collection of genes that are turned on or off that interact to produce dementia: a gene network.

One of the ways that the body coordinates a module of genes—regulates whether many genes are active or not at the same time—is using micro RNA. Dr. Geschwind’s group identified a new microRNA that drives the early stages of brain degeneration in dementia, and because of advances in gene therapy this may be a promising new drug target to explore in patients. In this approach, orthogonal studies identified a new molecular system in dementia that led to a drug target for a therapy.

Next Story: Combination Therapy Leads to a New Approach to Brain Cancer