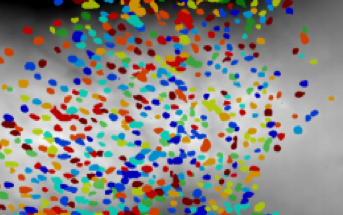 Dr. Peyman Golshani, Associate Professor of Neurology, and collaborators are peering down onto memory circuits in mouse models of epilepsy using new miniaturized microscopes.  Individuals with temporal lobe epilepsy have poor memory. Finding treatments for memory deficits is a major goal of the Golshani Lab. The researchers are taking advantage of new proteins that when expressed in brain cells allow them to flash brightly when they become active.

These new microscopes can show the activity of up to a thousand brain cells simultaneously in mice that are free to go about their usual activity patterns. Dr. Daniel Aharoni, Dr. Golshani’s collaborator, has designed new generation microscopes that expand the capabilities of these microscopes. One great advance has been a new wireless microscope that allow the mice to travel freely while undergoing brain imaging.

This allows imaging of large groups of animals as they navigate naturalistic environments, laying down or retrieving memories.  In this manner, Dr. Golshani’s laboratory will identify groups of neurons that become activated during spatial navigation and decision making, with the hope of being to stimulate these specific cells at a later time using real-time feedback.

Importantly, Dr. Golshani and collaborators are sharing these microscopes with the neuroscience community internationally, and over 300 labs are now building these microscopes at very low cost.  His group has taught workshops both at UCLA and in Europe, teaching groups of investigators how to assemble, implant the microscopes and analyze the large volume of data generated. The microscopes are being used in colleges and even high schools as teaching tools for students.

Dr. Golshani’s group will use these microscopes on multiple different models of epilepsy, including a model Duplication 15q Syndrome, a common cause of epilepsy and intellectual disability in patients.  His group hopes to discover hubs, center of brain cell networks, that are critical for seizure generation, laying down new memories, and making decisions based on past information.  By discovering new drugs or brain stimulation regimes that can modulate a small group of powerful hub cells that control each behavior, they hope to  improve cognitive function and reduce seizures.