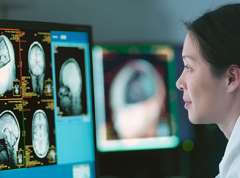 What if UCLA scientists could enhance the brain’s ability to fight the slow degeneration that occurs in Parkinson’s disease? Parkinson’s disease is a progressive degeneration of brain systems that control movement. Patients experience a slowing of their ability to start movements, tremor or shaking at rest, and an increase in falls. What many people don’t know is that Parkinson’s disease actually affects many different functions and leads to increased rates of depression and dementia. Neurology physicians at UCLA work long hours to care for patients with Parkinson’s and to treat their symptoms. Some patients have a much slower progression of their disease than others. These patients’ brains appear to be more resilient in the face of the attack of the disease. What if the mechanisms behind this resilience could be identified and stimulated to help patients fight the disorder?

Drs. Jeff Bronstein and Beate Ritz are doing such a study. They are using advanced DNA sequencing to identify genes that are associated with this slowdown in brain damage and disease progression. This study is unique in that it is a collaboration between a neurologist and an epidemiologist to develop methods of determining environmental exposures that appear to not only increase one’s risk of getting Parkinson’s disease, but also may help determine the rate of progression. The goal is to study how these genes and environmental factors act on a molecular level, so that new drugs can be developed that will slow or halt the progression of cell death.

By studying brain resilience in patients, UCLA Neurology has a goal to stop brain degeneration. Ten years ago, patients were treated with drugs that helped mitigate slow movement, but did nothing to stop the disease. UCLA’s goal is to develop therapies that stop disease progression and have them available within 10 years from now.