At UCLA Health, we are proud to offer radiofrequency ablation (RFA) for the treatment of a number of thyroid conditions.

The UCLA Thyroid RFA Program is a collaboration between UCLA interventional radiology, endocrinology, and endocrine surgery to provide this state-of-the-art treatment to our patients. Our interventional radiologists, Dr. David Lu and Dr. Michael Douek have extensive experience in thermal ablation procedures. UCLA performs more than 500 thermal ablation procedures annually in different organs throughout the body.

RFA is a minimally invasive treatment option performed by interventional radiology that is an alternative to surgery in some patients with thyroid nodules.  During this procedure a small needle electrode is inserted into the thyroid nodule using ultrasound guidance.  Heat generated at the needle tip destroys the target tissue. 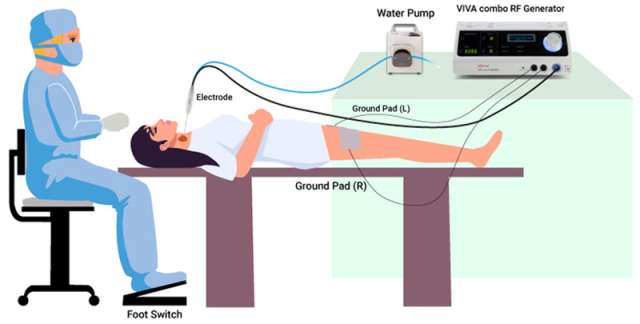 What are the indications for RFA of thyroid nodules?

Other indications include the treatment of autonomously functioning thyroid nodules as an alternative to surgery or radioactive iodine.

In certain circumstances, small primary thyroid or recurrent thyroid cancers, which are not located near critical structures, can be treated with RFA in patients who prefer to avoid surgery or who are not good surgical candidates due to other comorbid medical conditions. Whether RFA is an appropriate treatment is determined on a case-by-case basis by your multidisciplinary team of doctors.

What are the contraindications to RFA?

Pregnant patients and patients with cardiac pacemakers should not undergo RFA.

You may also not be a candidate for RFA if your thyroid nodule is close to critical structures such as the nerve to the vocal cord, esophagus, or major blood vessels.

What is the procedure like?  What about the recovery?

Thyroid RFA is routinely performed as an outpatient procedure, typically with local anesthetic only (though some patients may prefer to receive a mild sedative). The procedure typically lasts approximately one hour, depending on the size of the nodule being treated. Patients leave the procedure suite the same day with only a small bandage.  After the procedure some patients experience minor discomfort and bruising which may be treated with over-the-counter pain medications.  There is no scar from the procedure.

Is RFA a safe procedure?

All procedures have risks and these will be discussed with you in detail by your doctor.  In experienced hands, thyroid RFA is considered to be a safe procedure.

How does RFA compare to laser, cryo (freezing), or ethanol ablation?

These are all minimally invasive methods of destroying tissue. For solid or complex thyroid nodules, RFA is generally considered superior to these other methods of treatment. The exception is for most cystic, or fluid-filled, nodules, for which ethanol ablation is a good option.

What can I expect after the procedure?

For benign nodules, when the primary goal is to reduce the size of the nodule, patients usually notice a reduction in size approximately one month after the procedure. This shrinkage will continue with time until the nodule is significantly smaller. However, we do not expect 100% resolution of the nodule. The goal is to treat these nodules in a single RFA session, however very large nodules, or nodules not well controlled with one treatment may require additional RFA treatments to achieve optimal size reduction.

For malignant nodules or lymph nodes, your multidisciplinary treatment team (endocrinologist, endocrine surgeon, radiologist) will monitor the tumor over time, to ensure the cancerous tissue has been fully treated.

Will I have to take thyroid medication after thyroid RFA?

One of the main advantages of thyroid RFA is that the procedure does not affect the function of the remaining thyroid gland.  Therefore patients undergoing thyroid RFA typically do not need to take thyroid replacement medication as a result of the procedure.

How can I be evaluated to see if I am a candidate for thyroid RFA?

Patients interested in RFA will be evaluated by a multidisciplinary group of doctors, including a radiologist, an endocrinologist, and an endocrine surgeon to evaluate whether RFA is the best management option for you.