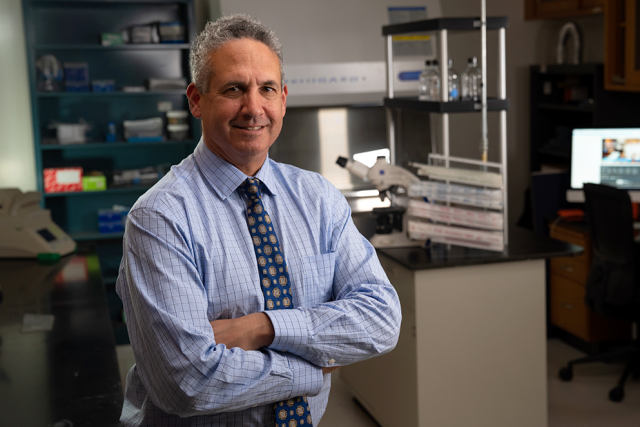 By the time Robert Harris started cancer treatment at UCLA Health, a tumor had encroached more than half his liver, leaving him fatigued and in pain.

In June, Harris, 85, was among the first patients to receive a new combination medication for advanced liver cancer after the therapy was approved a month earlier by the Food and Drug Administration. About six months later, his tumor has shrunk by at least 25%.

While Harris has been awed by his response to the treatment, his oncologist, Richard Finn, MD, co-director of the Signal Transduction and Therapeutics Program at the UCLA Jonsson Comprehensive Cancer Center, already had firsthand knowledge of the drugs’ benefits.

Finn led the clinical trial that resulted in FDA approval of atezolizumab and bevacizumab, which was described in a New England Journal of Medicine editorial as “the new benchmark” for first-line treatment of advanced hepatocellular carcinoma, the most common type of liver cancer.

“The recent approval is probably the biggest landmark in liver cancer for over a decade,” Dr. Finn said. “We’re improving survival. It shrinks tumors with a good response rate. It’s well tolerated and improves quality of life.”

Year after year, the UCLA Jonsson Comprehensive Cancer Center is a powerhouse for FDA approvals that drive better outcomes for patients around the world, said the center’s director, Michael Teitell, MD, PhD. 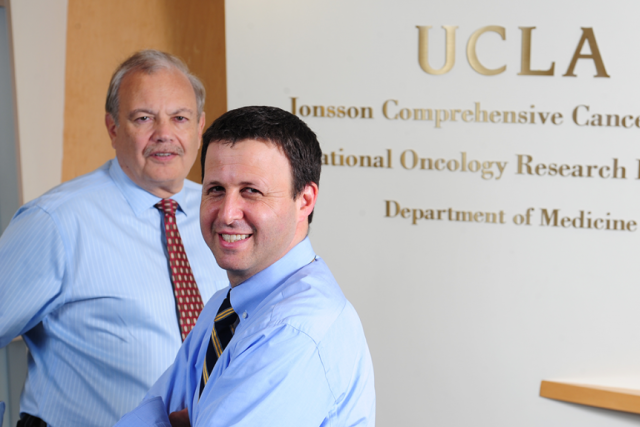 UCLA’s research has culminated in blockbuster drugs such as trastuzumab (Herceptin) for HER-2 positive breast cancer. The drug, approved by the FDA in 1998, was developed by Dr. Dennis Slamon along with colleagues from Genentech and has been used to treat up to 3 million women worldwide.

UCLA also has been a leader in bringing game-changing immunotherapies to market, such as with the highly anticipated 2014 approval of pembrolizumab (Keytruda) for metastatic melanoma led and co-developed by Dr. Antoni Ribas, director of the Tumor Immunology Program at UCLA’s Cancer Center.

This year, the FDA has approved three cancer therapies for which UCLA served as the lead research institution and another three where UCLA played a central role in the process. A seventh approval came Dec. 1 for prostate-specific membrane antigen PET/CT imaging to detect recurrence of prostate cancer. The trial was co-led with UCSF.

“When UCLA is the lead institution or plays a major role on a study that results in an FDA approval, it is a big deal because it represents years of research from dedicated scientists and scientist-physicians,” Dr. Teitell said. “It’s just a repeated set of great discoveries and advances that make their way into patients. This is what we do here. This is our mission. We do it pound for pound as well as any place in the world.”

A new standard of care

Liver cancer is one of the leading causes of cancer deaths worldwide. In the U.S., liver cancer is a less common form of cancer, but according to the American Cancer Society incidence rates have more than tripled since 1980 and the death rate has more than doubled.

Asian Americans are the most likely of any ethnic group to develop liver cancer, contributing to Los Angeles County having one of the highest rates of liver cancer in the nation.

Dr. Finn, a professor of medicine at the David Geffen School of Medicine at UCLA, said the disease is hard to treat and progress has been incremental. But in late May, the FDA approved the combination of atezolizumab (Tecentriq), which activates the immune system, and bevacizumab (Avastin), which starves tumors of a blood supply.

The therapy was approved for patients with metastatic or inoperable hepatocellular carcinoma.

Dr. Finn said the clinical trial found a42% decrease in the risk of death for patients who took the combination treatments vs. the standard medication, sorafenib (Nexavar). More than 27% of patients had tumors shrink while about 5.5% saw them completely disappear.

“That’s new in liver cancer where we have such a high response rate,” Dr. Finn said. “Now we have patients coming in with pain, they get this drug combination, they feel better, their liver function improves and they’re more active. To see this is quite striking.”

Harris, a retired Los Angeles business owner who asked to be identified by only his first and middle name, said he went in for a routine physical in April when his internist told him he looked jaundiced. Testing revealed the tumor.

“They said it was a very large liver cancer and it could have been terminal relatively quick,” Harris said. “I had no idea.”

“He very quickly started improving,” Dr. Finn said. “With his treatment and response, his liver function is normalizing. He is gaining weight, no pain, more energy and no real side effects from treatment.”

Harris, a married grandfather of six, receives a one-hour infusion every three weeks. He’s able to tend his garden, spend time with his sons and talk on the phone to friends he’s known since grammar school.

“I’ve responded to the medication and I’m on my feet,” he said. “I feel good. I feel normal.”

Dr. Finn said Harris doesn’t have a predetermined course of therapy, but will continue for as long as his tumor responds and he tolerates the medication.

“As far as we know this is not a cure, but I think we are clearly going to help him live a lot longer with a higher quality of life than we would have expected without this treatment,” he said.

At least 80% of patients with advanced disease will be eligible for the combination as a first-line treatment, Dr. Finn said, making it the new standard of care for most.

“An FDA approval is a sign of practice change,” Dr. Finn said. “We are able to impact not only the people in Los Angeles, but nationally and globally.”

Dr. Teitell said UCLA’s reach is amplified by allowing patients across the country to enroll in UCLA Jonsson Comprehensive Cancer Center clinical trials through a nonprofit network called the TRIO-US Network (Translational Research in Oncology-US) that was started by Dr. Slamon and colleagues.

“That’s highly unique,” Dr. Teitell said. “These are independently owned and operated sites with a strong desire to have their patients gain access to and participate in UCLA Health run clinical trials. We also oversee their safety, protocols and reporting requirements.” 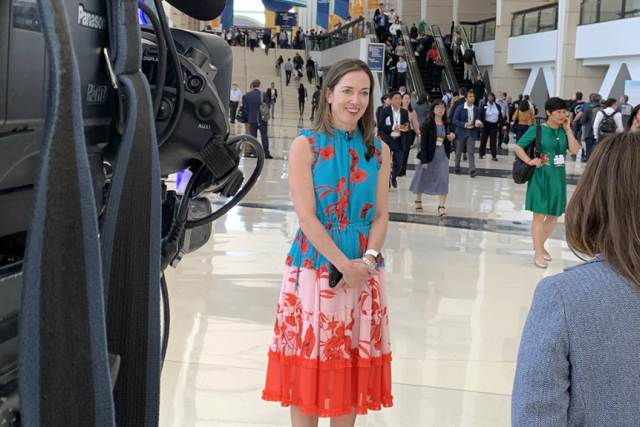 In granting approval, FDA officials noted the limited treatment options available for metastatic triple-negative breast cancer, which has been hard to treat and has a poor prognosis.

In May, the FDA approved two targeted therapies for advanced non-small cell lung cancer, based on research by Edward Garon, MD, co-director of the Signal Transduction and Therapeutics Program at UCLA’s Cancer Center.

It is the first targeted combination therapy for the roughly 10% of people with lung cancer with this mutation in the U.S., which is the most common mutation among patients who have never smoked.

The FDA also granted accelerated approval of capmatinib (Tabrecta), the first therapy for advanced lung cancer to target abnormalities in the MET gene. Dr. Garon was one of the lead researchers for that study as well. 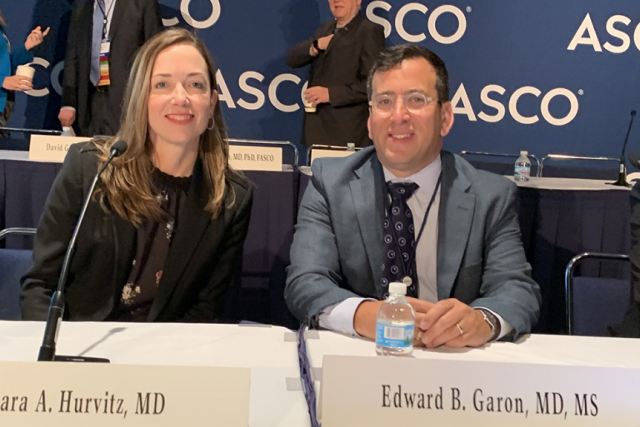 “The practice of medicine for me and my colleagues at UCLA, as well as the clinical research, in many respects go hand in hand,” said Dr. Garon, who is also a professor of medicine at the David Geffen School of Medicine at UCLA. “The patients want better therapies for themselves and for the community. They want greater scientific knowledge so it can inform the studies and practice that will make treatment better and better.”

May: Capmatinib (Tabrecta) to treat non-small-cell lung cancer by targeting abnormalities in the MET gene. Led by Dr. Edward Garon.

December: Prostate Specific Membrane Antigen PET imaging technique for prostate cancer that locates cancer lesions in the pelvic area and other parts of the body to which the tumors may have migrated. Led by Dr. Johannes Czernin and Dr. Jeremie Calais.