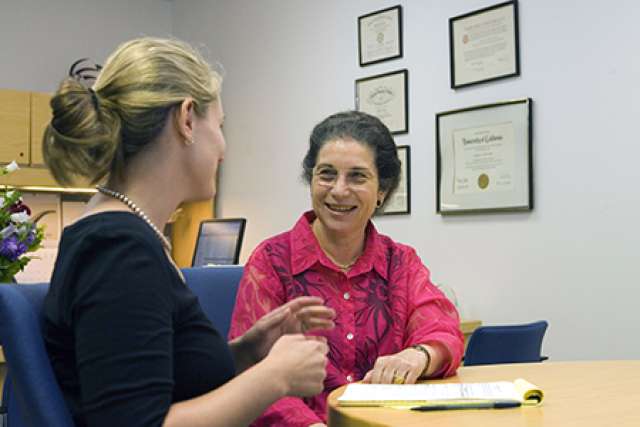 An intervention program designed to promote screening for colorectal cancer - and thereby decrease the number of cancers diagnosed - failed to increase screening rates in the managed care setting, a UCLA study has found.

During the two-year period monitored in the study, less than 30 percent of eligible patients received any screening for colorectal cancer in participating managed care practices, said Dr. Patricia Ganz, director of cancer prevention and control research at UCLA's Jonsson Cancer Center and the lead author of the study. The study will be published in the Nov. 15, 2005 issue of CANCER, a peer-reviewed journal of the American Cancer Society.

"Colorectal cancer screening rates are low," Ganz said. "We need to do better. Screening saves lives. With increased screening and removal of pre-cancerous polyps, doctors won't have the horrible task of telling their patients that they have colorectal cancer, a cancer that could easily have been prevented."

In the study, about half of the 32 managed care providers monitored were given a package of materials and administrative support designed to increase colorectal cancer screening, while the other half received nothing. Materials included tools and strategies to address and improve colorectal cancer screening practices. The intervention program was launched with a two-hour workshop that stressed the strategies and tools to leadership and staff at the individual practices, Ganz said. Additionally, UCLA research staff provided ongoing support to the practices, including newsletters and updates on educational resource materials targeting physicians and patients.

After two years, researchers reviewed 1,850 patient charts and found little difference in colorectal screening rates between managed care practices that received the intervention program and those that did not. Although large percentages of patients in the participating practices received mammograms (79.5 percent), pap smears (65 percent) and prostate specific antigen (PSA) tests (83.5 percent) to screen for cancers, only 26 percent received screening for colorectal cancer, which can be prevented, Ganz said.

Patients also must schedule regular physical examinations, instead of just seeing their doctors when they're ill. The study found that patients who scheduled regular physical exams were much more likely to have received colorectal cancer screening tests. However, of the 1,850 patient charts reviewed, less than half had been in for a routine physical in the last two years. Additionally, patients over 50 should be encouraged to request colorectal screening if the tests are not offered by their physicians, Ganz said.

Colorectal cancer is the third most common cause of cancer death in the United States, and is expected to claim 56,290 lives this year alone. Colorectal cancer patients first develop benign polyps, which can be found with sigmoidoscopy and colonoscopy and removed before the polyps develop into cancer.

"There's a real opportunity here to make a difference by successfully promoting colorectal cancer screening," Ganz said. "We can prevent this cancer if patients get screened."