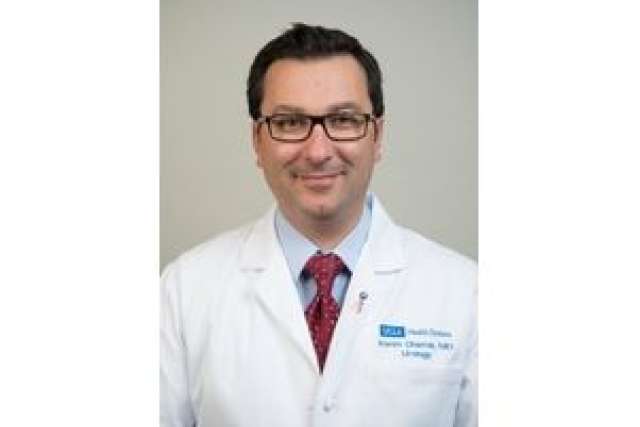 The two-year study found that about half of bladder cancer patients who were biopsied had insufficient material — meaning that no bladder wall muscle was retrieved — to accurately stage the cancer. Additionally, the UCLA research team found that a less-than-optimal biopsies and incorrect tumor staging were associated with a significant increase in deaths from bladder cancer, said the study’s first author, Dr. Karim Chamie, an assistant professor of urology and surgical director of the bladder cancer program at UCLA.

“These findings are very important because while patients know about the stage of their cancer, they rarely question the quality of the biopsy,” said Chamie, who also is a researcher at UCLA’s Jonsson Comprehensive Cancer Center. “We hope these findings will help empower patients to ask about the quality of their biopsy and, if it is suboptimal, then urge their doctors to repeat the biopsy prior to deciding on what type of treatment to prescribe.”

The findings were published in the early online edition of the peer-reviewed journal Cancer. The study was conducted at UCLA and the Cancer Surveillance Program at USC.

Chamie said that many times, biopsies only take tissue from the inner lining of the bladder itself, ignoring the underlying muscle wall. If the cancer has started to invade, tissue from the muscle wall needs to be examined to determine the next course of treatment.

For the study, the UCLA team reviewed biopsy and surgery reports of every person diagnosed with bladder cancer that was determined to be non-invasive — meaning that it had yet not spread into the muscle — during 2004 and 2005 across medical institutions in Los Angeles County.

The team found that about half the time, the surgeon either did not perform an adequate biopsy or the pathologist did not clearly state the extent of the cancer invasion. When patients had aggressive tumors and their surgeons and pathologists appropriately staged them, the chance of the patient dying of bladder cancer within five years was 8 percent.

If the surgeon did an inadequate job staging the tumors, but the pathologist alerted the physician of inadequate staging, the five-year mortality rate was 12 percent.

However, if the pathologist did not comment on the extent of the cancer invasion, then the five-year mortality was 19 percent.

“Appropriately staging patients with bladder cancer is a skill set that every urologist and pathologist should have in his or her armamentarium,” Chamie said. “We believe the next step is to change the staging system for bladder cancer to incorporate the quality of staging. Not all stage 1 cancers are alike. Some patients may have stage 2 cancer, but because the biopsy was insufficient, these patients were inaccurately staged and may be undertreated.

“I really do believe that one reason we have yet to see significant improvement in bladder cancer survival over the last two decades may, in part, be attributed to inadequate staging.”

Barbara James, 77, of Three Rivers in Central California was diagnosed with bladder cancer a year ago by an urologist in her area. The doctor also performed a biopsy and later removed the cancer but waited four months before going back to check whether all of the cancer had been removed, James said.

At that time, the doctor did find more cancer and wanted to go in and remove more.

“It made me really nervous. I felt like he didn’t know what he was doing,” she said. “I decided I needed to go somewhere else.”

A friend of James, a UCLA neurosurgeon, referred James to Chamie, who performed a more thorough biopsy. That test found that James had invasive bladder cancer that had been missed in the first biopsy. As a result, her bladder had to be removed and a new bladder built for her using a portion of her intestine. Now recovering, James advises anyone with bladder cancer to go to a major medical center for biopsy and staging.

Every year, nearly 75,000 Americans are diagnosed with bladder cancer, the vast majority with non-invasive disease. More than 15,500 die of the disease each year.

“The omission of muscle in the specimen or its mention in the pathology report in nearly half of all diagnostic resections is associated with increased mortality, particularly in patients with aggressive disease,” the study states. “Because urologists cannot reliably discern between aggressive and indolent disease, we recommend that patients with bladder cancer should undergo adequate muscle sampling at the time of biopsy.”

The study was funded by the National Cancer Institute; UCLA’s Jonsson Comprehensive Cancer Center; the Surveillance, Epidemiology, and End Results Program; and the STOP Cancer Foundation.