Funds from state’s stem cell agency will support research on a blinding eye disease, cancer and an immune disorder 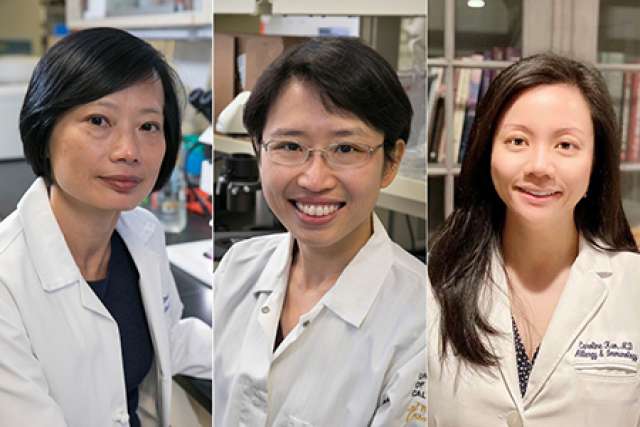 The recipients are Dr. Sophie Deng, professor of ophthalmology at the UCLA Stein Eye Institute; Yvonne Chen, a UCLA associate professor of microbiology, immunology and molecular genetics; and Dr. Caroline Kuo, a UCLA assistant clinical professor of pediatrics. The awards were announced at a CIRM meeting today.

Deng's four-year, $10.3 million award will fund a clinical trial for a blinding eye condition called limbal stem cell deficiency. Limbal stem cells are specialized stem cells in eye tissue that help maintain the health of the cornea. Because of genetic defects or injuries caused by infections, burns, surgeries or other factors, some people do not have enough limbal stem cells, which results in pain, corneal scarring and blindness.

The approach she is testing involves extracting a small number of limbal stem cells from a person's eye, multiplying them in a lab, and then transplanting them back into the eye, where they could regenerate the cornea and restore vision. The research will be conducted in collaboration with the UCLA–UCI Alpha Stem Cell Clinic, a partnership between UCLA and UC Irvine.

The grants awarded to Chen and Kuo are for projects that are heading toward the FDA's investigational new drug application process, which is required by the agency before a phase 1 clinical trial — the stage of testing that focuses on a treatment's safety.

Previous research has shown that the marker CS1 is present in around 90% of multiple myeloma cells. A CAR T therapy that targets both markers could potentially help more patients and reduce the likelihood of a cancer relapse.

The syndrome, which is caused by a mutation in the CD40LG gene, results in invasive infections of the liver, gastrointestinal tract and lungs. Currently, the only potential cure is a bone marrow transplant from a matched donor, which carries life-threatening risks and is often less effective for XHIM patients than patients with other forms of immune deficiency. Even with current treatments, only 30% of people with the syndrome live to age 30.

Kuo will evaluate a stem cell gene therapy that corrects the genetic mutation that causes XHIM. After removing blood-forming stem cells from a person with the syndrome, the therapy would use a genetic engineering technique called CRISPR to insert a correct copy of the affected gene into the DNA of the stem cells. The corrected blood-forming stem cells would be infused back into the patient, where they could regenerate a healthy immune system.

She will collaborate with Dr. Donald Kohn, a UCLA distinguished professor of microbiology, immunology and molecular genetics who has successfully treated two other immune deficiencies — bubble baby disease and X-linked chronic granulomatous disease — with a similar therapy.