A 'philosopher early on in life,' George Happe used his transplant experience to support other recipients. 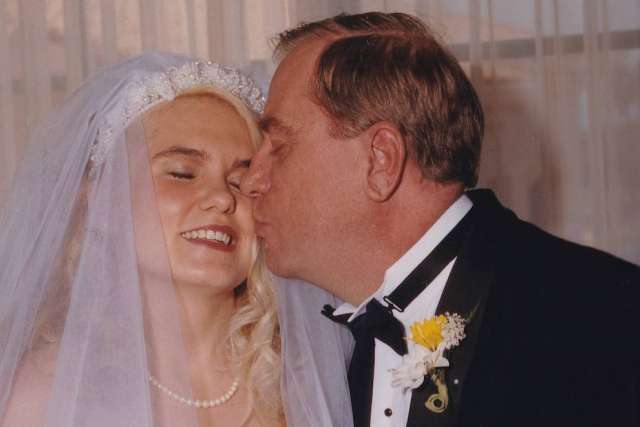 Photo: The late George Happe with his daughter Allison Ryan at her wedding. Happe was thought to be one of UCLA's longest-surviving transplant patients after receiving a new heart in 1985. (Handout photo courtesy Allison Ryan)

There are a few people who experience life as a long-term loan.

Even fewer make as much of their time as George Happe, who lived a remarkably satisfying and fruitful life 36 years after receiving a heart transplant at UCLA Medical Center – in 1985, when that procedure was still in its infancy.

Thought to be one of the hospital's longest-surviving heart-transplant recipients, Happe died at age 71 on Dec. 29, 2021, after battling metastasized bladder cancer. He is survived by two children and two grandchildren.

While living with his wife and children in Torrance in the ‘80s, Happe suffered from restrictive cardiomyopathy, a disease of the heart muscle. His health was in desperate decline.

His family and neighbors joined together to help raise $50,000 to cover the costs of what was, at the time, very nearly an experimental procedure at UCLA. The donor of his indefatigable heart was a 16-year-old girl killed in an automobile accident. Though transplant donors were then anonymous, Happe's wife ultimately located the girl's family. The couple would visit them on friendly terms.

Happe measured what was ultimately a full and lengthy life in small milestones, recalled Allison Ryan, his now 45-year-old daughter, in an interview. 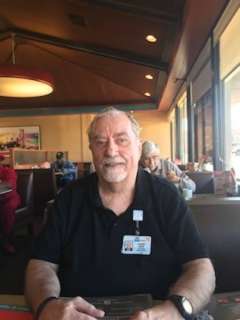 The late George Happe. Happe was thought to be one of UCLA's longest-surviving transplant patients after receiving a new heart in 1985. (Handout photo courtesy Allison Ryan)

A volunteer homeroom parent, he wanted to see his children graduate from school. He wanted to walk Alison down the aisle and, later, get to know his grandchildren. He relished the annual picnics with other transplant recipients and the UCLA doctors who took the day off to attend.

A self-described "daddy's girl," Ryan said she is particularly pleased with the time her father took to address civic groups about transplant procedures and to offer support to other recipients. His family and friends were inspired by the example of what he'd made of his borrowed time.

Thankful for having their father for so many years, Ryan and her brother, Eric Happe, credited the UCLA doctors who worked for nearly four decades to keep him healthy.

“The transplant not only gave my father more life, but it gave our entire family a whole new life,” Ryan said. “You just appreciate everything you have a little bit more.”

“He was basically considered very high risk, because he was in an advanced stage of his cardiomyopathy where his kidneys and liver – secondary to his heart failure – were already failing,” Dr. Deng said.

Happe, Dr. Deng said, was willing to take the risk of having the surgery so he could spend more years with his wife Diane (who died in 2015) and his children. In 1985, doctors estimated that he had only months left to live. When Happe was 12 years old, his father had died of the same condition.

“In a way, Mr. Happe was a philosopher early on in life, because he was dealing with his own mortality, with his father’s mortality, and out of that came a gratitude,” Deng said. “He was fully aware not only of his own mortality, but also about the importance of his wife and family.”

“He helped Lord knows how many hundreds of other people, by all the donor outreach and meetings and speaking engagements,” Eric Happe said. “He spoke all over the place. He’d go anywhere to talk about it.”

“We would always make little goals, him and I,” said Ryan. “He’d say, ‘I want to be there when you start high school,’ or, ‘I want to be there to teach you how to drive.’ Once we achieved that goal, we would set a new goal. One of the biggest was that he really wanted to walk me down the aisle when I got married.”

When Ryan got married at the age of 23, Happe was there to walk her down the aisle.

“He had this very big desire to live and do the things he wasn’t able to do before,” Ryan said.

Perhaps most fondly, Ryan likes to recall how she hosted her father for a regular Sunday dinner that became a kind of familial ceremony of good humor. Happe was fond of jokes and always brought a raft of new and corny stories to share with his grandchildren.

“I had him over for dinner every single Sunday,” Ryan said. “I was just very involved in his life. He was here all the time. He got to know his grandkids really well.”

As Happe’s cancer spread, doctors removed his bladder in November. “That’s kind of when we noticed the biggest decline both physically and mentally in him,” Ryan said.

After her father’s death, Ryan said, she made a very difficult call to the mother of the girl whose donated heart had kept Happe alive for so many years.

“He had a real bond with the family,” Eric Happe said.

Meeting the family of his donor helped them both, Ryan said. “They remained in very, very close contact all the way through,” she said. “In fact, that was one of the hardest phone calls I had to make."

But, even as his illness grew, her father “never talked too much about slowing down,” Ryan said. “He was just more of a positive person.”

She recalled, “Right before he passed away in the hospital, the UCLA transplant team came in and spoke with him and kind of said their goodbyes. And that meant so much to him.”

Learn more about the heart transplant program at UCLA Health.