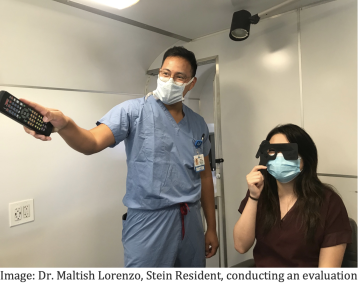 “Maria” has had diabetes for years but had poor insight about the need to manage her diet and taking oral medication. She got into frequent conflicts with family and caretaker believing that they were just being controlling rather than trying to help her manage her health. When Maria received the dilation test at the eye clinic, it helped her realize how her diabetes can be affecting her eyes. She was very happy to learn from the doctor that her eyes were not damaged because her diabetic condition has been under control. Maria reported now she knew why her family and caretakers have been monitoring her diet and vitals daily and was motivated to keep up with the routine to be more attentive to her physical health. “Kevin” reported his right eye being weak and nearly blind. Doctor noticed a scar in his eye, which affected his vision. Kevin reported the injury happened more than 40 years ago. He was physically assaulted during the Vietnam War. Kevin was not able to receive immediate care in Vietnam and did not have much access to continue seeking treatment once he came to the US. Kevin was excited to learn that his left eye was still in good condition to allow him to see and looked forward to getting the new pair of glasses to improve his vision. 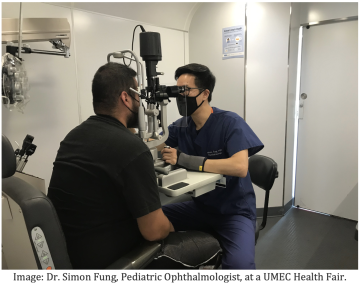 After 7 years, I can finally see……

I am writing this to acknowledge the good work of UCLA Mobile Eye Clinic. I am deeply touched by the genuine care of the optical team to our clients, going above and beyond their responsibilities to ensure our clients’ vision is not jeopardized by any barriers. Seven years ago, “David,” a newly immigrated client with language barrier and limited resources was diagnosed with diabetes. Due to his medical conditions, his vision was drastically impaired. David could not see clearly while driving and had much trouble reading newspapers. Because of multiple barriers and limited insurance coverage, David was never provided with the glasses he needed. On the day of the Mobile Eye Clinic visit, the optical team carefully examined David’s vision and provided professional suggestions. Due to David’s mental health background, he was having difficulties verbalizing his eye condition. However, the optical team patiently prompted him to do a thorough assessment and recommended a pair of bifocal glasses, which truly addressed David’s ongoing poor vision. David was beyond grateful. UCLA Mobile Eye Clinic showed true professionalism and provided compassionate services to the API population. We are beyond grateful for their service and dedication. 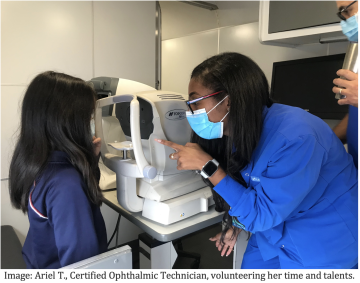 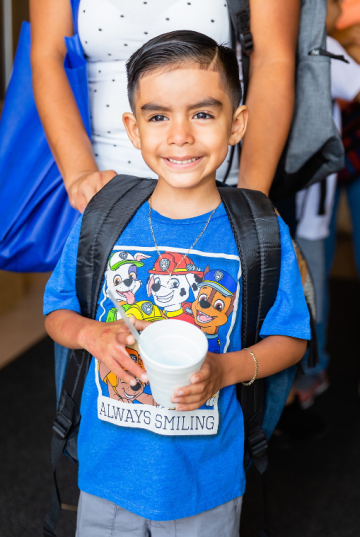 Jaden, a five-year-old boy attending the YMCA Montebello-Commerce Preschool was screened, examined, and given eyeglasses as part of the Child Vision Program sponsored by First Five LA. Before the UCLA Mobile Eye Clinic (UMEC) saw the boy at his preschool, his teachers and the principal were concerned that the boy may be autistic. As a result, they referred him for an Autism Diagnostic Observation Schedule (ADOS) assessment. Amongst other concerns, they were worried because Jaden did not speak in school for a whole year, was aggressive, and walked with his head down.

When UMEC came to Jaden’s school to provide the comprehensive eye examinations, Jaden’s father, a law enforcement agent, told our staff that his son would not allow eye drops to be administered in his eyes. Luckily, our experienced and empathetic pediatric ophthalmologist was able to get Jaden to agree to the eye drops. After the little boy was fully dilated, she proceeded with the eye exam and prescribed a pair of eyeglasses. Jaden’s eye examination revealed that he was severely Hyperopic and had a visual acuity of 20/200 on the right eye and 20/400 on the left eye, which may be considered legally blind. During the exam, he did not even want to take off the trial frames because he saw so well with them. His vision improved significantly with the eyeglasses. The best-corrected vision for Jaden was 20/30 on the right eye and 20/40 on the left eye, which is normal for a preschool-aged child.

We called the school after six months to check in on Jaden and they reported that the change in him is like night and day. Once the glasses were on, Jaden began talking almost immediately. As a result, he is so much happier now. He is doing better in school, is verbal, and is even playing with the other students. It is clear that Jaden’s new pair of eyeglasses has helped him overcome a variety of obstacles in his life.

We are fortunate to have formed hundreds of partnerships with schools and school districts across Los Angeles County over the past five years because of our grant and partnership with First Five LA. We receive recognition from many of these school districts and parents in the form of thank you cards, support letters, and certificates of appreciation. We also receive quotes like this one from Jenny Handy, Health Educator for Training and Research Foundation Head Start, “I wanted to take a moment to express my gratitude to you and all of your staff. It has been an absolute pleasure working with all of you. Because of you all, several children can now see the world a lot clearer and that makes my heart smile. I hope to continue this partnership for many years to come. See you all next school year.” 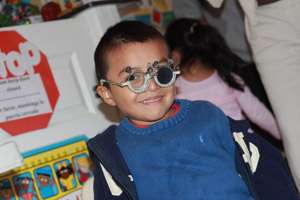 Gustavo, a five-year-old boy who lived and went to school in Compton, had chronic headaches, was depressed, and said he “hated school.”  The cause was found one day when a screening at the UCLA Mobile Eye Clinic revealed he required a simple vision correction that was accomplished with glasses. Two weeks later, the follow-up appointment confirmed Gustavo could see perfectly.  “He loves his glasses and won’t take them off,” Gustavo’s mother said. “He even sleeps with them.  Now he loves school and is reading all the time.”

Rene Galvan, UCLA Mobile Eye Clinic ophthalmic technician, recalls this story and many others like Gustavo.  “Children we’ve treated who now wear glasses will tell us that they were missing things written on the whiteboard because they couldn’t see it––even if they were sitting in the front of the classroom. Or they realize that when they were on the playground they weren’t able to connect the bat with the baseball because they couldn’t see the ball clearly.  Sometimes you don't know what you don't know.”

According to the American Academy of Ophthalmology, 80% of preschoolers like Gustavo do not receive vision screenings. 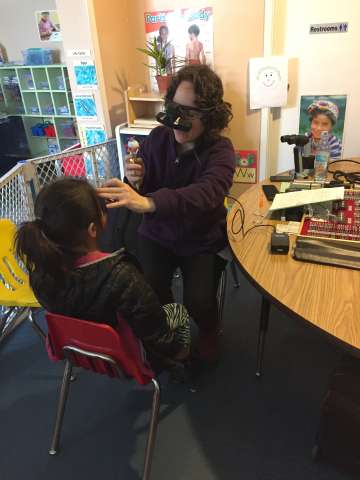 Angelina was a 12-month old girl from South Los Angeles. Her development was delayed; she did not crawl, and she would just sit, forlorn and sobbing. Angelina's family, living below the poverty line, had nowhere to turn to until they went to the UCLA Mobile Eye Clinic. There, Dr. Anne Coleman discovered the cause.

Dr. Coleman, the UCLA Mobile Eye Clinic's director, recalled, "We learned that Angelina had congenital glaucoma. The pressure in Angelina's eyes was very high, which was causing pain."

An operation by Dr. Coleman stopped the progression of glaucoma. As Dr. Coleman noted, this resulted in a striking change. "We took off the bandages, and Angelina wasn't crying––she was looking around. When she came for a follow-up visit, she was running around the office. Angelina had never done anything because she could not see; all of a sudden she could see and navigate her world, which transformed her life." 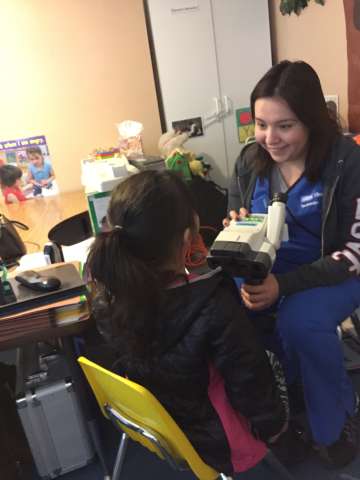 Samantha, a preschooler, was examined as part of the Child Vision Program sponsored by First Five LA. Samantha’s mother is extremely grateful for the services that UCLA provided because it revealed that Samantha was legally blind. Her comprehensive eye examination showed that she had a visual acuity of 20/200 in addition to severe myopia, amblyopia, and strabismus. Samantha was born with many obstacles to overcome; she had birth defects and had previous trouble walking, talking, and seeing. Since Samantha received her eyeglasses from the UCLA Mobile Eye Clinic, her mom has noticed that her daughter’s motor skills have improved enormously. She is walking better, participating in more physical activities, and is becoming all around more confident in her movements. Samantha's new eyeglasses are a significant improvement in the quality of life for both her and her family. Her mom told us that Samantha never leaves home without her glasses.