Within the last decade, the surgical management of thyroid nodules has undergone several key changes. In his talk on “Thyroid Cancer Surgery Updates,” Dr. Michael Yeh, Professor of Surgery at UCLA, discussed the evolution of his group’s practice since 2011. The introduction of molecular testing for indeterminate nodules, changes in the American Thyroid Association guidelines for the treatment of thyroid cancer, and refined use of surgeon-performed ultrasound have led to a new approach to thyroid surgery. 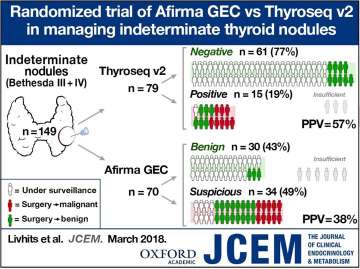 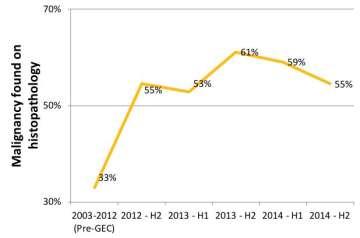 The rate of reoperation to remove the remainder of the thyroid gland after an initial “indeterminate nodule” resection has been in flux over this same time period. Initially, the percentage of diagnostic partial thyroidectomies that prompted completion thyroidectomies increased – this corresponded to a higher percentage of surgically removed indeterminate nodules actually being cancerous on final pathology. However, with the publication of the 2015 American Thyroid Association guidelines, thyroid lobectomy was increasingly accepted as adequate treatment for many differentiated thyroid cancers1. Thus, even when a diagnostic lobectomy yielded a cancerous nodule, no further treatment was necessary in many cases. The introduction of the diagnosis NIFTP (noninvasive follicular thyroid neoplasm with papillary-like nuclear features) served to downgrade a subset of thyroid disease from cancerous to non-cancerous, thereby allowing more surgical options (Figure 3). Perhaps in part due to the number of lobectomies performed for thyroid cancer and in part due to a more general philosophy of minimalism, the use of radioactive iodine ablation has decreased substantially in recent years as well. 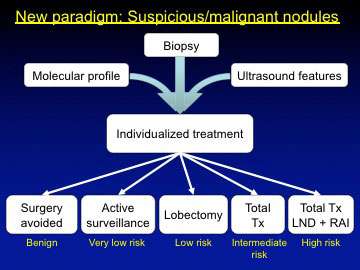 Figure 3. Patients presenting with suspicious or malignant thyroid nodules now have many more options than even a decade ago, as molecular testing, surgeon-performed ultrasound, and new national guidelines have allowed for individualized care. Historically, most patients with a suspicious biopsy result would have a thyroid lobectomy for diagnosis, and those with thyroid cancer would typically undergo total thyroidectomy with lymph node dissection and post-operative radioactive iodine. Now, molecular testing can allow some patients with suspicious nodules to avoid surgery with or without active surveillance. Patients with thyroid cancer can often be treated successfully with thyroid lobectomy if the tumor is low-risk by ultrasound and pathologic features or with total thyroidectomy alone for intermediate-risk tumors.

While the general trend has been toward less extensive surgery for small tumors, total thyroidectomy remains recommended for certain patients, especially those with tumor extension beyond the thyroid capsule. At UCLA, surgeon-performed ultrasound has been instrumental in stratifying the risk of tumor extension and thus allowing for better operative planning. When ultrasound was negative for thyroid capsular distortion, a long interface between the tumor and the thyroid capsule, and tracheal indentation by the tumor margin, then thyroid lobectomy could be safely performed (Figure 4). In their experience, none of the patients who lacked those worrisome ultrasound features had tumor extension beyond the thyroid. They are also more likely to recommend total thyroidectomy for certain non-tumor factors, such as for patients who are already on thyroid hormone, have a high-normal preoperative TSH, have extensive family history of hypothyroidism, or prefer not to follow contralateral nodules post-operatively. 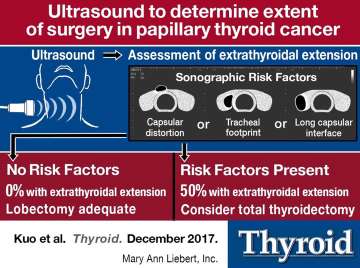 Figure 4. Surgeon-performed ultrasound is one of the tools used to stratify a patient's risk of having a more aggressive cancer. When the thyroid capsule is distorted, the tumor has a long interface with the thyroid capsule, or the tumor appears to be creating a "footprint" on the trachea, then total thyroidectomy may be more strongly recommended. In the absence of these features, the surgeon could reliably predict that there would not be extension of the tumor beyond the thyroid gland -- in these cases, thyroid lobectomy is adequate assuming there are no other contraindications.

The institution of molecular testing and significant changes in national guidelines have opened the door for a much more individualized approach to the patient with a thyroid nodule in 2018. Overall, we have moved toward less surgery, both less frequent and less invasive. Dr. Yeh emphasized that with the increasing complexity of diagnostic and therapeutic tools, change needs to come from the entire patient team working as a unit. 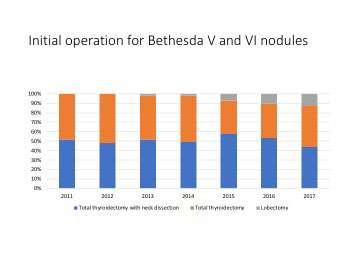 Figure 5. With a wider variety of options to treat thyroid cancer in 2018, the trend has been toward less extensive surgery for patients with malignant or likely malignant nodules.