At UCLA Health, we offer hope to patients who need lung transplants.

The Force is with this young transplant patient 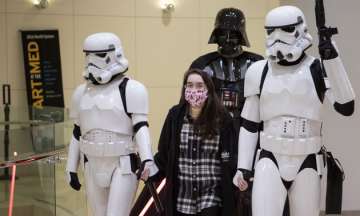 A 24 year-old woman with cystic fibrosis is starting the new year with new hope thanks to help from the U.S. Air Force, Chewbacca from "Star Wars" and a UCLA surgeon who said yes to a high-risk case.

Kathlyn Chassey of San Antonio, Texas, was born with cystic fibrosis, a genetic disease characterized by the build-up in the lungs of thick, sticky mucus that traps infection-causing bacteria. Chassey's father, Chris, is a chief master sergeant in the United States Air Force. Last November, when her breathing problems worsened. Her condition became critical, and she was placed on life support to take over her breathing function. The only chance of saving her life, doctors warned, was a lung transplant. Read more 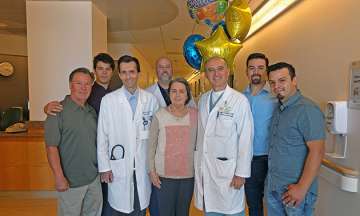 The UCLA Lung Transplant program performed its 1,000th transplant surgery in mid-September, becoming the first program on the West Coast, and one of only seven centers nationwide, to achieve this milestone. The recipient of the donor lungs was Elba De Contreras, 59, from Goleta, California, who suffered from idiopathic pulmonary fibrosis and pulmonary hypertension. The six-hour surgery took place at Ronald Reagan UCLA Medical Center, led by Dr. Abbas Ardehali, surgical director of the lung and heart transplant programs. Read more

The Woman Who Lived